Researchers from more than 50 countries collaborate with the U.S. Department of Energy’s Fermi National Accelerator Laboratory to develop state-of-the-art technologies and solve the mysteries of matter, energy, space and time.

Here is a look at 10 ways they advanced science and technology in 2021. Fermilab and its partners: 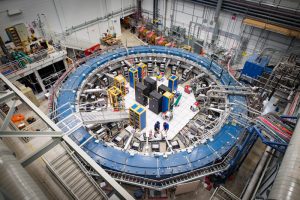 1. Found strong evidence for physics beyond the Standard Model

The long-awaited first results from the Muon g-2 experiment at Fermilab show fundamental particles called muons behaving in a way that is not predicted by scientists’ best theory, the Standard Model of particle physics.The landmark result, made with unprecedented precision, confirms a discrepancy that has been gnawing at researchers for decades. It indicates that muons could be interacting with yet undiscovered particles or forces. 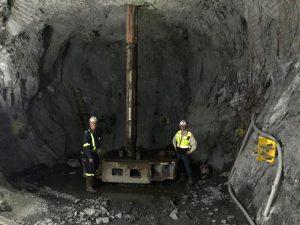 2. Started excavation and construction of detector components for DUNE

The Deep Underground Neutrino Experiment is an international flagship experiment to unlock the mysteries of neutrinos. In May, construction crews started lowering equipment a mile underground and began the excavation of space for the South Dakota portion of the Long-Baseline Neutrino Facility. Scientists and engineers in the UK began the production and testing of components for the first large neutrino detector module to be installed in the facility. The DUNE collaboration also published the design of the near detector. A prototype component of the near detector traveled from the University of Bern to Fermilab for testing with the lab’s neutrino beam. 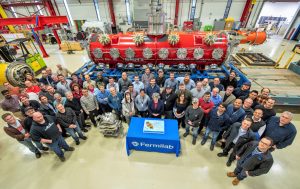 The PIP-II project team and its national and international partners are getting ready for the construction of the new, highly anticipated particle accelerator at Fermilab. Earlier this year, testing wrapped up at the PIP-II Injector Test Facility. The successful outcome paves the way for the construction of the 700-foot-long PIP-II accelerator, which will power record-breaking neutrino beams and drive a broad physics research program at Fermilab. Construction of the PIP-II Cryogenic Plant Building began in August 2020, and the structure of the building now is largely complete. The building will house utilities as well as cryogenic equipment for the new machine. Efforts to use machine learning for the operation of PIP-II and other Fermilab accelerators are underway as well. 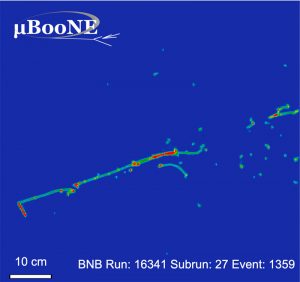 In 2021, Fermilab scientists were co-authors of more than 600 scientific articles, advancing our understanding of energy, matter, space and time and the technologies that drive these discoveries. Top achievements include results from MicroBooNE (a neutrino experiment that looks for evidence for sterile neutrinos) and NOvA (which aims to decipher the neutrino mass ordering); the search for stealthy supersymmetry with the CMS experiment at the Large Hadron Collider; dozens of papers on the Dark Energy Survey, including the most precise measurements of the universe’s composition and growth to date; the discovery of performance-limiting nanohydrides in superconducting qubits; and the world’s fastest magnetic ramping rates for particle accelerator magnets, made with energy-efficient, high-temperature superconducting material. 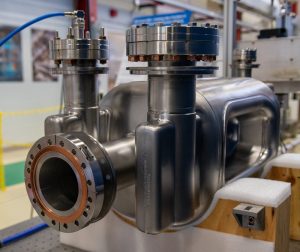 5. Worked on upgrading the LHC and its CMS detector

In Dec. 2020, the U.S. Department of Energy formally approved the full U.S. contribution to the high-luminosity upgrade of the Large Hadron Collider, or HL-LHC, at the European laboratory CERN. Led by Fermilab, collaborators will contribute 16 magnets to focus the LHC’s near-light-speed particle beams to a tiny volume before colliding. They will also deliver eight superconducting cavities, radio-frequency devices designed to manipulate the powerful beams. (They will also provide four spare magnets and two spare cavities.) The new instruments will enable a 10-fold increase in the number of particle collisions at the future HL-LHC compared to the current LHC. Together with upgrades to the CMS detector, the accelerator upgrade will enable physicists to study particles such as the Higgs boson in greater detail. And the increase in the number of collisions could also uncover rare physics phenomena or signs of new physics. 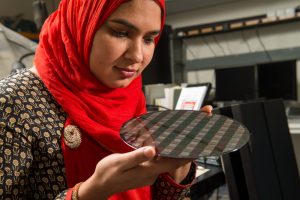 Advances in particle physics and quantum information science are tightly connected. Together with their partners in industry and collaborating institutions, Fermilab scientists and engineers used their expertise to advance quantum research.  Examples include: taking the first steps toward building a quantum computer, designing quantum sensors for dark matter research, developing quantum algorithms, implementing artificial intelligence on a microchip, and building and testing the components of a quantum internet. They all are all part of the many facets of quantum science at Fermilab. This also includes the construction of the MAGIS-100 experiment, which will use free-falling atoms to probe dark matter, gravity and quantum science. 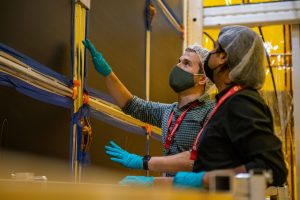 7. Advanced the assembly of new neutrino and muon experiments

In addition to the construction projects mentioned above, Fermilab and its collaborators worked on the assembly of the ICARUS detector and the Short-Baseline Near Detector, both part of the Short-Baseline Neutrino Program to investigate neutrino oscillations and look for new physics. ICARUS scientists saw the first particles in their neutrino detector earlier this year, and SBND scientists are working on the assembly of their liquid-argon detector. Scientists are also working on the magnets and detectors for the Mu2e experiment, which will look for the direct conversion of a muon into an electron. If observed, it would signal the existence of new particles or new forces of nature. 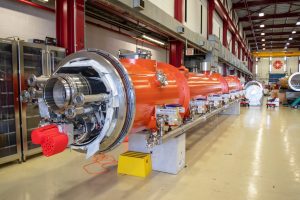 8. Built and delivered the final superconducting particle accelerator component for the world’s most powerful laser

In collaboration with partners at other DOE national labs, Fermilab researchers designed, built and delivered superconducting accelerator cryomodules for upgrading the world’s most powerful X-ray laser, the Linac Coherent Light Source at SLAC National Accelerator Laboratory. With these LCLS-II upgrades, biologists, chemists and physicists will be able to probe the evolution of systems on a molecular level, forming flipbooks of molecular processes using one million X-ray pulses every second. Another upgrade to provide higher-energy particle beams, called LCLS-II-HE, is underway to enable even more precise atomic X-ray mapping. Tests of a verification cryomodule built at Fermilab achieved records far beyond current cryomodule specifications and should result in a 30% improvement compared to LCLS-II. 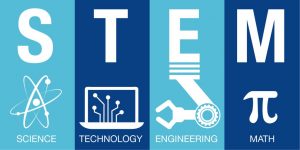 Fermilab is committed to attracting, developing and retaining diverse talent and cultivating an inclusive work environment that supports scientific, technological and operational excellence. The new Carolyn B. Parker Fellowship, named for the first African-American woman to earn a postgraduate degree in physics, presents an opportunity for Black and African-American postdoctoral scholars to work for up to five years in the Superconducting Quantum Materials and Systems Center at Fermilab. The new Sylvester James Gates, Jr. Fellowship offers a five-year appointment in the Theory Division at Fermilab. It prioritizes the inclusion of first-generation college graduates and the representation of historically and contemporarily minoritized individuals underrepresented in theoretical physics. The new Accelerator Science Program to Increase Representation in Engineering, or ASPIRE, fellowship provides students with immersive learning experiences on world leading particle accelerator projects at Fermilab. The fellowship is for undergraduate and graduate engineering students in underrepresented groups. To learn about other programs at Fermilab to increase diversity and inclusion in science, technology, engineering and math, visit our website. 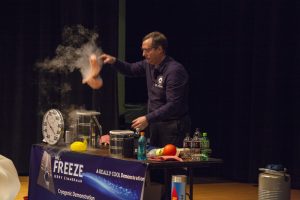 Fermilab offered many online STEM education and outreach programs in 2021. Live programs included the virtual Family Open House, Ask a Scientist, STEM career fair, the Saturday Morning Physics program and the Arts and Lecture at Home series, including virtual art exhibits. They attracted viewers from different communities and backgrounds from around the world. Tens of thousands also have watched lectures, physics slams and other programs on the Fermilab YouTube channel. Almost 600,000 people are now subscribed to this channel, which is known for the popular science explainer videos featuring Fermilab scientist Don Lincoln. This year, the channel also launched the new Even Bananas series with Kirsty Duffy and other scientists, who explain the mysteries of the neutrino.