Batavia, Ill.- With the completion of its hundredth surface detector, the Pierre Auger Observatory, under construction in Argentina, this week became the largest cosmic-ray air shower array in the world. Managed by scientists at the Department of Energy’s Fermi National Accelerator Laboratory, the Pierre Auger project so far encompasses a 70-square-mile array of detectors that are tracking the most violent – and perhaps most puzzling – processes in the entire universe.

Cosmic rays are extraterrestrial particles-usually protons or heavier ions-that hit the Earth’s atmosphere and create cascades of secondary particles. While cosmic rays approach the earth at a range of energies, scientists long believed that their energy could not exceed 1020 electron volts, some 100 million times the proton energy achievable in Fermilab’s Tevatron, the most powerful particle accelerator in the world. But recent experiments in Japan and Utah have detected a few such ultrahigh energy cosmic rays, raising questions about what extraordinary events in the universe could have produced them.

“How does nature create the conditions to accelerate a tiny particle to such an energy?” asked Alan Watson, physics professor at the University of Leeds, UK, and spokesperson for the Pierre Auger collaboration of 250 scientists from 14 countries. “Tracking these ultrahigh-energy particles back to their sources will answer that question.”

Scientific theory can account for the sources of low- and medium-energy cosmic rays, but the origin of these rare high-energy cosmic rays remains a mystery. To identify the cosmic mechanisms that produce microscopic particles at macroscopic energy, the Pierre Auger collaboration is installing an array that will ultimately comprise 1,600 surface detectors in an area of the Argentine Pampa Amarilla the size of Rhode Island, near the town of Malargüe, about 600 miles west of Buenos Aires. The first 100 detectors are already surveying the southern sky.

“These highest-energy cosmic rays are messengers from the extreme universe,” said Nobel Prize winner Jim Cronin, of the University of Chicago, who conceived the Auger experiment together with Watson. “They represent a great opportunity for discoveries.”

The highest-energy cosmic rays are extremely rare, hitting the Earth’s atmosphere about once per year per square mile. When complete in 2005, the Pierre Auger observatory will cover approximately 1,200 square miles (3,000 square kilometers), allowing scientists to catch many of these events.

“Our experiment will pick up where the AGASA experiment has left off,” said project manager Paul Mantsch, Fermilab, referring to the Akeno Giant Air Shower Array (AGASA) experiment in Japan. “At highest energies, the astonishing results from the two largest cosmic-ray experiments appear to be in conflict. AGASA sees more events than the HiRes experiment in Utah, but the statistics of both experiments are limited.”

The Pierre Auger project, named after the pioneering French physicist who first observed extended air showers in 1938, combines the detection methods used in the Japanese and Utah experiments. Surface detectors are spaced one mile apart. Each surface unit consists of a 4-foot-high cylindrical tank filled with 3,000 gallons of pure water, a solar panel, and an antenna for wireless transmission of data. Sensors register the invisible particle avalanches, triggered at an altitude of six to twelve miles just microseconds earlier, as they reach the ground. The particle showers strike several tanks almost simultaneously.

In addition to the tanks, the new observatory will feature 24 HiRes-type fluorescence telescopes that can pick up the faint ultraviolet glow emitted by air showers in mid-air. The fluorescence telescopes, which can only be operated during dark, moonless nights, are sensitive enough to pick up the light emitted by a 4-watt lamp traveling six miles away at almost the speed of light.

“It is a really beautiful thing that we have a hybrid system,” said Watson. “We can look at air showers in two modes. We can measure their energy in two independent ways.”

The Pierre Auger collaboration is in the process of preparing a proposal for a second site of its observatory, to be located in the United States. Featuring the same design as the Argentinean site, the second detector array would scan the northern sky for the sources of the most powerful cosmic rays.

Funding for the $55 million Pierre Auger Observatory in Argentina has come from 14 member nations. The U.S. contributes 20 percent of the total cost, with support provided by the Office of Science of the Department of Energy and by the National Science Foundation. A list of all participating institutions is available at http://auger.cnrs.fr/collaboration.html.

More information on the experiment is at http://www.auger.org/ 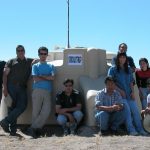 In October 2003, Argentinean technicians finished the installation of the 100th surface detector, making the Pierre Auger Observatory the largest cosmic-ray experiment in the world. 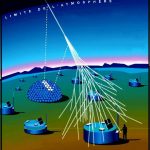 High-energy cosmic rays create extensive air showers that begin many miles above the surface. The Pierre Auger collaboration uses both fluorescence detectors, which detect ultraviolet light emitted by air showers, and surface detectors, which record particles as they traverse tanks filled with 3,000 gallons of pure water.

Animation of an air shower striking detectors of the Pierre Auger Observatory. 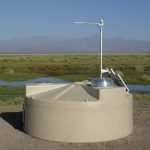 The Pierre Auger Observatory is located in the Pampa Amarilla, or Yellow Pampa, an area 600 miles west of Buenos Aires, near the town of Malargüe. When complete, 1,600 surface detectors, spaced a mile apart, will cover an area of the size of Rhode Island. 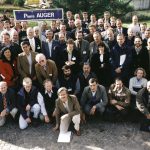 Some of the 250 scientists of the Pierre Auger collaboration, which encompasses 33 institutions in 16 countries. 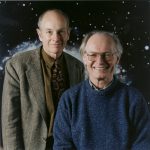 Physicists Jim Cronin (left, University of Chicago) and Alan Watson (University of Leeds) proposed the Pierre Auger Observatory in the 1990s to solve the mystery of ultrahigh-energy cosmic rays. Cronin won a share of the 1980 Nobel Prize in Physics for the discovery of symmetry violations in subatomic processes involving matter and antimatter. Photo: Fermilab