BATAVIA, Illinois — Scientists at the Department of Energy’s Fermi National Accelerator Laboratory will announce on Friday, June 18 the observation of an unexpected new member of a family of subatomic particles called “heavy-light” mesons. The new meson, a combination of a strange quark and a charm antiquark, is the heaviest ever observed in this family, and it behaves in surprising ways — it apparently breaks the rules on decaying into other particles.

As a rule, the more massive the meson, the shorter its lifetime before decaying into other particles. But not this time. This heavy meson lives three times longer than its lighter relatives.

SELEX deputy cospokesperson Peter Cooper of Fermilab said this kind of contradiction is “just not supposed to happen. If this meson played by the normal rules of the strong interaction,” Cooper said, “it should fall apart quickly and we never would have seen it.”

In another contradiction, SELEX also saw the new meson decay about six times more often than expected into an eta particle (a rarer but well-studied member of the meson family), rather than into the expected particle, called a K meson.

“It’s like watching a water bucket with a large hole and small hole in the bottom,” Russ said. “For some reason, the water is pouring out the small hole six times faster than it’s coming out of the large one. Something unusual must be going on inside the bucket.”

This first observation of the new meson expands the picture of the ways in which the strong force works within the atomic nucleus. The same strong force that keeps the nuclei of atoms from flying apart also controls the decay rates of particles. Why does the new meson break the highly predictable decay pattern of other mesons? How many other patterns might there be?

Mesons tend to be a short-lived tribe. Their lifetimes are so short that they show themselves as a range of masses-what particle physicists call the particle’s “width.” This unusual effect — a particle’s mass being uncertain because it lives a very short time — is a direct result of the Heisenberg uncertainty principle. It is a vivid demonstration that these particles live in a quantum world. The meson lifetime is 10 (-24) seconds, or about the amount of time it takes light to cross a proton. By comparison, light travels one foot in a billionth of a second.

A meson is made up of a quark and an antiquark, bound together by the strong force. The combination of a massive quark, like the charm quark, with a light quark (in this case, a strange quark) presents an especially interesting laboratory in which to study the strong force. In heavy-light mesons, the motion of the quarks is simpler than in other mesons — the heavy quark sits still and physicists only have to keep track of the motion of the lighter quark completing the system.

“This new particle is showing a possible deviation from the expected path that most mesons take,” Fermilab theorist Christopher Hill confirmed. “It suggests that some intriguing new dynamical aspect of the strong force is at work, and it opens the door for many future explorations, at Fermilab and around the world.”

The discovery by the members of the SELEX collaboration uses data from their fixed-target experiment at Fermilab’s Tevatron, the world’s highest-energy particle accelerator. SELEX studies the results of protons colliding with solid targets of copper and diamond. While the SELEX experiment stopped taking data in 1997, an extended analysis revealed this new particle lurking within their data.

In the spring of 2003, experiments at three electron-positron colliders — BABAR at Stanford (Cal.) Linear Accelerator Center, CLEO at Cornell University in New York, and BELLE at KEK in Tsukuba, Japan — announced the discovery of a new pair of charm-strange mesons. While these mesons had been predicted theoretically, their properties didn’t match theory. They had such low masses that they could not decay in the preferred way, so they had long lifetimes.

Following the 2003 announcements, SELEX began to reexamine its own results to seek out more eta particles and determine whether they existed in more interesting combinations. But before any results could be deemed conclusive, the collaboration had to prove that it understood the unique photon detector well enough to vouch for that type of data. Several Russian collaborators within SELEX conducted painstaking tests of the detector, which they had built; their answer was “yes.”

The SELEX discovery adds yet another contradiction to the conventional predictions of meson behavior. The known symmetries of heavy-light mesons predict that other active experiments, such as BABAR, CLEO and BELLE, as well as Fermilab’s FOCUS experiment, will be able to see this particle and various partner particles in their data, expanding even further our picture of the strong force, and building on the SELEX result.

The collaboration has submitted a paper describing the result –“First Observation of a Narrow Charm-Strange Meson DsJ+(2632)->Ds(eta)+ and D0K+” — to Physical Review Letters. The result is being presented on Friday, June 18 in a seminar at Fermilab by physicist Anatoly Evdokimov of the Institute of Theoretical and Experimental Physics, Moscow, Russia.

A relatively small experiment by the standards of particle physics, SELEX is made up of about 125 physicists from 21 institutions around the world. Included are six institutions in the U.S., four in Russia, three in South America, two in Italy, and one each in Turkey, Germany, Mexico, the United Kingdom, Israel and the Peoples Republic of China.

Fermilab is a U.S. Department of Energy-Office of Science national laboratory, operated under contract by Universities Research Association, Inc. 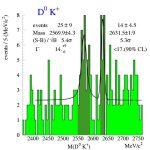 The distribution of the D0 K+ combined mass for all candidates in the data sample including Anti-particle combinations (D0bar K–). There are two clear peaks. The lower, at a mass of 2570 MeV/c2, is the known DsJ(2573) meson, discovered in 1994. This peak’s width is more than the detector resolution showing the the “natural width (Gamma)” of this state due to its short lifetime. The value measured for the natural width of 14 MeV/c2 is consistent with previous measurements. The detector resolution is better by a factor of 2 in this D0 K+ decay mode than in the Ds+ eta0 mode making Selex more sensitive to the lifetimes of these state in this decay mode.

The second peak is at a mass of 2632 MeV/c2 – the same mass (within uncertainties) seen in the Ds+ eta0 decay mode. The width of this peak is consistent with the resolution of the detector. This state very likely lives several times longer than the lower mass state. Both peaks have high statistical significance (more than 5 standard deviations). 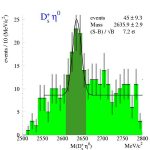 The distribution of the Ds+ eta0 combined mass for all candidates in the data sample including Anti-particle combinations (Ds– eta0). There is a clear peak at a mass of 2635 MeV/2 with a very high statistical significance (more than 7 standard deviations). The width of this peak is completely consistent with what is expected from the resolution of the detector. 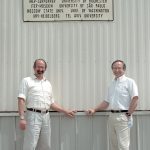 Peter Cooper (left) and Jim Russ frame the list of SELEX institutions at the experiment hall. 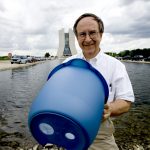 SELEX spokesperson Jim Russ of Carnegie Mellon University holds a metaphoric bucket for decays of the newly observed meson and its unexpected decay pattern. Says Russ: “It’s like watching a water bucket with a large hole and small hole in the bottom. For some reason, the water is pouring out the small hole six times faster than it’s coming out of the large one. Something unusual must be going on inside the bucket.” 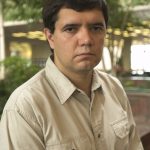 Anatoly Evdokimov of the Institute of Theoretical and Experimental Physics in Moscow, Russia led the analysis leading to the observation of the new meson, and will present the results in a seminar at Fermilab on Friday, June 18. 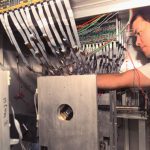