Batavia, Ill.—Officials at the Department of Energy’s Fermi National Accelerator Laboratory announced today that the laboratory has started phase II of the construction of a pioneering facility to advance a technology that will be critical to the next generation of particle accelerators.

The new facility, which will occupy three buildings and host a 460-foot-long test accelerator, will be the first of its kind in the United States.

Fermilab is using $52.7 million in funding from the American Recovery and Reinvestment Act to advance its Superconducting Radio-Frequency R&D program, which includes the construction of the SRF Accelerator Test Facility. Phase I of the construction began in March 2010 with the $2.8 million expansion of an existing building. For phase II, the laboratory has awarded a $4.2 million contract for the construction of two new buildings. Additional ARRA funds will go toward equipment and infrastructure needed for the building’s operation. Fermilab will use the facility to test superconducting radio-frequency components and validate the manufacturing capability of vendors from U.S. industry.

“Our future is going to involve accelerators that use superconducting radio-frequency technology,” said Jay Theilacker of Fermilab’s Accelerator Division. “Building this new SRF test facility is an important step forward.”

The structures operate inside containers known as cryomodules, which chill the cavities to -456 degrees Fahrenheit, a temperature where they can conduct electric current without electrical resistance—hence the term “superconducting.”

Fermilab plans to use the facility to test cryomodules designed for two proposed future particle accelerators: Project X, which would be built at Fermilab, and the International Linear Collider, which could become the world’s next high-energy collider, designed and built through an international effort. The laboratory’s current flagship accelerator, the Tevatron, is scheduled to retire after 2011. It does not use SRF technology.

Michigan-based Barton Malow Inc. will do the civil construction for the SRF test facility, which will consist of three interconnected structures. One will house the SRF test accelerator; the second will accommodate the testing area for cryomodules, which are the building blocks of an SRF accelerator; and the third will house the equipment for a powerful new refrigerator that will cool the cryomodules in the test accelerator and the test area.

Scientists will also use the particle beam generated by the test accelerator to develop and design better instruments and advanced accelerator technology, which have applications in many fields, including medicine and industry.

Since March, Barton Malow subcontractors have hired about 200 Chicago-area tradespeople to work on the test facility expansion.

“There have been about 20 people here per week, all local,” said Barton Malow Project Manager Keith Wiederhold.

He expects that building the two new structures will require a similar number of workers. The company plans to finish the project by the fall of 2011.

Fermi National Accelerator Laboratory is a U.S. Department of Energy Office of Science national laboratory dedicated to research in high-energy physics and related fields. The Fermi Research Alliance LLC operates Fermilab under a contract with DOE. 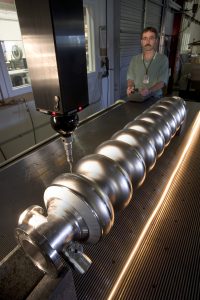 Superconducting radio-frequency cavities will be the technology of choice for the next generation of particle accelerators. The devices are made of pure niobium. They save energy by conducting electricity without resistance, making them a highly efficient technology for accelerators. Fermilab is partnering with U.S. industry and other research institutions to develop and build SRF cavities in cost-effective ways. 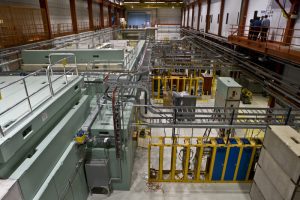 When complete, the test accelerator at Fermilab will be 460 feet long. Scientists will test various accelerator components and systems by sending a beam of electrons through the accelerator. 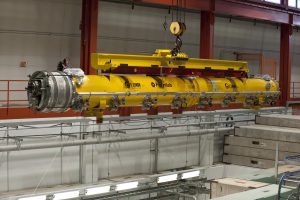 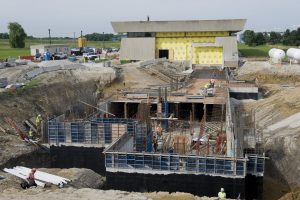 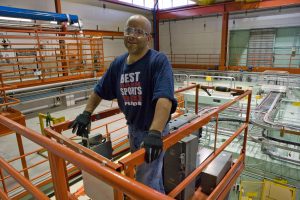 Electrician Stan Kramer spent the better part of 2009 unemployed. In March 2010, he received a call from Arlington Electric that he was needed for electrical work at the accelerator test facility at Fermilab, paid for with funds from the American Recovery and Reinvestment Act. Companies from Batavia, Aurora, St. Charles, Naperville, Elmhurst, Elk Grove Village, Wheeling and other locations are working on the project as subcontractors for Michigan-based Barton Malow Inc. 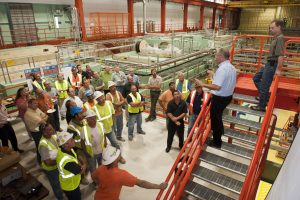 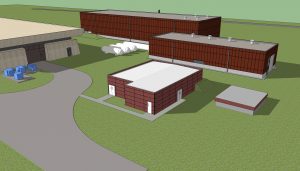 The Department of Energy’s Fermi National Accelerator Laboratory is building a pioneering accelerator test facility thanks to $52.7 million in funds received for R&D in superconducting radio-frequency technology through the American Recovery and Reinvestment Act. The laboratory is working with U.S. industry to boost America’s capability in manufacturing acceleration devices known as SRF cavities. The technology has applications in medicine, nuclear energy and materials science.