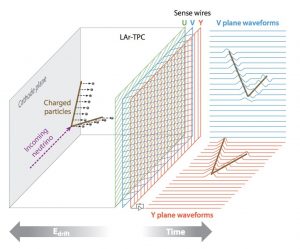 How the MicroBooNE detector works: The neutrino interaction creates charged particles and generates a flash of light. The charged particles ionize the argon atoms and create free electrons. The electrons drift toward the three wire planes under an external electric field and induce signals on the wires. The wires effectively record three images of the particle activities from different angles. The light flashes (photons) are detected by photomultiplier tubes behind the wire planes, which tells when the interaction happens. Scientists use the images from the three planes of wires and the timing of the interaction to reconstruct the tracks created by the neutrino interaction and where it occurred in the detector. Illustration: MicroBooNE collaboration