In February and March, three batches of copper plates arrived at Fermilab and were rushed into storage 100 meters underground. The copper had been mined in Finland, rolled into plates in Germany and shipped across land and sea to the lab — all within 120 days. In the quest to detect dark matter, the mysterious substance making up 85% of the matter in the universe, every day that the copper spent above ground mattered.

“At the surface of the Earth, we’re in a shower of cosmic rays,” said Fermilab scientist Dan Bauer.

When these high-energy particles originating from space strike a copper atom, they can knock out protons and neutrons to produce another atom called cobalt-60. Cobalt-60 is radioactive, meaning that it is unstable and spontaneously decays into other particles. The minuscule number of copper atoms converted into cobalt has no impact on everyday uses for copper. But Bauer and others working on the Super Cryogenic Dark Matter Search must take drastic steps to ensure the copper they use is as pure as possible. 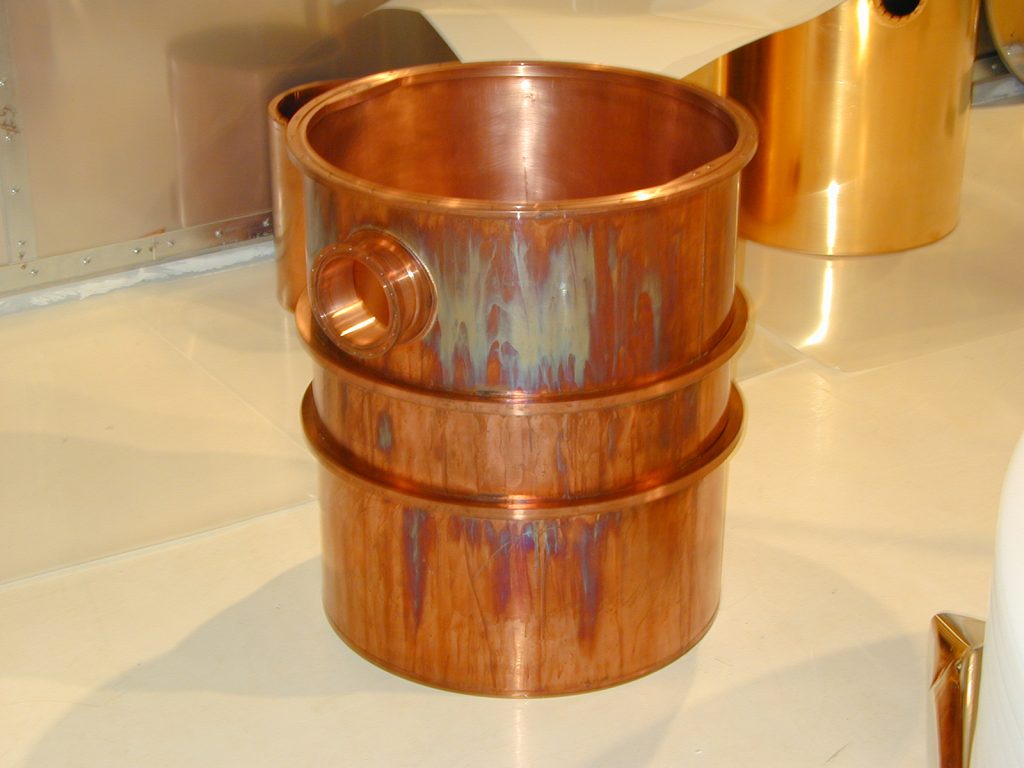 The SNOBOX — the device designed to detect dark matter particles for the SuperCDMS experiment — will use nesting copper cans similar to this one, which was used in the progenitor CDMS experiment at Soudan. Photo: Dan Bauer, Fermilab

The latest in a lineage of similar experiments, SuperCDMS will search for dark matter at SNOLAB, an underground laboratory near Sudbury, Ontario, Canada. The copper plates will eventually take the shape of six oversized soda cans arranged like nesting dolls. The innermost can will house germanium and silicon devices designed to detect hypothesized weakly interacting massive particles, or WIMPs, especially those with less than 10 times the mass of a proton. The vacuum-sealed outermost can will measure a little over a meter in diameter. The whole contraption, dubbed the SNOBOX, will be linked via a set of copper stems to a special refrigerator that will cool the detectors to a tiny fraction of a degree above absolute zero.

At such frigid temperatures, thermal vibrations are so small that a WIMP could leave a detectable signal upon colliding with an atom.

But “you’re looking for a needle in a haystack with dark matter,” Bauer said. “The best you’re going to get is maybe a few events per year.”

Meanwhile, ordinary matter particles flying through the SuperCDMS detectors could produce extraneous signatures, known as background, that would drown the signals from dark matter interactions. 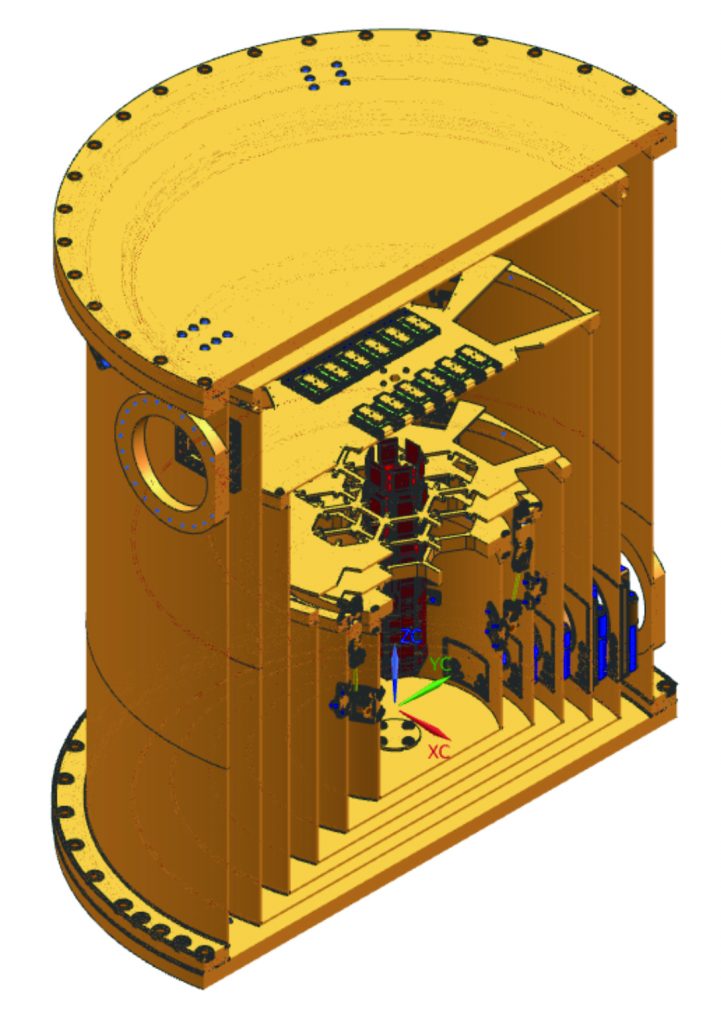 The ultrapure copper plates will be shaped into nested cans, as shown in this cutaway of the SNOBOX design. The hexagonal holes at the center will hold the dark matter detectors. Image: SuperCDMS collaboration

Burying SuperCDMS two kilometers underground and encasing the SNOBOX in layers of lead, plastic and water will screen out almost all the unwanted particles in the environment. But nothing stands between the copper cans and the detectors. And while copper’s superior ability to transport heat makes it ideal for cooling the detectors, any radioactive impurities in the metal would emit background particles.

That brings us back to cobalt-60.

“The bottom line is that the longer the copper sits around on the surface being exposed to cosmic rays, the more cobalt-60 is created,” explained Fermilab’s Matthew Hollister, the manager of the SuperCDMS cryogenics system. “So part of the background budget for the experiment includes a time limit for surface exposure.”

Cobalt-60 is not the only impurity to worry about. Radioactive isotopes of uranium, thorium and potassium occur naturally in Earth’s crust, so the SuperCDMS team had to buy copper sourced from a mine with as little of these metals as possible. Nonradioactive impurities matter, too — they can decrease the copper’s ability to conduct heat, thus making it harder to keep the detectors cold. In total, the copper for SuperCDMS must be over 99.99% pure with fewer than 0.1 parts per billion of radioactive impurities.

Between intrinsic impurities and those introduced through cutting, rolling and transporting the copper, the plates now sitting underground at Fermilab are not quite pristine.

“A lot of the process is not something that we have direct control over,” Hollister said. “Some of it really is a shot in the dark as to what we’re going to end up with at the end of the day.” 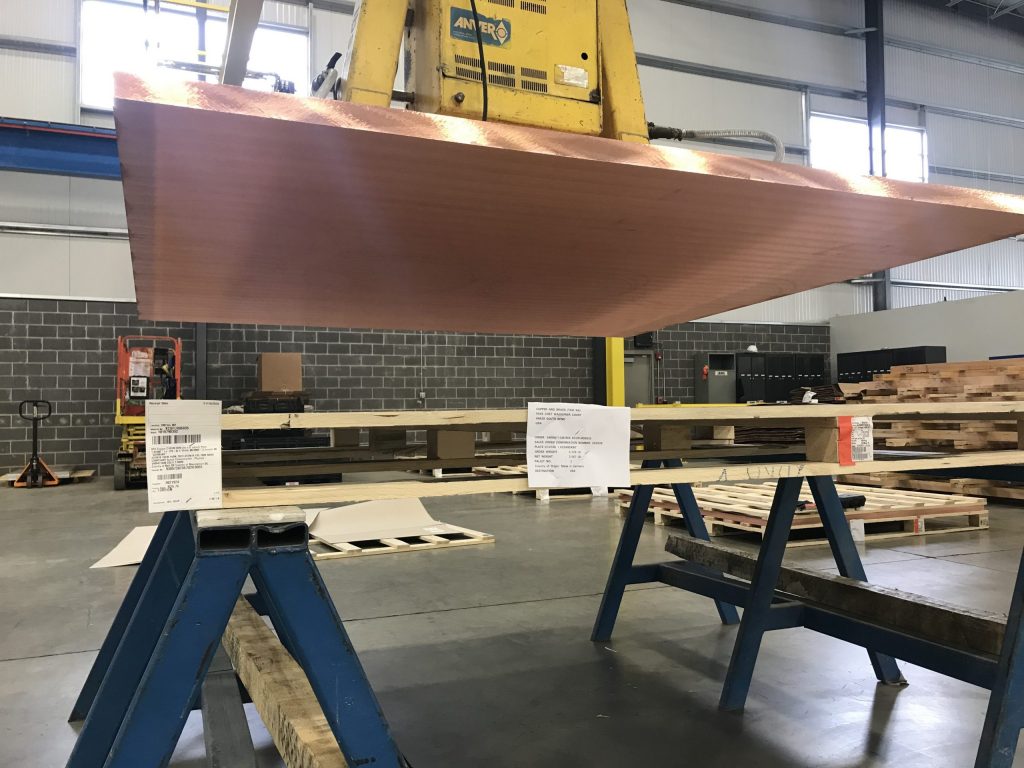 After traversing the Atlantic Ocean, the copper plates for SuperCDMS were delivered to a plant in South Bend, Indiana, before being brought to Fermilab for storage underground. Photo: Luke Martin, Fermilab

After receiving the plates, the researchers sent samples to the U.S. Department of Energy’s Pacific Northwest National Laboratory for detailed testing to quantify the remaining impurities. Soon, the plates will leave Fermilab for fabrication, and the cobalt clock will be ticking once again until the cans reach their home at SNOLAB.

“The last step before we take them underground will be to spray them with an acid etch that will take off some tens of microns of the surface,” Bauer said.

A solution of hydrogen peroxide and diluted hydrochloric acid will remove any surface impurities that have accumulated in the manufacturing process. And a weak citric acid solution will preserve copper’s high thermal conductivity by protecting it from oxidizing over the course of the experiment.

The SuperCDMS collaboration plans to begin collecting data in 2022. All in all, this iteration of the experiment is aiming for background levels 100 times lower than its predecessor, thanks in large part to the purity of the copper. With the increased sensitivity, researchers hope to spot any low-mass WIMPs that might be in the neighborhood.

“This program’s been quite a long time in development, so it’s good to see it starting to come together,” Hollister said. “The SNOBOX is really the last major piece, so we’re looking forward to getting this thing installed and getting it operational as soon as we can.”

SuperCDMS research on dark matter is supported by DOE’s Office of Science and the National Science Foundation, as well as the Canada Foundation for Innovation and SNOLAB.