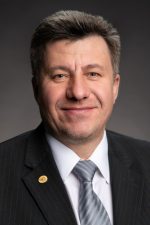 Vladimir Shiltsev, Distinguished Scientist at the Department of Energy’s Fermilab, has been elected as foreign correspondent academician of the Class of Physical Sciences of the Academy of Sciences of Institute of Bologna.

Founded in 1690, the Bologna Academy is one of the oldest scientific academies in the world and is closely associated with the University of Bologna. Among its members were scientists Daniel Bernoulli, Mikhail Lomonosov, Luigi Galvani, Dmitri Mendeleev, Marie Curie, Guglielmo Marconi and Albert Einstein.