Beneath its surface, a proton teems with activity.

You’ve probably heard that particles such as protons have mass and charge. They also have a property called spin. Technologies such as magnetic resonance imaging harness the proton’s spin to see inside the human body.

While scientists know how to harness spin, they’re still piecing together the story of where a proton’s spin comes from. The SpinQuest experiment at the Department of Energy’s Fermilab may help us understand what the components of spin actually are.

Spin is represented using unitless numbers such as ½ or 1, and, like mass or charge, is an intrinsic property of particles. Protons have a spin of ½ and two orientations: spin up and spin down.

Protons are composed of even smaller particles called quarks and gluons, which have their own spin.

Early proton spin models represented rice porridge. A glutinous rice, signifying the gluons, formed a base for tastier ingredients, namely three quarks bubbling to the surface. In this model, the surface quarks that contributed to the proton’s spin are united by gluons. 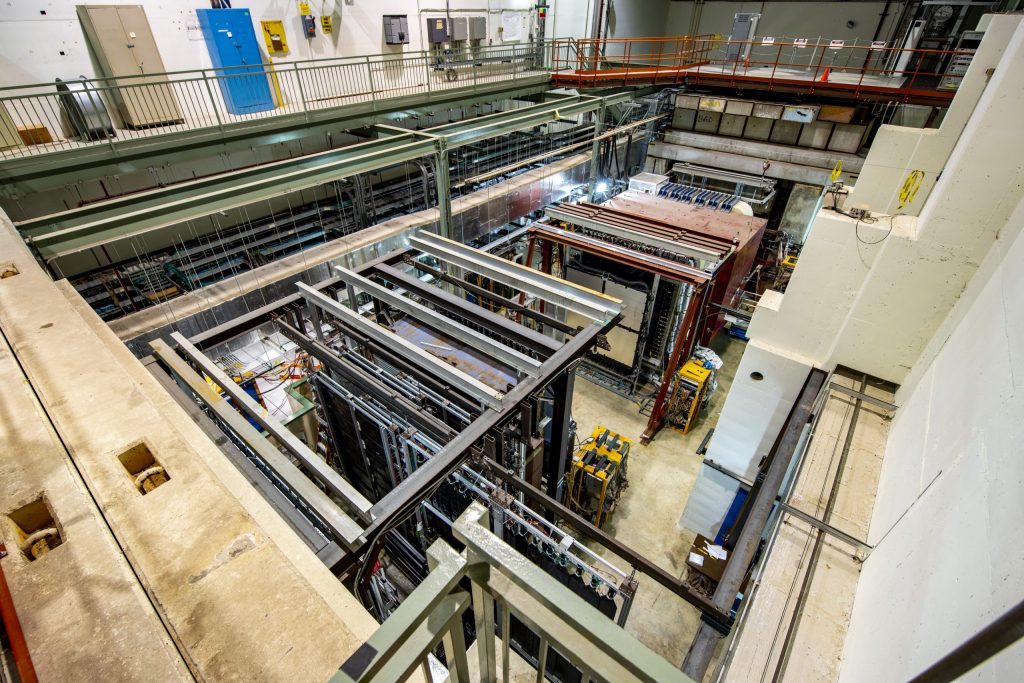 In SpinQuest, protons will be fired at a polarized target, shown here. Scientists will measure two different angles related to the particles that result from the beam-target interaction: the angle between a flat surface formed from the resulting particle tracks and the orientation of the target proton’s spin when it points up, and another angle when the target proton’s spin points down. The angle is connected to how the sea quarks contribute to proton spin. Photo: Reidar Hahn, Fermilab

Scientists realized that the rice porridge model oversimplified reality when their experiments yielded an unexpected result: The spins of a proton’s surface quarks did not add up to a proton’s spin-½.

The closer a proton’s surface quarks are to each other, the more mischief they drum up. As it turns out, when the surface quarks get close enough, they exchange gluons, and the gluons themselves generate even more quarks in the form of quark-antiquark pairs. The quark-antiquark pairs, called “sea quarks,” are like carbonation bubbles, disappearing as quickly as they emerge.

Today, spin models are more akin to a potato salad within which many ingredients, including surface quarks, gluons, sea quarks and the interactions among them, meld and contribute to the spin of a proton.

SpinQuest will be one of the first experiments to directly test whether the sea quarks, through their own orbiting motion, are components of proton spin. SpinQuest is supported by the DOE Office of Science.

Scientists theorize that the sea quarks might balance the books on proton spin. To investigate, they will look oppositely charged muons produced in the SpinQuest experiment.

“The angle between the muon plane and the proton spin polarization is believed to be directly connected to how the sea quarks contribute to proton spin,” said Kun Liu, co-spokesperson for SpinQuest and scientist at Los Alamos National Laboratory.

If SpinQuest scientists see that the angle changes with target proton spin orientation, they can conclude that sea quarks contribute to a proton’s spin in some way, pointing researchers to the sea quarks for the missing components of a proton’s spin. No difference, and scientists need to reexamine the theoretical underpinnings of proton spin.

Another project for scientists will be to analyze data from the SpinQuest spectrometer in a search for dark sector particles. This separate experiment could revolutionize our understanding of fundamental structures and interactions in the universe.

“We are able to conduct this dark sector search without diverting any of the proton beam or requiring additional technology,” Liu said. “Because this area of study has such great scientific and discovery potential, we thought it imperative that we also pursue this other fascinating line of inquiry, called a parasitic mode, while SpinQuest is running.”

Setting records in a reuse and recycle effort

Although the experiment will use existing equipment with minor modifications, it was still challenging to build.

“SpinQuest leverages the power of Fermilab’s Main Injector accelerator, but this has created some challenges for the custom-built, polarized target,” said SpinQuest co-spokesperson Dustin Keller and professor at the University of Virginia. “In overcoming these, we might very well set some records.”

The target, which will operate at 1 kelvin, will be subject to the highest-intensity proton beam ever to hit such a target. Once installed and operational, the target and the superconducting magnet that polarizes it will be under constant threat. Bombarding protons will generate heat in both the target and superconducting magnet, excess energy that may limit the potential of the experiment.

To combat the heat load, scientists and engineers assembled a large pumping system that works in tandem with a cryogenic refrigerator developed at the University of Virginia to produce one of the highest-cooling-power evaporation systems to date. The system will keep the target cold and polarized even while under the eye of the intense proton beam.

Such challenges only bring the collaboration together.

“This experiment really gets back to Fermilab’s roots,” said Rick Tesarek of Fermilab, one of the lead scientists on SpinQuest. “It’s a small experiment making a hard measurement with a dedicated group of people, mostly students and postdocs, working to produce a result they only have read about in textbooks.”

After first beam, which is expected in spring 2021, scientists will commission their detector, turn on the target and make sure both operate well under the high-intensity proton beam.

Then, they will start collecting data.

Scientists around the world await results that may change our theoretical understanding of spin, spark new experiments, discover a dark realm of particles or all of the above.

The SpinQuest collaboration consists of 50 individuals from 13 institutions from around the world.