Editor’s note: Below is a press release issued by the Department of Energy’s Lawrence Berkeley National Laboratory announcing Fermi National Accelerator Laboratory’s participation in and commitment to the scientific journal name-change process for transgender and nonbinary researchers.

“Providing a simple, unified mechanism for transgender, nonbinary scientists to change their name on published research work is an important milestone for the scientific community. I know the anguish and distress that comes from having to choose between being forced to out yourself and carry an identity it may have taken years to escape or being distanced from documentation of past work and degrees,” said Erica Snider of Fermilab’s Scientific Computing Division and co-leader of Fermilab’s Spectrum group.

Fermilab’s Spectrum is a resource group dedicated to building awareness and providing resources for the LGBTQ+ community to foster an environment of understanding, acceptance and equality for all within the laboratory community.

All 17 U.S. national laboratories and many prominent publishers, journals and other organizations in scientific publishing announced today the beginning of a partnership to support name change requests from researchers on past published papers.

“Fermilab fully supports inclusive name change practices. We are committed to working on behalf of our transgender and nonbinary researchers to honor their request to update their names on published papers. It is important they are not deadnamed or misgendered, and their publications should reflect their correct identity,” said Sandra Charles, chief diversity officer at the Department of Energy’s Fermi National Accelerator Laboratory.

This agreement will allow researchers who wish to change their names to more easily claim work from all stages of their careers. It specifically addresses the administrative and emotional difficulties some transgender researchers have experienced when requesting name changes associated with past academic work.

Previously, individual researchers shouldered the burden, administratively and emotionally, of initiating name-change requests with each publisher of their past papers. Many publishers have been independently updating their own policies to address an increasing number of name change requests.

This partnership streamlines these previously ad hoc processes and offers an official validation mechanism to all involved by enabling researchers to ask their respective institutions to pursue name changes on their behalf directly with the publishers and journals. 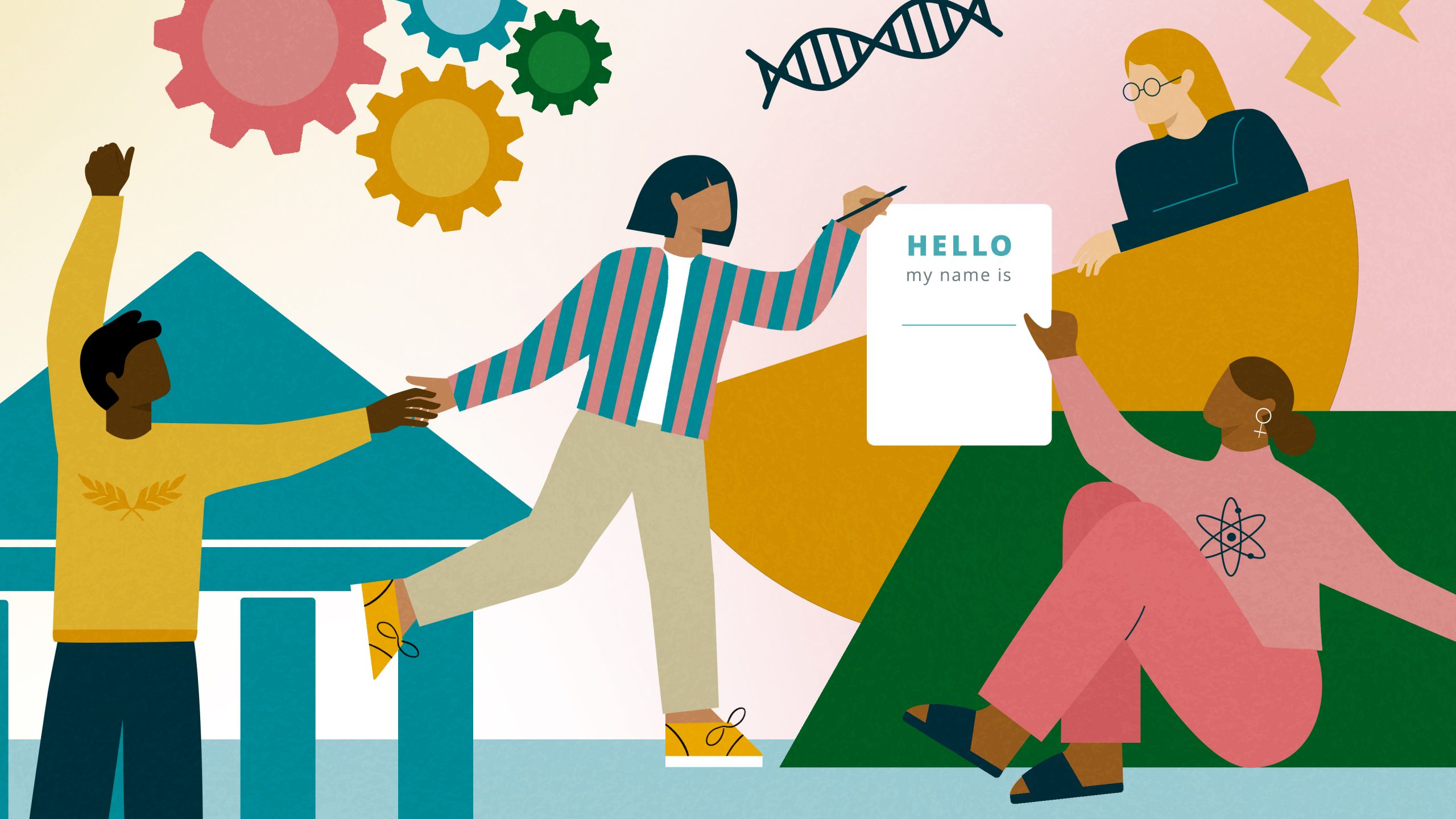 Fermilab is one of the 17 U.S. national laboratories participating in a new agreement that will allow researchers who wish to change their names to more easily claim work from all stages of their careers. Illustration: Jenny Nuss, Berkeley Lab

For researchers of all genders, and transgender researchers specifically, the new process ensures they can rightfully claim ownership of prior work without fear of reprisal under their lived name and be known in their respective fields primarily through their merits as published authors.

As several researchers have attested, having their names updated on previous publications allows them to best represent their full suite of accomplishments. The ability to claim the volume of their work over time has significant implications for maintaining prominence in their area of research and for receiving credit for their academic impact.

The partnership between the national laboratories, major scientific publishers, journals and other organizations represents a commitment to creating a more inclusive culture in STEM fields and STEM publishing in particular. The participating national laboratories will facilitate requests for name changes for any reason, including religious, marital or other purposes, where supported by the policies in place at our publishing partners.

The 17 national laboratories across the United States are pursuing this work in alignment with their respective diversity, equity and inclusion initiatives, not as a result of any federal policy changes, and welcome new partners as the effort advances. Lawrence Berkeley National Laboratory is coordinating the effort.

Fermilab is America’s premier national laboratory for particle physics and accelerator research. A U.S. Department of Energy Office of Science laboratory, Fermilab is located near Chicago, Illinois, and operated under contract by the Fermi Research Alliance LLC, a joint partnership between the University of Chicago and the Universities Research Association, Inc. Visit Fermilab’s website and follow us on Twitter at @Fermilab.