Drinking coffee is a central element of Hispanic culture. In Central and Latin America, the word for coffee varies by the country where the beverage is consumed. In Colombia, coffee is known as tinto; in Costa Rica, it is café chorreado; in Mexico, one drinks café de olla; in Peru, it’s cafe pasado; and in Brazil, it is known as cafezinho. Perhaps the biggest part of drinking coffee is the sense of pride and community it brings to those who partake it together. At U.S. Department of Energy’s Fermi National Accelerator Laboratory, enjoying coffee as a communal experience is a very valued and missed activity among the members of the lab’s Society of Hispanic Professional Engineers. 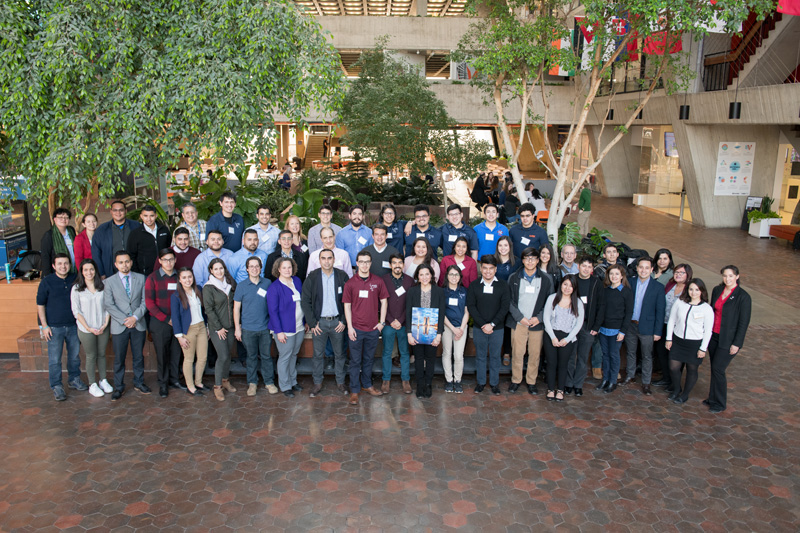 The Midwest regional conference of SHPE with more than 100 attendees was held at Fermilab in 2019. Photo: Reidar Hahn

The Fermilab SHPE Professional Chapter was formed in 2017 with the assistance of Fermilab’s Chief Equity, Diversity and Inclusion Officer Sandra Charles to create a group at the lab that would recognize Hispanic employees and provide a sense of community for them. “When Aria Soha asked me for help to establish a SHPE chapter here at Fermilab, I was excited to complement the Hispanic Latino Forum lab resource group with a professional chapter of a national organization to support our Hispanic engineers. It was also fantastic to see the passion of the founding members to connect with local university chapters and neighboring Hispanic communities,” said Charles.

Coming to Fermilab from New York, Aria Soha is deputy level two manager for the PIP-II particle accelerator project. She attended a performing arts high school and majored in physics at Carnegie Mellon University. Her Hispanic culture is a rich part of her identity, and when Soha came to the lab 19 years ago, she wanted to connect with people of the same culture and bring awareness about STEM careers to the Hispanic community. “I wanted younger people to know that, as a Latino, there are many careers out there. You can be a physicist, engineer, architect or anything you want to be,” said Soha.

After witnessing the success of the Society of Women Engineers chapter at Fermilab as a member, Soha researched the bylaws and mechanics of launching a regional chapter of the Society of Hispanic Professional Engineers. She garnered the interest and participation of 10 Hispanic engineers and went to the EDI office to ask the help of Sandra Charles, who facilitated meetings with the SHPE national organization and met with the regional president in Chicago.

Also involved in the development of fSHPE was Jeny Teheran, a computer security analyst for Fermilab’s cyber security team. When she was 10 years old, Teheran wanted to become an astronomer but growing up in Colombia, she didn’t have the option to study physics to become a physicist, only a physics teacher. A teacher gave her the idea to study computer science. Because of her love of science, she earned a degree in computing systems engineering. After she completed her master’s degree, her dean asked her about her plans, describing an internship Fermilab offered where she would work on neutrino experiments to write better code and use the systems more efficiently. The original plan was to move to the U.S. for one year and then pursue her PhD. After 10 months, though, a position opened with the security team, and she’s been working with the scientists to securely carry out the experiments ever since.

Including Soha and Teheran, a core group of a half-dozen Fermilab associates were the founding force behind fSHPE. By engaging with fellow SHPE professional and student chapters, fSHPE set out to increase awareness for the need of diverse representation in our workforce and contribute to outreach efforts in the Chicagoland area. The goals of the group are to increase the representation of Hispanics across the laboratory and offer unique STEM events to attract, develop and retain diverse national and global talent. These events have included networking and professional growth opportunities to its members.

“fSHPE gives its members that sense of community, a safe place to hang out with people like you with the same culture and it is important to celebrate traditions that are from our home countries,” said Soha. “Before the pandemic, we scheduled a coffee meeting every three months in the cafeteria to enjoy a coffee from a different Latin country each time. It is good socialization to talk about the same cultural issues and traditions that gives us that sense of community. We all need that.”

Both Soha and Teheran said they are looking forward to meeting again in person for coffee with the fSHPE group.

Doing a lot in a short time

Since 2017, fSHPE has accomplished a lot and hosted many successful outreach events. As vice president of outreach, Teheran focused on connecting Fermilab with LatinX students at local universities by inviting them to the lab to build cars, radios and coding projects. She described the events as “amazing to see the light bulbs go off in their heads and the students felt rewarded with their projects.”

In 2019, as president, Teheran elevated the groups’ events by hosting regional conferences at Fermilab, discussing leadership and professional development for the group. In 2020, fSHPE was supposed to host the regional conference, but the event was canceled due to COVID and rescheduled in 2021. This past March, the SHPE regional conference at Fermilab virtually joined more than 600 professionals and students, connecting them to the lab with a 360-degree tour of the MicroBooNE experiment. The event also included a virtual platform that enabled students to talk to recruiters and visit sponsors’ booths, such as Accenture, Boeing, U.S. Department of Energy, Exelon, Hewlett Packard, the Illinois Department of Transportation and Texas Instruments, as well as many universities.

Planning for the future

After in-person restrictions are lifted, fSHPE hopes to return to its regular coffee meetings. The group also looks to host more outreach events, as it is hard to connect and make a strong impact with students virtually. “So much of what the group represents is the sense of community and connection, and when you can’t meet in person, you realize how much you miss being around others who are like you. It centers you and is very refreshing,” said Soha.

In the future, fSHPE hopes to continue fostering a welcoming environment, making sure new LatinX employees of the lab know they have a community around them.