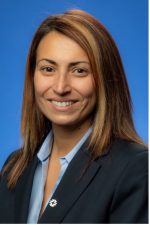 Anna Grassellino received a New Horizons in Physics Prize of $100,000 for her work and impact in the particle accelerator technology and quantum science fields. Photo: Fermilab

The Breakthrough Prize Foundation announced the winners of the 11th annual Breakthrough Prizes, which included the U.S. Department of Energy’s Fermi National Accelerator Laboratory’s Anna Grassellino, director of the Superconducting Quantum Materials and Systems Center, based at Fermilab. Grassellino received a 2023 New Horizons in Physics Prize of $100,000 as a researcher for her work and impact in particle accelerator technology and quantum information science.

Among the three outstanding early-career scientists to be awarded the 2023 New Horizons in Physics Prize, she received the award “for the discovery of major performance enhancements to niobium superconducting radio-frequency cavities, with applications ranging from accelerator physics to quantum devices.”

“Anna’s groundbreaking discovery of nitrogen doping has had a revolutionary impact on SRF technology, put Fermilab on the map as a world leader in SRF, and is a testament to her creativity, focus, hard work and determination,” said Fermilab Director Lia Merminga. “We congratulate her and wish her greater heights yet!”

Grassellino, who comes from Marsala, Italy, studied electronic engineering at the University of Pisa. She received her doctorate from the University of Pennsylvania before joining Fermilab in 2012. Her specialty is superconducting radio-frequency technology, known as SRF, the heart of modern particle accelerators. She has received several awards for the discovery of nitrogen doping, a technique that dramatically increases the efficiency of SRF cavities.

“Dr. Grassellino’s talents and focus in heading a DOE quantum information science center while collaborating with international researchers demonstrates what an accomplished leader she is,” said Harriet Kung, deputy director for science programs in the DOE’s Office of Science. “Anna and her SRF group’s achievements and ambitious research in accelerator technology has had a profound impact on signature DOE facilities, such as LCLS-II and HE.”

She received the award “for the discovery of major performance enhancements to niobium superconducting radio-frequency cavities, with applications ranging from accelerator physics to quantum devices.”

Founded in 2012 by Yuri Milner to recognize individuals who have made profound contributions to human knowledge, the Breakthrough Prize recognizes groundbreaking discoveries in Fundamental Physics, Life Sciences and Mathematics. It is open annually to all physicists — theoretical, mathematical, experimental — working on the deepest mysteries of the universe.

“I am truly honored and extremely thankful to the Department of Energy Office of Science, for giving me the opportunity to work at the frontiers of science,” said Grassellino. “I’m forever thankful to my Fermilab, Northwestern and other SRF colleagues with whom we have made and will continue to make revolutionary discoveries.“