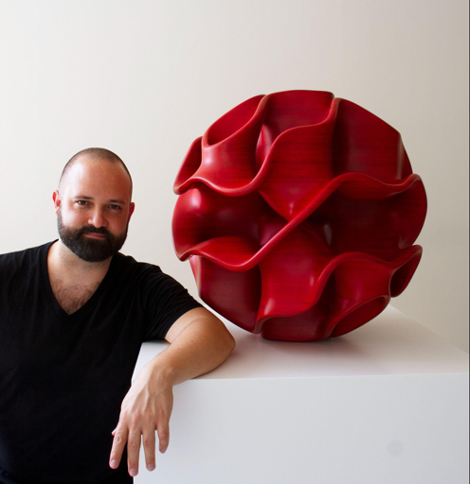 Shown with his 2022 piece, called “Spherical Harmony,” which is made of birch and represents 3D harmonic interactions, Ricardo Mondragon has spent nearly 10 years transferring cosmic music into tangible materials. He will continue his process with particle physics in Fermilab’s 2023 artist-in-residence program. Photo: Ricardo Mondragon

Imagine running your fingers along a standing wave’s oscillating momentum and feeling a powerful sensation that your brain tries to interpret. As you touch “Cubic Entanglement” — a visual representation of a stationary wave’s harmonies — your eyes also marvel at how universal sounds could translate into a physical piece of art. The transfer of music to art is an example of Ricardo Mondragon’s life work, an opus that he will now continue at the U.S. Department of Energy’s Fermi National Laboratory as the lab’s 2023 artist-in-residence.

Mondragon is a visual artist who takes inspiration from harmonies in physics and transforms them into materials. He translates frequencies, vibrations and rhythms into visual works of art, such as a sculpture, paintings or installations. Born and raised in Mexico City with an interest in the arts, Mondragon eventually graduated with a Bachelor of Arts in Music Composition from Columbia College Chicago. He has exhibited his work at the Hyde Park Art Center and the Design Museum of Chicago. Mondragon has lectured at places like the Museum of Contemporary Art Chicago and the Chicago Symphony Center. He has also created a live projection for the Louisville Orchestra. For nearly 10 years, the 38-year-old artist has combined the scientific wonders of the world with art.

“Everything that I do involves physics, that’s just part of the process,” said Mondragon. “The main things my work focuses on are harmonies, which happen everywhere. It happens in physics when you align waveforms.”

These waveforms are the foundation Mondragon uses to build his visual masterpieces.

Each of his works displays harmonic interactions, including ratios, intervals, chords, standing waveforms, frequency entanglements, and Chladni forms in three dimensions — a technique discovered by physicist Ernest Chladni that visualizes acoustics when sand moves on a metal plate. In his opinion, one of his strongest pieces is his 2022 piece, called “Cubic Entanglement,” which captures a perfect 3D representation of the Chladni plate. While this piece has a curvilinear internal body with many different facets and intricacies within and outside of it, it serves as a prime example of his previous and future work.

“For me, music is aligned physics. So, when I do a three-dimensional chord with sine waves, they behave in ratios and tonalities that are aligned frequencies,” Mondragon said. “So that’s why music works. It can make harmonic structures look very beautiful to the eye, especially when they don’t have friction.”

“I hope my art helps convey the message that physics is the language of the universe, just like mathematics or music.” – Ricardo Mondragon

Once inspired by a fractal or waveform interactions, Mondragon takes up to a year to create a piece that follows a multi-step process. First, he starts with sculpting and shaping sounds with digital or analog signal processing techniques through waveform generators — a tool that creates electrical waveforms into various wave shapes: sine, pulse, triangular and squares. After this, he hones in on the details of the waveforms, looks for their harmonies, and then transfers them into a three-dimensional shape with various 3D software programs. After creating the digital models and reshaping the files, he will lastly pick the material that best suits how he wants to portray his work, which also dictates how it’s created, via manual tools, 3D printing, routers, cast or any other process that suits the form.

For example, Mondragon created “Harmonic Interactions” with an aluminum material that underwent a manual casting process and handcrafted “Cubic Entanglement” with a CNC machine–generally used for computerized manufacturing processes. Another piece he added to his unique collection was a 3D-printed sculpture called “The Fourth,” from the musical interval.

Art and physics intersect at Fermilab

Initiated by the Fermilab Art Gallery in 2014, the artist-in-residence program is now in its eighth year. The program aims to foster new artists through mentorship and allow them to build new connections to translate a sector of science into creative and inspiring work to share with the public. A committee of seven comprised of scientists, administrators and artists reviews the submitted applications. Initially, in the program’s first year, the committee received 20 submissions, but this year, the application pool grew to 75 submissions. 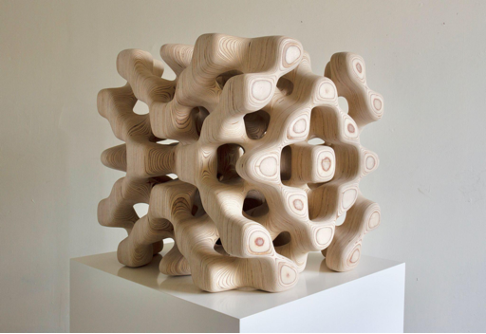 Handcrafted using a CNC machine, which is generally used for computerized manufacturing processes, “Cubic Entanglement” is a 3D representation of the Chladni plate — a technique discovered by physicist Ernest Chladni that visually demonstrates acoustics when sand moves on a metal plate. Photo: Ricardo Mondragon

“This cross-disciplinary aspect of learning is beneficial because everyone comes from different points of view,” said Georgia Schwender, founder and director of the artist-in-residence program. “Professions can grow by just listening to one another and sharing such work with the community.”

Schwender is most excited to see how Mondragon visualizes particle physics because of the many parallels his past work has with higher-energy physics.

“I just loved his different use of materials and the imagery he does with paper,” she said. “It is so exciting, and I just loved his enthusiasm and his dedication to art and communication.”

From Jan. 1 to Dec. 31, Mondragon will embark on an interdisciplinary journey with the artist-in-residence program that will give him the freedom and creative space to create new work while also helping him to suit his needs.

Currently, the artist is sculpting a piece made of birch wood. He also is working on some large-scale screenprints, which is a common printing process of applying ink to a mesh material. Humbled and excited about his year-long residency, he hopes to follow his heart and speak to the hearts of others.

“I hope my art helps convey the message that physics is the language of the universe, just like mathematics or music,” said Mondragon.

The Fermilab artist-in-residence program is funded by the Fermi Research Alliance.