Why Fermilab is making a neutrino detector 800 miles long

From Discover, March 12, 2019: Fermilab, along with the Sanford Underground Research Facility in South Dakota, is starting a new project called the Deep Underground Neutrino Experiment, or DUNE. The goal is to track and study shadowy neutrinos like never before. Fermilab scientists Deborah Harris and Angela Fava discuss the experiment.

From Big Picture Science, Feb. 18, 2019: Fermilab scientist Anne Schukraft is interviewed in this podcast episode about ghostly particles called neutrinos — intriguing partly because they came decades before we had the means to prove their existence.

From Aurora Beacon-News, Fermilab scientists and engineers are hoping to understand neutrinos — tiny particles that many feel hold the key to answering many questions about the universe — and are using a very large thermometer to do it.

Agree to disagree on plans for the next European supercollider

From Nature, Jan. 23, 2019: Fermilab’s neutrino program is mentioned positively in this editorial about plans for the next circular collider in Europe.

From Black Hills Pioneer, Jan. 18, 2019: South Dakota media reports on a public informational meeting that introduced the general contractor/construction manager for the Long-Baseline Neutrino Facility to the community.

The magic of pure argon

From Gasworld: Jan. 1, 2019: Trade publication Gasworld published a three-page cover story on DUNE, focusing on the experiment’s use of liquid argon. Print edition only.

Is there really a fourth neutrino out there in the universe?

From Forbes, Dec. 5, 2018: If there’s a fourth neutrino out there, Fermilab’s Short-Baseline Neutrino Program experiments will lead the way.

From This Week in Science, Nov. 28, 2018: Fermilab scientist Alex Himmel talks about neutrinos, DUNE and the excitement of particle physics. Segment starts at 5:01.

From Sinc, Nov. 30, 2018: Spanish media piece on researchers at the University of Valencia working on DUNE.

This is what neutrinos look like when scientists catch them

From Seeker, Nov. 26, 2018: This 5-minute video discusses DUNE along with other neutrino experiments.

From Earth magazine, Nov. 1, 2018: DUNE is featured in a cover story in Earth Magazine. Print edition only.

From Black Hills Pioneer, Oct. 26, 2018: The new building will serve as housing for equipment that is currently located at the Ross complex, which will need to be moved in order to make room for the Long-Baseline Neutrino Experiment/Deep Underground Neutrino Experiment construction planned in the coming years.

Could misbehaving neutrinos explain why the universe exists?

From Live Science, Oct. 24, 2018: There are many huge unanswered questions in science, but it’s hard to beat “Why is there something, instead of nothing?” Fermilab scientist Don Lincoln explains how the study of neutrinos could answer it.

Neutrinos may help solve long-standing mysteries of the universe

ProtoDUNE proves out at CERN

From Black Hills Pioneer, Sept. 25, 2018: Two years in the making, a neutrino detector built at CERN for the Deep Underground Neutrino Experiment , which is being used as the prototype for the much larger Long-Baseline Neutrino Facility, detectors that will be housed at the Sanford Underground Research Facility in Lead, South Dakota, has recorded its first particle tracks.

The ultimate mystery of the universe

From CNN, Sept. 21, 2018: Fermilab scientist Don Lincoln explains the goals of Deep Underground Neutrino Experiment and how the ProtoDUNE detectors will validate the technology of the much larger DUNE.

Early tests pave the way for a giant neutrino detector

From Science News, Sept. 18, 2018: An enormous future particle detector is now within closer reach. The first data from a prototype experiment, ProtoDUNE, hint that scientists may have what it takes to build the planned neutrino detector.

This experiment will shoot ghostly particles through Earth, answer why we exist

From Live Science, Sept. 18, 2018: On the occasion of the ProtoDUNE detector seeing its first signals, Fermilab’s Don Lincoln lays out the research goals of the international Deep Underground Neutrino Experiment.

From Rapid City Journal, Sept. 14, 2018: DUNE is mentioned in this piece from South Dakota media on the federal appropriations bill. In this two-minute video, learn how scientists and engineers at universities and laboratories are working hand-in-hand with companies to design electronics, build hardware and develop computer programs for the Long-Baseline Neutrino Facility and the international Deep Underground Neutrino Experiment, hosted by Fermilab. How will PIP-II take Fermilab to the next level?

In this 12-minute video, Fermilab scientist Don Lincoln discusses the PIP-II project, a significant upgrade to Fermilab’s accelerator complex. With PIP-II, Fermilab enable the laboratory to continue to be a world leader in particle physics for decades to come. PIP-II: the new heart of Fermilab

This two-minute video features the PIP-II project, which is an essential upgrade of Fermilab’s particle accelerator complex. It is the first U.S. particle accelerator project with significant contributions from international partners. PIP-II’s high-intensity proton beams will provide a flexible platform for the long-term future of the Fermilab accelerator complex and the U.S. accelerator-based particle physics program. It enables the scientific program for the international, Fermilab-hosted Deep Underground Neutrino Experiment and Long-Baseline Neutrino Facility. 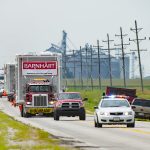 Physicists often find thrifty, ingenious ways to reuse equipment and resources. What do you do about an 800-ton magnet originally used to discover new particles? Send it off on a months-long journey via truck, train and ship halfway across the world to detect oscillating particles called neutrinos, of course. It’s all part of the vast recycling network of the physics community. 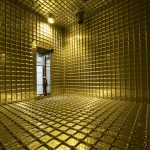 Success after a three-year sprint

For several weeks, a prototype detector for the Fermilab-hosted Deep Underground Neutrino Experiment collected data using beams from CERN’s particle accelerators. The results show a mature technology exceeding all expectations. It’s the culmination of three years of hard work by a global team dedicated to constructing and bringing the new detector online. What is the DUNE experiment?

Big discoveries need big detectors, and Fermilab’s DUNE experiment is one of the biggest. In this 10-minute video, Fermilab scientist Don Lincoln gives the lowdown on this fascinating project. Fermilab plans to shoot beams of neutrinos and antineutrinos through Earth’s crust from Chicago to western South Dakota. DUNE will study neutrino interactions in great detail, with special attention on (a) comparing the behaviors of neutrinos versus antineutrinos, (b) looking for proton decay, and (c) searching for the neutrinos emitted by supernovae. The experiment is being built and should start operations in the mid to late 2020s. 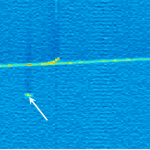 For the first time, scientists have demonstrated that low-energy neutrinos can be thoroughly identified with a liquid-argon particle detector. The results, obtained with the ArgoNeuT experiment, are promising for experiments that use liquid argon to catch neutrinos, including the upcoming Deep Underground Neutrino Experiment. 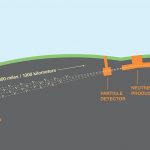 Fermilab has finalized an agreement with construction firm Kiewit-Alberici Joint Venture to start pre-excavation work for the Long-Baseline Neutrino Facility, which will house the enormous particle detectors for the Deep Underground Neutrino Experiment. The South Dakota portion of the facility will be built a mile beneath the surface at the Sanford Underground Research Facility in Lead, South Dakota. 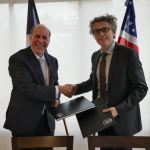 Agencies in the United States and France have signed statements expressing interest to work together on the development and production of technical components for PIP-II, a major particle accelerator project with substantial international contributions. In addition, the French agencies also plan to collaborate on DUNE, an international flagship science project that will unlock the mysteries of neutrinos. 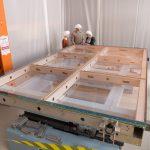 The upcoming Short-Baseline Near Detector at Fermilab continues scientists’ search for evidence of a hypothetical particle, the sterile neutrino. Collaborators around the world are participating in the detector’s construction. Its first critical components recently arrived from partner institutions. When complete, SBND will be the third and final detector in Fermilab’s Short-Baseline Neutrino Program. 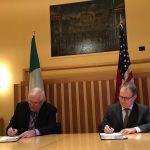 U.S. Department of Energy and Italy’s Ministry of Education, Universities and Research to collaborate on particle accelerator construction at Fermilab

The agreement launches a multinational collaboration to build a powerful new accelerator at DOE’s Fermilab complex. Italy and its National Institute of Nuclear Physics will provide major contributions to the construction of the 176-meter-long superconducting particle accelerator that is the centerpiece of the PIP-II project. 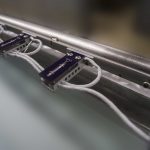 How to build a towering millikelvin thermometer

How do you calibrate a probe that is sealed inside a giant liquid-argon neutrino detector? 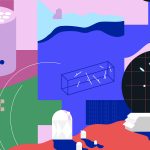 These international projects, selected during the process to plan the future of U.S. particle physics, are all set to come online within the next 10 years. In this 5-minute video, INFN Vice President Antonio Masiero discusses Italy’s long history of innovation in neutrino physics and their role and expertise. They will contribute to the Long-Baseline Neutrino Facility/Deep Underground Neutrino Experiment. 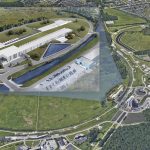 The U.S. Department of Energy invites citizens to review and comment on the possible environmental effects of building and operating the Proton Improvement Plan II (PIP-II) particle accelerator at Fermilab. 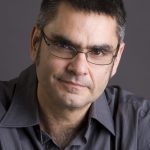 Even though the ProtoDUNE time projection chambers are small compared to the planned DUNE far detectors, the data volume that these detectors produce are similar in size to what is coming out of the largest LHC experiments. 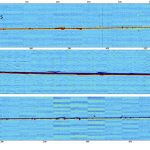 The largest liquid-argon neutrino detector in the world has just recorded its first particle tracks, signaling the start of a new chapter in the story of the international Deep Underground Neutrino Experiment.

From CERN Courier, March 8, 2019: Newly published results from the MINOS+ experiment at Fermilab cast fresh doubts on the existence of the sterile neutrino — a hypothetical fourth neutrino flavor that would constitute physics beyond the Standard Model. MINOS+ studies how muon neutrinos oscillate into other neutrino flavors as a function of distance travelled.

From University of Missouri – Kansas City’s University News, Feb. 6, 2019: Sánchez, a scientist at Iowa State University, is a part of Fermilab’s NOvA neutrino experiment and the Deep Underground Neutrino Experiment. She also co-leads the ANNIE experiment at Fermilab.

From CERN Courier, Oct. 29, 2018: The world’s largest liquid-argon neutrino detector has recorded its first particle tracks in tests at CERN, marking an important step towards the international Deep Underground Neutrino Experiment under preparation in the United States.

From the University of Houston, Oct. 11, 2018: ProtoDUNE, a prototype for what will be a much bigger detector at the international Deep Underground Neutrino Experiment, has been recording particle tracks, and physicists all over the world are collecting the data.

From University College London news, Oct. 5, 2018: International scientists are one step closer to answering the most fundamental question of our existence, ‘why are we here?’, as part of a global collaboration, DUNE, involving UCL researchers.

From William & Mary, Sept. 18, 2018: Scientists on the DUNE collaboration think that neutrinos may help answer one of the most pressing questions in physics: why we live in a universe dominated by matter. The project includes a substantial William & Mary contingent.

From University of Manchester, Sept. 18, 2018: The largest liquid-argon neutrino detector in the world has recorded its first particle tracks, signaling the start of a new chapter in the story of the international Deep Underground Neutrino Experiment. The university is playing a leading role in a £65million flagship global science project.

From CERN, Sept. 18, 2018: The technology of the first ProtoDUNE detector will be the same to be used for the first of the DUNE detector modules in the United States.

From Brookhaven, Sept. 18, 2018: The enormous ProtoDUNE detector – the size of a three-story house and the shape of a gigantic cube – was built at CERN as the first of two prototypes for what will be a much, much larger detector for the DUNE project, hosted by Fermilab.

From STFC, Sept. 18, 2018: The enormous ProtoDUNE detector is the largest liquid-argon neutrino detector in the world. The size of a three-story house and the shape of a gigantic cube it has just recorded its first particle tracks signaling the start of a new chapter in the story of the international Deep Underground Neutrino Experiment.