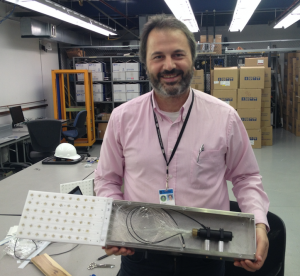 The Muon g-2 experiment’s collaborators have elected Graziano Venanzoni, a physicist at the Italian National Institute for Nuclear Physics, Pisa, to serve as their new co-spokesperson effective Sept. 1. Venanzoni succeeds University of Manchester’s Mark Lancaster, who has completed his two-year term as co-spokesperson of the experiment.

Venanzoni joined the Muon g-2 collaboration in 2009. He also participated in the KLOE experiment at the INFN Frascati National Laboratory in Italy from 1994 to 2012. That experiment was devoted to studying the decay of phi mesons.

“The Muon g-2 collaboration is very healthy and full of talented and enthusiastic people,” said Venanzoni, who has been managing the experiment’s Italian group. “The previous spokespeople as well as the current one, Chris Polly, have done an amazing job.”

Polly looks forward to working with Venanzoni in his new role.

“He is an exceptional physicist who has worked on Muon g-2 and related experiments for many years and also brings a very compassionate, empathetic element to the scientific leadership,” Polly said. “Having an Italian spokesperson highlights the international nature of the collaboration that has come together to make Muon g-2 at Fermilab a success.”

The Muon g-2 collaboration consists of more than 150 scientists drawn from the accelerator, nuclear and particle physics communities. The collaboration uses an intense beam of muons traveling at nearly the speed of light to precisely determine the particle’s magnetic moment, which is characterized by its g value. The muon acts like a spinning magnet. Its g value, which is slightly greater than 2, indicates the presence of the well-known quantum foam that surrounds all matter. By measuring the magnetic moment precisely, scientists can search for new particles that might be emerging from the foam.

Physicists at Brookhaven National Laboratory concluded an experiment nearly 20 years ago that found a small difference between the theoretical prediction and their measurement of the muon’s magnetic moment. If such a difference truly exists, physicists would know that new, unobserved particles or forces exist in the universe. The discovery remains unverified, however, pending the more precise measurements of the Fermilab Muon g-2 experiment.

“Who does not remember the announcement of the discovery of the Higgs boson at the CERN auditorium?” Venanzoni asked. “Something similar could happen to us, too! We have to do all that is possible to establish rigor in our results.”

Venanzoni said he will focus efforts to help ensure smooth and efficient data collection, bring the collaboration to its long-awaited first scientific publication, and work with Fermilab, the experiment’s lead investigators, and their funding agencies to ensure a long life for the experiment.

He noted that it will be important for him to listen to all of his colleagues, especially those in the early-career phase.

“I have always thought and still think that the main task of senior physicists is to train early-career colleagues,” Venanzoni said. “Doing it well requires a lot of work and dedication, but the gratification is enormous.”

Venanzoni is also committed to promoting equity, diversity and inclusion in the Muon g-2 collaboration.

“I will make sure that attention to underrepresented groups is high,” he said.

The Muon g-2 experiment is supported by the Department of Energy Office of Science.