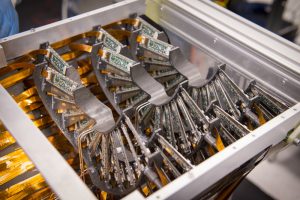 The Department of Energy has awarded U.S. CMS Upgrade project a Project Management Achievement Award for their work in enhancing the performance of the current CMS detector at CERN’s Large Hadron Collider. Photo: Reidar Hahn, Fermilab

The U.S. Department of Energy has recognized the LHC CMS Detector Upgrade Project, led by Fermilab, with a Project Management Achievement Award, one of three given this year.

The LHC CMS Detector Upgrade Project, the U.S. contribution to an international upgrade at CERN, was initiated to further enhance the performance of the current CMS detector at CERN’s Large Hadron Collider in Europe. This $32 million upgrade project will enable more detailed study of the Higgs boson and even rarer processes that will shed light on the unexplored corners of our understanding of how the universe works.

Each year DOE honors the project teams that distinguished themselves in terms of achievement during the preceding fiscal year. DOE commended the U.S. CMS Upgrade team for completing the project on budget and schedule and for delivering equipment that will enable new discoveries in science for years to come.

The upgrade project, completed in 2019, involved a series of strategic hardware upgrades to the CMS detector, significantly increasing its sensitivity to potential new physics signatures arising from collisions at the Large Hadron Collider in the near term.

“This recognition should be spread to the entire team of project specialists, administrators, students, postdocs, engineers, technicians, faculty and scientists at Fermilab and the 30 universities that contributed to this upgrade,” said Fermilab scientist Steve Nahn, U.S. CMS Upgrade project manager. “It was everyone’s hard work and diligence that made it possible to make the upgrade such a successful project, which will keep the physics output of CMS flowing for the next seven years.”

The U.S. CMS Upgrade team is now executing the High-Luminosity LHC CMS Detector Upgrade project, a more substantial revamping of the detector for an upcoming boost in luminosity at the LHC, expected in the late 2020s. The High-Luminosity LHC will produce 10 times the data that it does currently. After this subsequent upgrade is complete, the CMS detector will be ready to take on the data deluge.

The CMS experiment is supported by the Department of Energy Office of Science and the National Science Foundation.