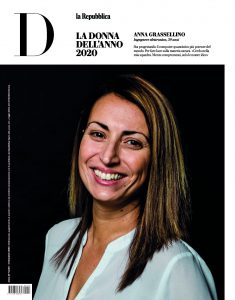 On Dec. 10, the Italian magazine D La Repubblica named Anna Grassellino, scientist at the U.S. Department of Energy’s Fermi National Accelerator Laboratory, as “Woman of the Year.” Grassellino was selected from a list of 50 excellent Italian women in different fields who left an impression on 2020. She is the director of the new Superconducting Quantum Materials and Systems Center based at Fermilab. The SQMS Center has the ambitious goal of building and deploying a beyond-state-of-the-art quantum computer over the next five years as part of an international collaborative effort involving 20 partner institutions including the Italian National Institute of Nuclear Physics (INFN).

“I’m so honored to be named Woman of the Year 2020 by D La Repubblica,” Grassellino said. “2020 is the year that has brought more awareness in the world of the crucial importance of science as a beacon of hope for the future of our society. I hope to be a true testimonial of the importance of investing in science and innovation and to be of inspiration for all the young girls and women who aspire to have a career in STEM. My message to them is ‘yes you can,’ and that science is driven by creativity and thrives on diversity.”

Grassellino is from Marsala, Italy, and studied electronic engineering at the University of Pisa. She received her doctorate from the University of Pennsylvania before joining Fermilab in 2012. Her specialty is superconducting radio-frequency technology, known as SRF, the heart of modern particle accelerators. She has received several awards for the discovery of nitrogen doping, a technique that dramatically increases the efficiency of SRF cavities.

Superconducting technology is also a unique feature of the SQMS Center, one of five DOE quantum centers established earlier this year in the United States. One of the core questions SQMS research will tackle is how to extend the lifetime of qubits, the building blocks of quantum computers. The SRF cavities originally developed for particle accelerators have already successfully expanded into the quantum computing realm, showing success in extending qubit lifetimes.

In addition, the SQMS Center will develop new quantum sensors, which could lead to the discovery of the nature of dark matter and other elusive subatomic particles. Progress in quantum computing could lead to revolutions in particle physics and in other fields as well, including biology, medicine, energy, finance and national security.

“Anna Grassellino is a brilliant and tireless researcher who has had an impact on particle accelerator technology beyond anything imagined a few years ago,” said Fermilab Director Nigel Lockyer. “She has now turned her talents and focus to leading a national DOE quantum information science center collaborating with leading Italian researchers, along with numerous key academic and industry contributors. Fermilab is very proud of her accomplishments and leadership.”

While the SQMS Center is hosted at Fermilab, it brings together world-class experts from partners including Northwestern University, Ames Laboratory, the National Institute of Standards and Technology, Rigetti Computing and INFN, which has collaborated with Fermilab for more than 40 years.

Quantum information science and particle accelerator research is supported by the Office of Science of the U.S. Department of Energy.

Learn more about the partnerships and goals of the Superconducting Quantum Materials and Systems Center.

The Office of Science is the single largest supporter of basic research in the physical sciences in the United States and is working to address some of the most pressing challenges of our time. For more information, please visit energy.gov/science.