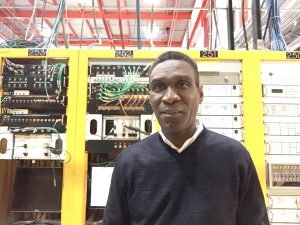 I’m coming up on 26 years in March. I’ve been with the Department of Energy national labs for a little over 32 years overall. I did my graduate work at Brookhaven National Lab on the Relativistic Heavy Ion Collider, then I came to Fermilab. I worked in operations here for a little bit, then I worked on electron cooling and FAST/IOTA, and now I’m working on the PIP-II accelerator project.

What do you do for PIP-II?

I’m responsible for machine protection systems to make sure that the accelerator won’t have excessive beam loss or issues that will cause damage to the very expensive cryogenic systems. The protection system is critical in order to operate the test bed for PIP-II, called PIP2IT.

What’s the most rewarding part of your job?

When things work! Systems don’t often work the way you expect them to work the first time, so when you put a lot of effort in, and it works and you actually deliver, that’s a really good feeling. It’s really rewarding to look back and see where you started, all the difficulties you had and how you solved them.

How did you get involved in accelerator physics?

I got involved through the summer programs as an undergraduate. I was a summer student at Brookhaven in New York and at SLAC National Accelerator Laboratory in California. It really opened me up to the idea of doing accelerator physics — which eventually led me here to Fermilab.

Is that why you’re part of the Summer Internships in Science and Technology committee?

Yes. I’ve been part of the committee for 20 years off and on, but I’ve been involved with training and mentoring students since I started at Fermilab. The program is very competitive, and as its current chair, I’m pushing to make it as inclusive as I can.

I think there’s a big need for inclusiveness at the laboratory. To work in engineering and science can be intimidating, especially for students from underrepresented groups, so I want to make the students feel comfortable and help them understand that they have a contribution to make. I think it’s very important to reach students who wouldn’t have as much opportunity at their smaller institutions or who haven’t had access to research, to give them an opportunity to come to the lab and work with our scientists and engineers and get introduced to what we do at Fermilab.

What do you do when you’re not working on accelerators?

A trip to Malawi several years ago with my wife really piqued my interest in environmental technology. I got involved in a project there building small wind turbines that can be easily serviced and set up in a rural village setting where they can deliver power for students to learn to read at night.

What do you do for fun?

I love music — jazz, reggae, everything. I like to party and cook, and I love to read. I’ve got a huge library of books on almost every topic. I really love reading about history, especially Black history. I find there’s so much not known about it.

I studied the 1619 project – 1619 is when the first enslaved Africans arrived in America — which really puts a lot into perspective. In high school, back in Barbados, we had a very different approach to history. I was exposed to history from the point of view of Africans. I learned a lot about the history of the Americas and the influence that the Caribbean had on developing America. If you go to the Carolinas, a lot of the places there are named after parishes in Barbados because the English took a number of Barbadians there to develop the beet sugar industry. I also study a lot about African American scientists and entrepreneurs. I’m amazed at what people did under very, very tough circumstances over many years.

Accelerator research at Fermilab is supported the DOE Office of Science.