Scientists at the Department of Energy’s Fermi National Accelerator Laboratory and the University of Chicago have demonstrated a new technique based on quantum technology that will advance the search for dark matter, the invisible stuff that accounts for 85% of all matter in the universe.

The collaboration has developed superconducting versions of devices called qubits that will be able to detect the weak signals emitted by two kinds of hypothetical subatomic particles that could reside in an invisible but ubiquitous part of the universe called the dark sector. One is called an axion, a leading dark matter candidate. The other is called a hidden photon, a particle that possibly interacts with the photons — particles of light — of the visible universe. 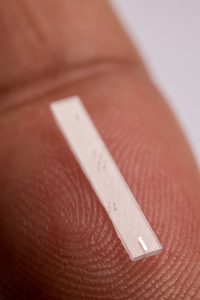 A qubit (the small rectangle) is set onto a sapphire substrate, which sits upon a fingertip to show scale. Fermilab and University of Chicago scientists used a qubit similar to this one to develop a technique that will speed up the search for axion dark matter and hidden photons. Photo: Reidar Hahn, Fermilab

The technique now demonstrated by the Fermilab-University of Chicago team is 36 times more sensitive to the particles than the quantum limit, a benchmark of conventional quantum measurements, enabling searches for dark matter to proceed 1,000 times faster.

In the technique, the qubits are designed to detect the photons that would be produced when dark matter particles interact with an electromagnetic field. The benefit of using qubits as detectors instead of the conventional technology lies in the way they interact with photons.

The key to the technique’s sensitivity is its ability to eliminate false-positive readings. Conventional techniques destroy the photons they measure. But the new technique can probe the photon without destroying it. Making repeated measurements of the same photon, over the course of its 500-microsecond lifetime, provides insurance against erroneous readings.

“To make a measurement of the photon once with the qubit takes about 10 microseconds, so we can make about 50 repeated measurements of the same photon within its lifetime,” said Akash Dixit, a doctoral student in physics at the University of Chicago.

Dixit and his co-authors, including Fermilab’s Aaron Chou, describe their technique in Physical Review Letters.

“Experiments using conventional techniques were just nowhere near what they needed to be for us to be able to detect higher-mass axion dark matter,” Chou said. “The noise level is way too high.”

There are two ways to make an experiment more sensitive to the subtle hints of new physics that the scientists are looking for. One is to boost the signal by making larger detectors. Another to reduce the noise levels that hide the target signals. The Fermilab-University of Chicago team did the latter.

“It’s a much more clever and cheaper way to get the same large improvements in sensitivity,” Chou said. “Now, the level of the static noise has been reduced by so much that you have a chance to actually see the very first small wiggles in your measurements due to the very, very tiny signal.”

The technique will benefit the search for any dark matter candidate because, when invisible particles convert into photons, they can be detected.

Dixit and his colleagues adapted their technique from one developed by atomic physicist Serge Haroche, who shared the 2012 Nobel Prize in physics for his feat. Chou views the new technique as part of the progression that started with the development of nondemolition interaction in atomic physics and is now imported to the field of superconducting qubits.

Ferreting out axions and hidden photons

Physicists have made little progress in detecting axions since their existence was proposed more than 30 years ago.

“We know that there’s a huge amount of mass all around us that isn’t made of the same stuff you and I are made of,” Chou said. “The nature of dark matter is a really compelling mystery that a lot of us are trying to solve.”

Superconducting microwave cavities are vital to the new technique. The cavity used in the experiment is made of highly pure — 99.9999% — aluminum. At extremely low temperatures, the aluminum becomes superconducting, a property that extends the longevity of qubits, which by their nature are short-lived. The superconducting cavity provides a way to accumulate and store the signal photon. The qubit, an antenna inserted into the cavity, then measures the photon. 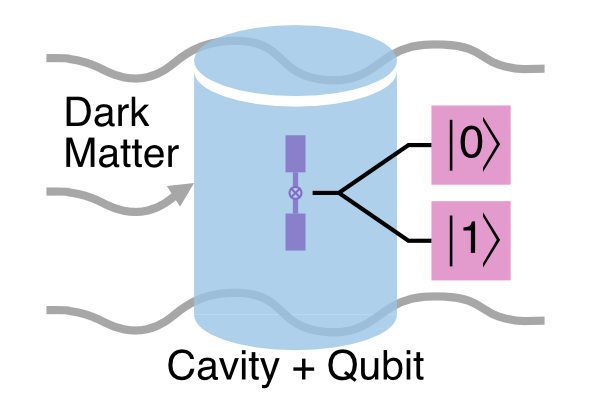 The blue cylinder in this diagram represents a superconducting microwave cavity used to accumulate a dark matter signal. The purple is the qubit used to measure the state of the cavity, either 0 or 1. The value refers to the number of photons counted. If the dark matter has successfully deposited a photon in the cavity, the output would measure 1. No deposition of a photon would measure 0. Image: Akash Dixit, University of Chicago

“The benefit we get is that, once you — or dark matter — puts a photon in the cavity, it’s able to hold the photon for a long time,” Dixit observed. “The longer the cavity holds the photon, the longer we have to make a measurement.”

The same technique can find hidden photons and axions; the latter will require a high magnetic field to detect.

If axions exist, the current experiment provides a one-in-10,000 chance that it would detect a photon produced by a dark matter interaction.

“To further improve our ability to sense such a rare event, the temperature of the photons needs to be lowered,” said David Schuster, University of Chicago associate professor of physics and a co-author of the new paper. Lowering the photon temperature will further increase sensitivity to all dark matter candidates, including hidden photons.

The photons in the experiment have been cooled to a temperature of approximately 40 millikelvins (minus 459.60 degrees Fahrenheit), just a touch above absolute zero. The researchers would like to go as low as the operating temperature of 8 millikelvins (minus 459.66 degrees Fahrenheit). At this point, the environment for searching for dark matter would be spotless, effectively free of background photons.

“While there’s definitely still a ways to go, there’s reason to be optimistic,” said Schuster, whose research group will apply the same technology to quantum computing. “We’re using quantum information science to help the dark matter search, but the same kind of background photons are also a potential error source for quantum computations. So this research has uses beyond fundamental science.”

Schuster said the project provides a nice example of the type of collaboration that makes sense to do between a university lab and a national lab.

“Our university lab had the qubit technology, but in the long term by ourselves, we were not really able to do any kind of dark matter search at the level needed. That’s where the national-lab partnership plays an important role,” he said.

The payoff from this cross-disciplinary effort could be huge.

“There’s just no way to do these experiments without the new techniques that we developed,” Chou said.

Funding for the experiment comes from the Heising-Simons Foundation and the DOE Office of Science through the High Energy Physics QuantISED program.