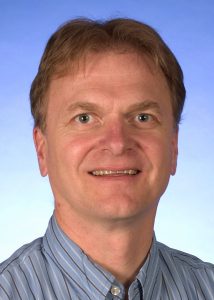 The Cryogenic Engineering Conference has awarded Jay Theilacker the 2021 Samuel C. Collins Award. Theilacker is the Cryogenic Sector head in the Applied Physics and Superconducting Technology Division at Fermilab. The award honors Theilacker’s technical problem-solving and his “dedicated and unselfish” leadership and service within the cryogenic community over the last 40-plus years.

Theilacker joined Fermilab as an engineer in 1980, working on a cryogenic system for the Tevatron. When it started, the Tevatron’s cryogenic system was seven times larger than any other in existence, and its liquefaction capability increased the world’s capacity for producing liquid helium by over 50%, according to the American Society of Mechanical Engineers. Theilacker made significant technical contributions to the design, construction, commissioning and operation of the Tevatron’s satellite refrigerators and its cryogenic distribution system. In 1993, ASME designated the Tevatron’s cryogenic cooling system an International Historic Mechanical Engineering Landmark because of its technical achievement.

Later, as Cryogenic Department head, Theilacker led upgrades to the Tevatron that further cooled the accelerator magnets to allow it to operate at higher energy, enabling advances in high-energy physics.

Now, he’s implementing a 10-year plan for helium cryogenics at the lab.

CEC previously awarded Theilacker its best research paper award in 1987 and its exemplary contribution award in 2005.

Apart from his engineering expertise, the CEC considered Theilacker’s leadership at Fermilab. He has mentored early-career cryogenic engineers, regularly encouraged colleagues to publish and grow in the cryogenic community. From 1993 to 2019, he also served as a board member for the CEC.