The Fermi Research Alliance, a partnership of the University of Chicago and Universities Research Association that manages the Fermi National Accelerator Laboratory on behalf of the U.S. Department of Energy, announced Sept. 10 that Nigel Lockyer will step down after eight years as director of the national laboratory that leads U.S. research in particle physics. 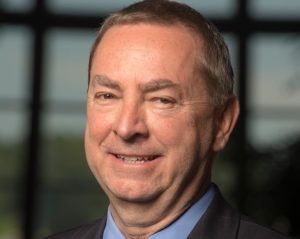 During Lockyer’s tenure, Fermilab has continued to make groundbreaking advances in particle physics. The laboratory has maintained leading roles in international physics projects, including building components and analyzing data for the Large Hadron Collider at CERN, and has laid the foundation for the flagship Deep Underground Neutrino Experiment, a massive international research project headquartered at Fermilab that will study neutrinos in order to better understand the origins of the universe.

Lockyer is expected to serve as Fermilab director until spring of 2022, while a committee appointed by the Fermi Research Alliance conducts an international search for his successor.

“Chancellor Zimmer and I are grateful to Nigel for his years of dedicated service at Fermilab, under which the lab set a course for global leadership in accelerator-based neutrino research,” said University of Chicago President Paul Alivisatos, who serves as chair of the board of directors of Fermi Research Alliance LLC. “Under his leadership of the extraordinary Fermilab team, the lab has made significant advances in critical areas of particle physics and quantum science. Fermilab has an extremely bright future of discovery ahead, and is poised to continue seeding innovative projects such as DUNE in a new era of scientific research and exploration.”

In 2013, Lockyer became the sixth director of Fermilab, which is designated as the premier laboratory for particle physics and accelerator research in the U.S. Under Lockyer’s leadership, Fermilab realigned its mission with the recommendations of the Particle Physics Project Prioritization Panel report and has set a course for world leadership in accelerator-based neutrino research through the construction of the Long-Baseline Neutrino Facility (LBNF), Deep Underground Neutrino Experiment (DUNE) and Proton Improvement Plan (PIP-II), which are supported by large international collaborations.

LBNF will send trillions of neutrino particles 800 miles (1,300 km) through the earth to a four-story-high detector a mile beneath the surface inside a former mine in Lead, South Dakota. Now under construction, DUNE will be the most advanced experiment in the world studying invisible particles called neutrinos, which may hold the key to cosmic mysteries that have baffled scientists for decades. The massive project will bring together more than 1,000 scientists from over 200 institutions and 31 countries. Lockyer played a key role in defining the scientific vision for the laboratory’s future, and in securing major commitments to its realization from international partners.

As part of that mission, Fermilab plans to produce the most powerful, high intensity neutrino beams in the world by upgrading its accelerator complex. The PIP-II accelerator will work as a new first stage for Fermilab’s chain of accelerators, powering both DUNE and its extensive suite of on-site particle physics experiments. When complete, the new machine will become the heart of the laboratory’s accelerator complex, vastly improving what is already the world’s most powerful particle beam for neutrino experiments.

“The global high-energy physics community and the Department of Energy have been the grateful recipients of Nigel Lockyer’s vision for the field and commitment to international collaboration and cooperation in physics for almost 40 years,” said Steve Binkley, acting director of the DOE’s Office of Science. “His embrace of, and advocacy for, the strategic plan for U.S. Particle Physics in a Global Context (popularly known as the P5 report) has enabled the entire community to forge the path that is successfully executing that blueprint for the entire field. The warm relationships he has established and cultivated with our international collaborators in Europe and Asia are a model of science diplomacy from which researchers and governments alike benefit, and will stand as one of Nigel’s enduring legacies.”

As Fermilab director, Lockyer also led efforts to revitalize the laboratory’s infrastructure, accelerated the laboratory’s efforts to translate scientific discoveries to applications for society, and kicked off new initiatives such as Fermilab’s participation in the Chicago Quantum Exchange.

“The past several years have been a period of extraordinary accomplishment at Fermilab. Not only has the lab pushed the boundaries of knowledge with transformational discoveries and technological developments, but it has also seen the launching of new, field-defining international experiments that will forever alter our understanding of the universe,” Lockyer wrote in a message announcing his decision to step down. “It has been my privilege to serve as director of Fermilab.”

Before joining Fermilab, Lockyer served as a physics faculty member at the University of Pennsylvania, focusing on high-energy particle experiments at the energy frontier, followed by six years at the helm of TRIUMF, Canada’s national laboratory for nuclear and particle physics.