Editor’s note: This article was originally published by the University of Chicago.

In 2007, a new leadership training initiative for scientists at Argonne National Laboratory and Fermi National Accelerator Laboratory launched as a small pilot project. This fall, the training initiative kicked off its latest cohort as a highly sought-after program that includes participants from U.S. Department of Energy laboratories across the country.

The Strategic Laboratory Leadership Program is a non-degree Chicago Booth Executive Education program for high-potential lab scientists and staff to learn leadership skills from world-class professors, network with their peers, and prepare for more senior leadership roles. The program returned in September with a new hybrid format: 12 virtual sessions taught by University of Chicago Booth School of Business professors and a two-day, in-person capstone program.

Over the years, the program has been so successful that it has expanded in size, offering two sessions to cohorts from six additional national laboratories. Since its inception, the program has trained more than 300 national lab professionals in the areas of strategy, change management, and innovation. Many past participants of the program have been promoted within their labs or have gone onto senior roles at other labs.

“The Strategic Laboratory Leadership Program has become the gold standard for lab leadership development programs,” said Juan de Pablo, vice president for national laboratories, science strategy, innovation and global initiatives at UChicago. “As part of the University of Chicago’s Joint Task Force Initiative, it has been key to supporting success at Argonne and Fermilab. We have continually worked to ensure that these sessions help develop leaders who will take our national labs into the future, and labs across the country are beginning to notice just how successful this program has been.”

Key to the program’s success is Harry Davis, the Roger L. and Rachel M. Goetz Distinguished Service Professor of Creative Management at Booth, who helped develop the program back in 2006. At the time, he was participating in a committee at Argonne tasked with investigating some of the cultural issues that were impacting safety. That work led to a proposal for a leadership program involving both Argonne and Fermilab.

When he spoke with staff at Argonne, he found that up-and-coming leaders wanted more training in cross-disciplinary collaboration and innovative and strategic thinking. Davis and others at the labs and Booth developed a curriculum to not only teach leadership skills but also to give Argonne and Fermilab lab members a chance to work together on a real assignment given by a senior leader involving a strategic challenge, then present their findings to UChicago and lab leadership.

“We wanted to expose senior scientists and support staff to relevant concepts in leadership and strategy, but also provide an opportunity to apply these in a cross-functional team with members from both labs,” Davis said. “There was a great intellectual curiosity, and everyone realized that we must continue to do this, given the challenges that labs face.”

Mark Peters was a member of that first cohort. At the time, he was a deputy associate lab director at Argonne. After the program, he went on to lead Idaho National Laboratory and is now executive vice president of laboratory operations at Battelle, a non-profit applied science and technology development company. He counts Davis as a lifelong mentor.

“I learned how to build a strategy, how to bring along a team, how your leadership role sometimes requires you to play different roles, depending on the situation,” Peters said. “But mostly, I remember how Harry taught us to lead with the heart. That is something I take with me everywhere I go.”

Sandra Charles, now chief equity, diversity, and inclusion officer at Fermilab, participated in the program in 2019. 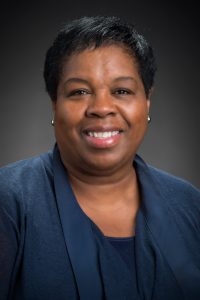 Sandra Charles participated in the Strategic Laboratory Leadership Program in 2019.

“The SLLP helped to refine my skills in managing people and projects,” she said. “The program challenged me to think deeply about strategic planning and managing change, informed by the perspectives of peers from Fermilab and other national laboratories. In the years since I participated in the program, the lessons I learned from SLLP both through theory and introspection have helped to shape my approach to leadership in my role at Fermilab.”

Participants have also become a go-to resource for the national labs as they come together to solve difficult problems. When former Fermilab Chief Operating Officer Kate Gregory and her colleagues began to think about centralizing facilities management in 2020, they knew that such a large and complex project would require the right kind of communication and implementation.

So they turned to past participants of the Strategic Laboratory Leadership Program. Fermilab scientists and staff who had participated in the program had worked on a project involving change management, and senior leadership were eager to share their knowledge.

“They were able to coach our senior leaders through the process,” Gregory said. “It made this big change much less risky and much more successful.”

When Mike Edelen began SLLP in 2019, he was already rising through the ranks at Argonne. A former Navy submarine officer, he was used to regimented military life, and initially had trouble adjusting to the new rhythm and hierarchies of the lab. When he learned about Davis’s approach to leadership — bringing different “characters” to different situations, depending on what was needed — he realized that he already practiced that in his role as interim division director for environmental safety and health.

“Now I’m able to internalize which style is the best approach for a situation,” said Edelen, who is now a division director. “It helps me to better prepare for difficult conversations. The program also taught me to do self-reflections — what worked, what didn’t — which I still do on a regular basis.”

That, says Argonne Chief Operating Officer Kim Sawyer, is one of the great benefits of the program.

“I always say that we don’t take the time to learn about ourselves,” she said. “We are great at studying scientific systems, but this program allows individuals to learn about how situations impact them and how they can approach situations differently. It has become a rite of passage.”

Each year, Argonne receives so many nominations for the program that they must prioritize enrollment. “There is a huge appetite to develop leaders within national labs,” said Paul Kearns, director of Argonne. “Many of our senior leaders here at Argonne have gone through the program, and we consider it an essential part of building and maintaining our world-class community of talent.”

For Yun He at Fermilab, the program offered a chance to think about the lab beyond her role as a project manager. Yun He learned to view projects differently as a result of participating in the SLLP.

“I was more technically oriented, focused on my own work in my own silo,” she said. “But through the program, I learned a different mindset. Now I look at areas to make improvements, make impact, and develop a community that will allow our members to get connected and have a better sense of belonging.”

Now a group leader, she even brings that mindset outside of her job. As co-leader of the Asian-Pacific Association Laboratory Resource Group at Fermilab, she took the initiative to promote cross-cultural communication and resources within the group and allies after the COVID-19 pandemic led to a rise in anti-Asian sentiment.

“It was a wake-up call for me to step out of my comfort zone, seize the opportunity, and to be a courageous leader,” she said.

This year, the cohort will follow three learning tracks — a classroom track with online and in-person sessions; a strategic discovery experiment track that places participants in teams to work on a broad strategic project that looks at the future of work in laboratories; and a personal development track that teaches personal leadership with feedback from professional coaches. New sessions include lessons on artificial intelligence and communicating effectively.

Now that the program has expanded to labs across the country, participants will get the benefit of a nationwide network with whom they can work to solve problems and benchmark solutions. Because of demand, the program has also added a second cohort that will begin in January.

“Participants not only learn about leadership — they find a network that re-energizes them, that gives them a way to continue learning throughout their whole lives,” Davis said.

The Strategic Laboratory Leadership Program is supported by the University of Chicago Joint Task Force Initiative, a program dedicated to helping Argonne and Fermilab achieve mission success by opening channels of frequent communication and collaboration across institutions.