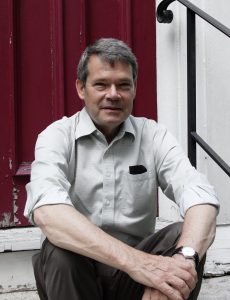 The American Astronomical Society has named Dark Energy Survey director Rich Kron a 2022 AAS Fellow. He is recognized for “pioneering photometric studies of high-redshift galaxies, and for service to the astronomy community through his dedicated career of leadership of optical surveys.”

The AAS Fellowship was established to recognize members for their contributions toward the AAS mission of enhancing and sharing humanity’s scientific understanding of the universe, including original research, astronomical techniques or instrumentation, education and public outreach and service to astronomy and to the AAS.

From 2011-2015, Kron chaired the scientific advisory committee for the Giant Magellan Telescope. He served as deputy director for the Fermilab-hosted Dark Energy Survey before stepping into the role of director in 2018.

The Dark Energy Survey is an international, collaborative effort to better understand dark energy, a phenomenon related to the increasingly rapid expansion of the universe. It has mapped more than 700 million astronomical objects and created one of the most accurate dark matter maps of the universe. Kron led the collaboration through the final season of data-taking and into the analysis stage that will produce final science results.

Kron recently retired from a joint appointment as scientist at Fermilab and professor at the University of Chicago. He continues to teach, conduct research and lead the Dark Energy Survey. He also serves on the executive committee for the Dark Energy Spectroscopic Instrument, which saw first light in 2019.