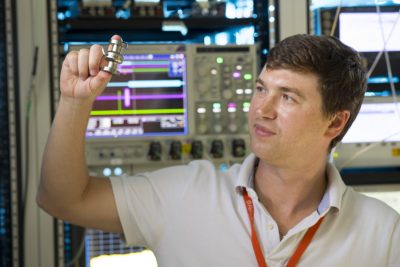 Viable quantum computing technology relies on the development of qubits that can maintain quantum information for periods of time longer than 1 second. At Fermilab, researchers are turning to existing particle accelerator technology to achieve this goal. Scientist Alexander Romanenko in the quantum lab at Fermilab. Photo: Reidar Hahn, Fermilab

Alexander Romanenko of the U.S. Department of Energy Fermi National Accelerator Laboratory is the recipient of one of the two 2022 Particle Accelerator Science and Technology Awards of the Institute of Electrical and Electronics Engineers Nuclear and Plasma Sciences Society.

The IEEE PAST Award recognizes individuals who have made outstanding contributions to the development of particle accelerator science and technology. Romanenko was cited “for outstanding contributions to science and technology of radio frequency superconductivity for particle accelerators.” The other award was given to Jean Delayen of Old Dominion University.

Romanenko currently is the chief technology officer for Fermilab, providing leadership in planning, directing and overseeing the research and development activities of superconducting radio frequency and magnet technology for both accelerators and non-accelerator applications at the lab, as well as cryogenic technology development for accelerators and detectors. He also serves as a technology thrust leader at the Fermilab-hosted Superconducting Quantum Materials and Systems Center, focusing on quantum regime behavior and quantum information sciences applications of SRF cavities.

Romanenko was cited “for outstanding contributions to science and technology of radio frequency superconductivity for particle accelerators.”

A senior scientist at Fermilab, Romanenko holds a doctorate in physics from Cornell University. He joined the lab in 2009 as a Peoples Fellow. A fellow of the American Physical Society, Romanenko has been recognized with several professional awards, including the 2017 USPAS prize for achievement in accelerator physics and technology, 2011 DOE Early Career Award and 2011 IEEE PAST Doctoral dissertation award. He is also an adjunct faculty at the Department of Physics and Astronomy at Northwestern University,

The 2022 PAST Awards will be presented at the 2022 North American Particle Accelerator Conference, to be held Aug. 7-12, 2022, in Albuquerque, New Mexico.

The PAST Award is sponsored by the Particle Accelerator Science and Technology Technical Committee of the IEEE Nuclear and Plasma Sciences Society. Details on the award as well as previous recipients can be found on the society’s website.