Merminga will be the seventh director of Fermilab, a 6,800-acre facility headquartered in Batavia, Ill., which is the United States’ premier particle physics and accelerator laboratory. Fermilab’s mission is to shed new light on our understanding of the universe, from the smallest building blocks of matter to the deepest secrets of dark matter and dark energy. 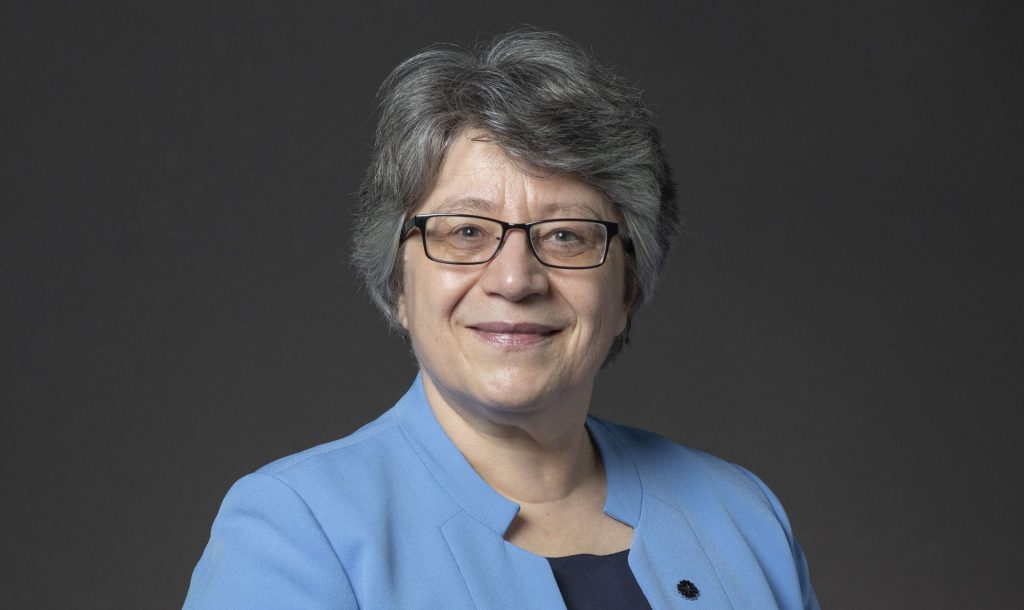 Lia Merminga has been named director of Fermi National Accelerator Laboratory, the nation’s premier particle physics and accelerator laboratory, effective April 18. Merminga will be the lab’s seventh director and the first woman to hold the position at Fermilab. Photo: Lynn Johnson, Fermilab

University of Chicago President Paul Alivisatos made the announcement April 5 in his capacity as chair of the board of directors of Fermi Research Alliance, LLC, which operates the laboratory for the U.S. Department of Energy.

Merminga will succeed Nigel Lockyer, who announced in September that he would step down as lab director after an eight-year tenure. She is the first woman to serve as director of Fermilab.

“Lia brings to this critical role an exceptional track record of success, passion for science, proven ability to execute major projects, focus on the talent and diversity of the Fermilab community, and strong commitment to the national and global high-energy physics communities,” Alivisatos said. “We are grateful to Nigel for his leadership of Fermilab and long legacy of building and strengthening international collaboration essential for advancing scientific discovery at a global scale. I look forward to working with Lia as she leads America’s particle physics and accelerator laboratory into a new era of exploring fundamental questions of matter, energy, space and time for the benefit of all.”

Merminga first came to Fermilab in 1987 as a student in the newly established graduate program in accelerator physics, and completed her Ph.D. thesis on the Tevatron, commissioned at the time as a collider. She was the second student to graduate from the program.

“Fermilab has given me a very rewarding career. I love the institution and am excited for the opportunity to give back to the lab.” Merminga said. “Following the 2014 Particle Physics Project Prioritization Panel (P5) vision, Fermilab, along with its national and international partners, undertook a truly ambitious array of construction projects, that once complete, will secure US leadership in the global particle physics program for decades to come. Flagship among them is LBNF/DUNE, the first internationally conceived, constructed and operated mega-science experiment on U.S. soil. My goal as Fermilab director is to successfully complete this profound and compelling vision while continuing to deliver groundbreaking science and technology innovation, enable the new P5 strategy, and realize the lab’s full potential in workforce development and diversity, lab operations, and in regional, national, and international partnerships.”

Merminga currently serves as director for the Proton Improvement Plan II or PIP-II project at Fermilab, an essential enhancement to Fermilab’s accelerator complex, which will enable the world’s most intense high-energy neutrino beam to the flagship Long-Baseline Neutrino Facility and the Deep Underground Neutrino Experiment and drive a broad physics research program.

A home for neutrino physics

Merminga will lead the lab as it transitions to become the world’s leading facility for the study of neutrinos. Neutrinos are virtually invisible particles that zip through most matter without a trace, but they are thought to hold key secrets to the fundamental makeup of the universe, as well as clues to the galaxy around us.

The laboratory’s current flagship program is the international Long Baseline Neutrino Facility and Deep Underground Neutrino Experiment. DUNE scientists will use neutrinos to answer some of the most profound questions about our universe. LBNF, located at Fermilab and at the Sanford Underground Research Facility in Lead, South Dakota, will produce the world’s most intense neutrino beam which will be aimed at massive underground detectors 800 miles away. The DUNE experiment is bringing together more than 1,400 scientists in more than 35 countries contributing expertise and building components of the experiment. The PIP-II accelerator at Fermilab will power the neutrino beam. 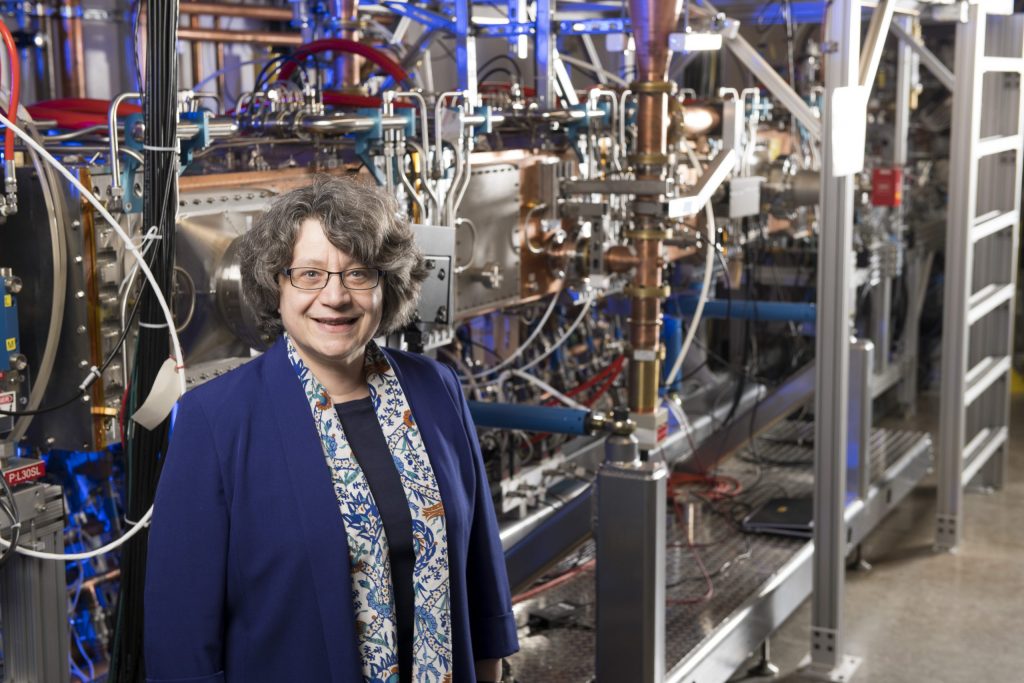 Prior to her appointment as Fermilab director, Lia Merminga served as the project director for the lab’s new particle accelerator called PIP-II. From 2018 to 2022, she oversaw the design and construction of this major DOE Office of High Energy Physics project, including the successful completion of a test accelerator (shown here) based on PIP-II technology. PIP-II is the first U.S. particle accelerator to be built with significant contributions from international partners, and positions Fermilab to be the world leader in accelerator-based neutrino research. Photo: Reidar Hahn, Fermilab

“Lia Merminga is an outstanding accelerator physicist. She has successfully led the PIP-II project, an international endeavor aiming at delivering the world’s most intense neutrino beam,” said Fabiola Gianotti, Director-General of CERN and member of the search committee. “Fermilab and CERN have built a very close partnership over the past decades. I look forward to working with Lia in the coming years in support of current and future projects in high-energy physics, continuing the very fruitful collaboration I had with the outgoing director, Nigel Lockyer.”

Fermilab continues to be heavily involved in research at the Large Hadron Collider at CERN and serves as the U.S. headquarters for the CMS experiment at the LHC, as well pursuing cutting-edge research in dark matter and dark energy. The laboratory is leveraging its expertise in accelerator and sensor technology to advance quantum information science through centers and collaborations such as the Superconducting Quantum Materials and Systems Center, one of five national quantum science centers.

“Lia will bring not only her scientific and leadership expertise to Fermilab, but also her ability to promote understanding and support of physics to broader audiences,” said Walter Massey, chair of the search committee.

Throughout her career, Merminga has been deeply committed to building a strong regional and national scientific ecosystem through outreach and deeper collaboration with leading research universities, community colleges, and K-12 educational institutions, as well as with leading industrial partners. The first woman to lead Fermilab, she has garnered recognition for her focus on talent development and diversity, equity, and inclusion. Merminga has held major scientific leadership roles, most recently at Fermilab and previously at SLAC National Accelerator Laboratory in California; TRIUMF in Vancouver, Canada; and the Thomas Jefferson National Accelerator Facility in Virginia. Merminga’s appointment follows a search by a committee of international scientific leaders.

“Lia impressed the search committee with her exceptional qualifications and passion for the science and people of Fermilab,” said David Gross, member of the search committee and former president of the American Physical Society.“We look forward to her tenure as she leads the laboratory into its future as the international home of high-energy physics.”

“Lia has been instrumental in developing strong scientific collaborations with research institutions across America and throughout the world in her past leadership positions, and we look forward to a continued partnership as she assumes the role of laboratory director,” said Eric Barron, chair of the Universities Research Association board of trustees.