It will come as no surprise that those who work at the U.S. Department of Energy’s Fermi National Accelerator Laboratory take pride in their science. But this June, for the first time, Fermilab took its science to Pride.

Led by Spectrum, the lab resource group centered on the LGBTQ+ community, Fermilab made its first appearance in both the Aurora, Illinois, and Chicago Pride Parades. The goal was twofold: Empower Fermilab’s LGBTQ+ community by showing official support for Pride celebrations, and make sure people in the wider LGBTQ+ community know that STEM careers are an option for them. 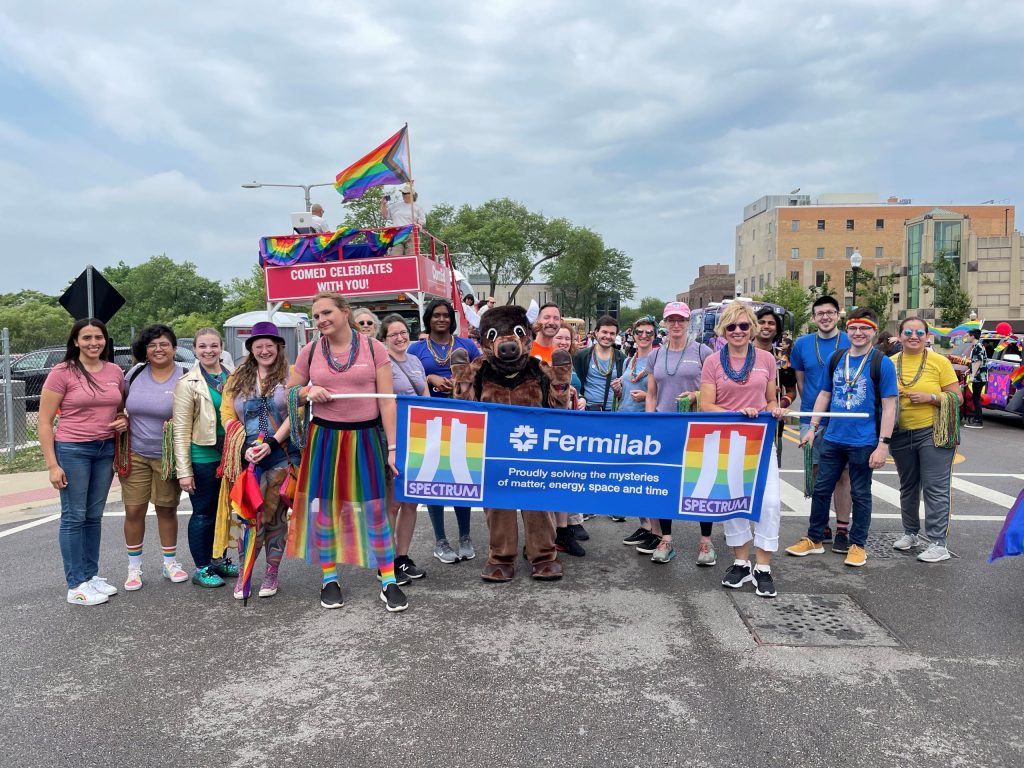 “We had posters that said, ‘Ho ho, hey hey, queers do science every day,’” said Jean Reising, a web applications developer who led Spectrum’s participation in the parades. “People in Chicago started to chant it even before we did. I felt so much pride to be a member of the community and have Fermilab there to say to the world, ‘We are really supportive of this community.’”

Marchers carried armfuls of beads and a banner bearing Fermilab’s logo and a twist on the lab’s mission statement: “Proudly solving the mysteries of matter, energy, space and time.” The crowd cheered them on, with the occasional question about the Higgs boson or whether the particle accelerator was currently running.

“People were shouting, ‘Yay, Fermilab!’” said Kathleen Venn Bowers, a human resources specialist who marched in the Aurora parade, costumed as a bison, Fermilab’s unofficial mascot. “I will take away those memories for life. Everyone was so energized. It was great to be there as a team to support EDI [equity, diversity and inclusion] that we are trying so hard to bring about both at the lab and in society.”

The goal was twofold: Empower Fermilab’s LGBTQ+ community by showing official support for Pride celebrations, and make sure people in the wider LGBTQ+ community know that STEM careers are an option for them.

Spectrum has led several initiatives to make Fermilab more inclusive, including increasing the number of gender-neutral bathrooms, conducting Safe Zone trainings, and updating Fermilab forms to be gender neutral or reflect non-binary identities. The group is also working through requirements to participate in the Human Rights Campaign’s Corporate Equality Index, which rates workplaces on their inclusive practices.

“Fermilab formed Spectrum in 2015 to bring greater focus and support to the LGBTQ+ community. Participation in the Pride parade is an important step in raising awareness of our efforts,” said Sandra Charles, who leads Fermilab’s equity, diversity and inclusion office. “Our work, and the work of every member of the Fermilab community, is to embed a culture where every individual feels fully supported and valued—because they are.” 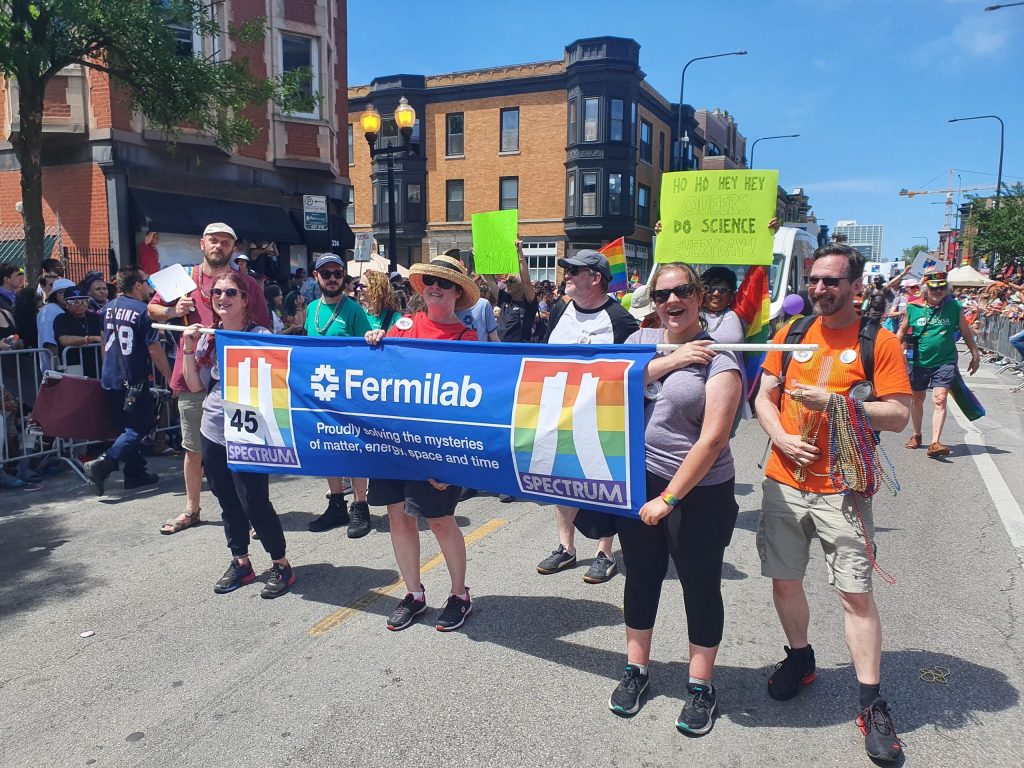 While marching down Chicago’s Halsted Street, Fermilab senior compensation analyst Pete Cholewinski reflected on the shift in attitudes toward the LGBTQ+ community and his own journey.

“I remembered being a young man, recently out, repressed, walking down this same street,” said Cholewinski, who is a Spectrum board member, along with Reising and Snider. “I never would have imagined that someday I’d be a proudly out and married gay man, marching down the middle of the street with my co-workers, all of us supported by our workplace and cheered on by a huge crowd.”

Buoyed by the experience, members of Spectrum have plans to march in Pride parades again next year.

“I felt we were the source of some of the energy people feel when they come to the parade,” Snider said. “I’m really happy we were able to give Fermilab a presence and be visible in this special way.”