Just as the sound of a guitar depends on its strings and the materials used for its body, the performance of a quantum computer depends on the composition of its building blocks. Arguably the most critical components are the devices that encode information in quantum computers.

One such device is the transmon qubit — a patterned chip made of metallic niobium layers on top of a substrate, such as silicon. Between the two materials resides an ultrathin layer that contains both niobium and silicon. The compounds of this layer are known as silicides (NbxSiy). Their impact on the performance of transmon qubits has not been well understood — until now. 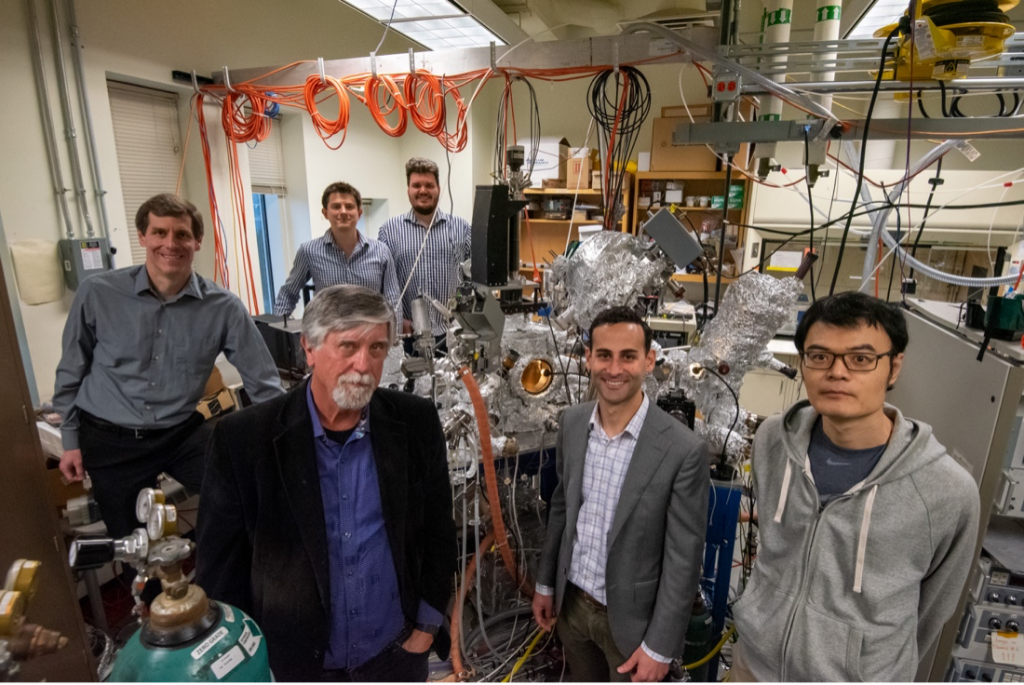 Silicides form when elemental niobium is deposited onto silicon during the fabrication process of a transmon qubit. They need to be well understood to make devices that reliably and efficiently store quantum information for as long as possible.

Researchers at the Superconducting Quantum Materials and Systems Center, hosted by the U.S. Department of Energy’s Fermi National Accelerator Laboratory, have discovered how silicides impact the performance of transmon qubits. Their research has been published in APS Physical Review Materials.

Carlos Torres-Castanedo was analyzing the materials of a transmon qubit using x-rays, when he came across a peculiar signal.

“I thought the signal came from a surface oxide, because that’s just what usually happens,” said Torres-Castanedo, a doctoral candidate in materials science at Northwestern University. “After spending a day trying to fit the data to match an oxide, the only possibility was to introduce a niobium silicide layer. When the data beautifully fit the model, I showed the results to my co-workers, and we all became excited about what this could mean for transmon qubit performance.”

The SQMS Center researchers dug deeper. They identified the types of silicides present, the thickness of the layer — typically only a few nanometers thick — and its physical and chemical structure. After completing these measurements, they focused on figuring out how these compounds affect the performance of qubits.

The researchers simulated different types of silicides. Not only did they find that silicides are detrimental to the performance of transmon qubits, but they also found that some are more detrimental than others.

Qubits are the basic and fragile units of information that a quantum computer uses to perform calculations. They are physically encoded through transmon qubits.

Similar to a street performer plucking an A note on a guitar string and allowing the tone to ring out before it becomes obscured by street noise, quantum information in a transmon qubit exists for a limited time before it dissipates or is obscured by environmental noise. This time span is known as the coherence time. The longer the coherence time, the better the performance of the transmon qubit.

“This interface will never be like silicon stop, niobium start,” said SQMS Center researcher James Rondinelli, Walter Dill Scott Professor of Materials Science and Engineering at Northwestern University. “The first observation was that there is not an atomically sharp interface, but rather a compositional gradient between the silicon substrate —which is the platform for the system — and the niobium.”

With that observation, Rondinelli and his group began a detailed computational study as part of a greater SQMS Center effort to improve qubit coherence times.

Simulations with a supercomputer

With a newfound curiosity about what the presence of silicides could mean for transmon qubits, the researchers used a supercomputer at the National Energy Research Scientific Computing Center, located at the DOE’s Lawrence Berkley National Laboratory.

Think of silicides as a thin material inside the street performer’s guitar that affects the sound of the guitar string. Researchers studying transmon qubits are essentially trying to isolate an A note and seeing to what extent the hidden material interferes.

Through simulations, researchers found that the silicide compound Nb6Si5 does not have any magnetic properties, while Nb5Si3 introduces magnetic noise. If silicides will always be present in transmon qubits, whether researchers like it or not, Nb6Si5 is less detrimental, and scientists will have to make do.

“To really push the field forward, you have to embrace a little bit of an outsider perspective to make an advancement, and we’re optimistic our multidisciplinary approach will solve this challenge.” – James Rondinelli, SQMS Center researcher

“I find it interesting how the research on the properties of these silicides have been studied since the ’80s, but never have been understood in a nanometer-sized film,” said Torres-Castanedo. “I feel proud that I was able to work alongside my fellow researchers to conduct this important study.”

These findings by themselves are significant. In the greater context of the SQMS Center’s aim to develop a state-of-the-art quantum computer, however, the results have much further implications than just understanding the properties of materials.

“The community who’s worked on superconducting qubits has traditionally been quantum physicists and engineers. The reason the SQMS Center has been so successful is they’ve embraced material scientists,” said Rondinelli. “To really push the field forward, you have to embrace a little bit of an outsider perspective to make an advancement, and we’re optimistic our multidisciplinary approach will solve this challenge.”