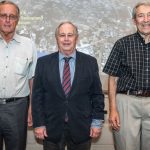 Our world is governed by general relativity, which sees gravity as the effects of massive objects warping space-time. The world of particle physics, on the other hand, envisions all forces as mediated by force-carrying particles — and ignores gravity entirely. This year’s Breakthrough Prize in Fundamental Physics was awarded to three theorists who proposed a way to marry these contradictory descriptions: with a theory called “supergravity.”