Neutrinos are as mysterious as they are ubiquitous. One of the most abundant particles in the universe, they pass through most matter unnoticed. Their masses are so tiny that so far no experiment has succeeded in measuring them, while they travel at nearly the speed of light.

The MicroBooNE neutrino experiment at the Department of Energy’s Fermilab has published a new measurement that helps paint a more detailed portrait of the neutrino. This measurement more precisely targets one of the processes arising from the interaction of a neutrino with an atomic nucleus, one with a fancy name: charged-current quasielastic scattering.

Physicists have spent a lot of time exploring the properties of these invisible particles. In 1962, they discovered that neutrinos come in more than one type, or flavor. By the end of the century, scientists had identified three flavors and also discovered that neutrinos could switch flavor through a process called oscillation. This surprising fact represents a revolution in physics: the first known evidence of physics beyond the extremely successful Standard Model. 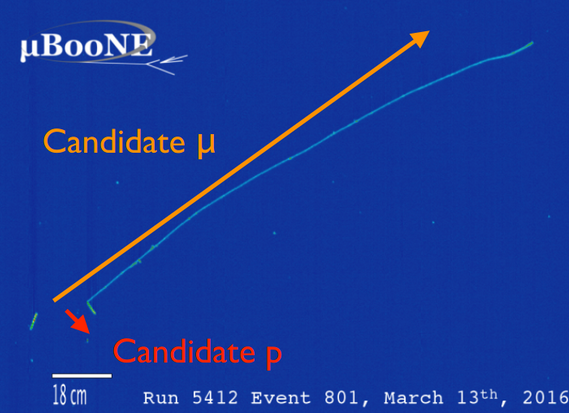 This shows the tracks of particles resulting from a candidate CCQE interaction of a neutrino with an argon nucleus inside the MicroBooNE detector. The long trail of a muon is seen shooting to the upper right, and the shorter trail of a proton is heading to the lower right. Image: MicroBooNE

Given the abundance of unanswered questions related to these elusive particles, neutrino physics is about to enter a new era of high-precision measurements, where forthcoming experiments will try to extract the oscillation parameters with unprecedented accuracy. These experiments will use state-of-the-art detectors to measure neutrino interactions. For the experiments to be a success, accurate modeling of neutrino-nucleus interactions in their simulations is a must.

Liquid-argon time projection chambers are powerful particle detectors that allow us to study neutrino interactions in detail, and these measurements can be used to benchmark the validity of neutrino interaction models in current simulations. The MicroBooNE neutrino experiment is the first large-scale operating experiment at Fermilab to use this novel detector technology. It has already collected a wealth of neutrino scattering events over the course of the past five years.

When a neutrino interacts with a nucleus, it can produce a muon (a cousin of the electron) and a proton through charged-current quasielastic scattering, or CCQE scattering. MicroBooNE published in Physical Review Letters the first measurement of CCQE-like interactions on argon for events that produce a single muon and a single proton, but no charged pions — another kind of subatomic particle that often arises from neutrino interactions with matter. This measurement constrains calculations essential for future measurements and identifies regions where improvement of theoretical models is required.

This result is of great importance for all future neutrino oscillation experiments that will use argon-target detectors, such as experiments of the Short-Baseline Neutrino program and the international Deep Underground Neutrino Experiment, both hosted by Fermilab, which will rely on precise modeling of neutrino interactions on argon to reach their projected sensitivities.

This work is supported by the DOE Office of Science and the Visiting Scholars Award Program of the Universities Research Association.