Mayling Wong-Squires became Farah Fahim’s mentor in 2019 through a mentorship program at the Department of Energy’s Fermilab. Fahim is now a principal engineer and deputy head of quantum science. She works on microelectronics for detectors and sensors operating in extreme environments. In 2019 she’d just received her Ph.D. and was returning from maternity leave. Wong-Squires, principal engineer and head of the Mechanical Support Department in the Accelerator Division, had four years under her belt in leading a team that supports accelerator operations and all its auxiliary mechanical systems. Their relationship has bridged the gap from colleague to friend, and that perhaps even wider chasm — from electrical to mechanical engineering. 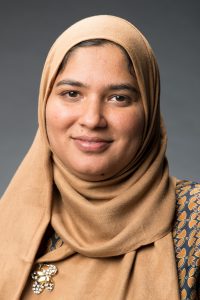 Do you feel like being mentored has contributed to you succeeding in your pursuit of leadership at the lab?
FF: Definitely. When we started our mentoring relationship, I did not have a leadership role.

I suffer from impostor syndrome and often have many doubts about myself. Mayling makes me feel I deserve to be where I need to be. I tend to have more confidence in myself when somebody else has confidence in me.

Other than that, it’s basically me lamenting to Mayling all the time. You find that when you’re an engineer getting into any leadership role, you need to change a great deal because your work shifts from being technical, which is all about logic and expertise, to being managerial, which is all about relationships and communication. Having Mayling there helped me a great deal to gain the right perspective, I am undergoing growing pains, as she calls it.

MWS: Farah, you make me sound like I’m so knowledgeable or wise or whatever. Truthfully, from my perspective, all I did was listen. And maybe if I had something to share, I’d share my experience. It’s so good to hear that whatever I did helped, because it was so easy.

I do think it’s valuable for us to have that person, that mentor to just listen without judgment, without criticism and to encourage. But it’s clear to me you are very good at what you do. You are so knowledgeable in your area of expertise. How could I not say that you are good at it?

FF: When you have somebody providing that encouragement, not trying to fix things but truly listening, it helps you to think things through!

Of course, I cannot talk about some of these things with anybody else. I have this open environment with Mayling. There have been days where I’ve just whined. Someone says, “Oh, it changes, it gets better, I think you’re doing the right thing.” That becomes the voice of reason in my head, even when Mayling is not there.

I think if I didn’t have that, I would have quit and run. Having somebody express that faith in you — it makes a huge difference. 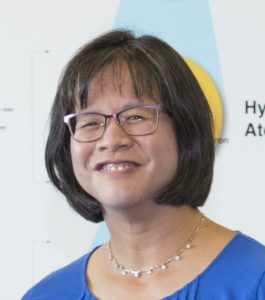 What do you think is the importance of mentor-mentee relationships for women in STEM?
MWS: Right now, there are fewer women in STEM than men. So a woman may not see someone that looks like herself in the classroom, in the office or in the meeting room. This may compound any doubts or concerns that she has. To hear that from a mentor, especially for a woman to say to another woman, “You be you and you are good at what you do and don’t forget that,” that is really valuable.

FF: Mayling is right. I’m not trying to generalize here. The way we approach things as women — there are men who approach things like this as well — but overwhelmingly women tend to internalize things. Our failures mean more to us than our successes do. What I mean by that is that when we do have a large success, we probably take a small step within ourselves to feel accomplished, but when we have a failure, we take a large step backwards.

Knowing that we are very self-critical, understanding it, people saying we tend to be that way, that does help a great deal to overcome self-doubt, which is something that holds women back.

I have always felt it easier to work in the background, not put myself in front, and I share credit with the entire team for my work and accomplishments. It’s almost like I have defined that environment and set up some expectations. It’s not that people are taking advantage of me. It’s because I am not willing to step up and take credit for myself. Then you end up creating that atmosphere, and people end up thinking that’s the way it should be. Finally, when I want to stand up and be recognized, the world around me doesn’t change at the same rate as I am changing. People are taken aback. They don’t think that they’re doing anything wrong. It’s the status quo. Then you struggle more because now you start doubting yourself and enter a vicious cycle of low self-esteem. Notice how my response is also self-critical!

Is there anything we haven’t talked about that you want readers to know?
FF: I want to encourage everybody to get a mentor irrespective of what stage of their career they are in. Role models are good because it’s somebody you aspire to be like, but then when you get to have a mentor, somebody’s showing you the path of how to get there. It’s super useful.

Mayling is a mechanical engineer. I’m an electrical engineer. It’s not the same relationship you would expect from your manager. It has more to do with your personal growth that is required with your new position or your aspirational level. I think that’s what a mentoring relationship really gets, or gives, you. Because along with the technical growth you are getting in your job, you need that personal growth and maturity to climb up the ladder or work with different people or whatever it is that you’re trying to achieve. Mentoring gets you that aspect.

MWS: The work at the lab is unique and calls for engineers to concentrate technically in specialized areas. So on the surface, a mechanical engineer working on accelerators talking to an ASIC engineer who focuses on detectors — where’s the connection there? But it was a very natural thing for me to talk with Farah, maybe because what she goes through is not uncommon.

And I gained a friend. I’m super proud of her.

***
Fermilab’s mentorship program is designed specifically for employees of the lab.

Fermilab is supported by the DOE Office of Science. The Office of Science is the single largest supporter of basic research in the physical sciences in the United States and is working to address some of the most pressing challenges of our time. For more information, visit science.energy.gov.