The U.S. Department of Energy’s Fermi National Accelerator Laboratory has selected David Biedenbender as its 2021-22 guest composer. The program, now in its second year, provides a composer the opportunity to interpret Fermilab research through music and celebrate the relationship between art and science.

Biedenbender previously composed traditional pieces for orchestras, chamber ensembles and choirs, as well as technologically inspired electronic pieces for contemporary artists. As Fermilab’s guest composer, he plans to explore the lab’s research and engage with scientists to musically explore questions such as: What might particles colliding sound like? How might one transform data points into sound? 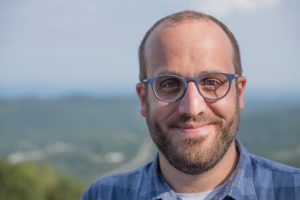 Biedenbender, a Michigan State University professor of composition, has worked on the intersection of physics and music before. In 2016, he created a choral work, “Flux,” to sonify that concept, also known as rate of flow. In 2017 he composed “Cyclotron,” a 10-minute wind ensemble piece inspired by the particle accelerator at the National Superconducting Cyclotron Laboratory at MSU.

Biedenbender said his first steps are learning about Fermilab projects and talking with researchers to better understand particle physics and the work they do. From there, he can begin experimenting with different sounds and instruments to musically interpret the science.

“My hope is to use music to help those who may not know much about the subatomic world learn about and reflect on some of the amazing phenomena, questions and experiments that happen at Fermilab,” Biedenbender said.

For Biedenbender, collaboration is a core tenet of his work. While he plans to learn from Fermilab’s researchers, he also hopes scientists might hear a fresh perspective on their work.

“The thing I love most is connecting with people and sharing music with them, and seeing what it sparks in them,” Biedenbender said. “I find incredible inspiration and synergy in exploring the curiosity and creativity at the intersection of music and science.”

Biedenbender will work with researchers throughout the year and likely present a virtual public talk about his work before a concert at the end of his residency.

“David is an incredible young composer,” said Janet Mackay-Galbraith, who manages Fermilab’s performing arts program. “He comes to the project with a history of physics-inspired composition, and through this collaboration, he will be able to delve more deeply into Fermilab research specifically. At this point, he has a blank canvas, so I am excited to see where his interests take him.”

Fermilab’s guest composer program began last year. The 2020 guest composer, David Ibbett, is working on an album of neutrino-themed music, several songs off which have already been released. Alongside Biedenbender, Fermilab has also selected a 2021-22 artist-in-residence, visual artist Mare Hirsch.