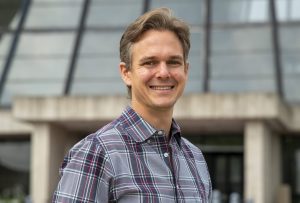 The Cryogenic Society of America has awarded Benjamin Hansen, head of Fermilab’s Cryogenics Operations Department, its Award for Excellence in Cryogenic Operations and Support. This award is given for excellence in establishing, improving or simplifying processes in cryogenic operations or for excellence in developing or implementing techniques involving the fabrication, joining, assembly, wiring, checkout or operation of cryogenic systems.

Hansen received the award for his leadership in maintaining and operating six helium cryogenic test facilities that service many superconducting accelerator R&D test programs across the lab. Those include the LCLS-II Cryomodule test program, the PIP-II Injector Test, NML’s Fermilab Accelerator Science and Technology facility, and the Mu2e Solenoid test program.

Among other important technical contributions, Hansen played a central role in commissioning and operating the Cryomodule Test Facility’s superfluid coldbox and cryogenic distribution system. Cryogenics are critical to operating all high-priority programs at Fermilab. He now leads the cryogenic system upgrade at the Industrial Building-1 and manages the PIP-II Cryoplant.