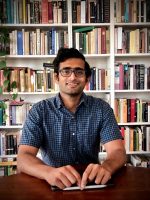 The Superconducting Quantum Materials and Systems Center hosted by Fermilab is proud to announce the addition of a new contributing partner: Rutgers University-New Brunswick.

The SQMS Center was established in September 2020 as a National Quantum Information Science Research Center. It comprises a diverse group of collaborators from a variety of disciplines and backgrounds.

“Rutgers is extremely excited by this opportunity to collaborate with the efforts of SQMS. Quantum information science is a high-priority area for the university,” said Robert Bartynski, chair of the department of physics and astronomy at Rutgers-New Brunswick.

Srivatsan Chakram, an assistant professor in the department of physics and astronomy at Rutgers-New Brunswick, will serve as one of the principal investigators in the SQMS technology thrust, specifically in the devices and materials focus areas. “Having Professor Chakram as a principal investigator forms a natural bridge between the complementary expertise present at both organizations,” said Bartynski.

A primary focus of the SQMS Center is the extension of the lifetime of qubits, the foundational element of quantum computing. Extending the lifetime, or coherence time, of qubits increases the amount of time that they can exist in a quantum state and hold quantum information.

“It’s great to be part of this collaboration, which I think will be very fruitful,” said Chakram. “Fermilab makes the best cavities in the world. The best cavities I have made can store single microwave photons for a few milliseconds. The cavities made at Fermilab have lifetimes approaching a second. Leveraging the extraordinary coherence of the Fermilab cavities should allow us to build better quantum processors. I have some expertise with designing and building these kinds of systems, so I think this collaboration will be mutually beneficial.”

The addition of new collaborators requires review from the center’s leadership and must be approved by the Office of Science of the U.S. Department of Energy. New partners can be added to increase technical capabilities and strengthen the SQMS Center. The addition of a new partner often meets a specific need.

“The strength of SQMS is that it brings world experts in quantum information science together as one collaboration,” said SQMS Director Anna Grassellino of Fermilab. “Professor Chakram is one such expert, and we are thrilled to welcome him to the SQMS Center.”