The U.S. Department of Energy has awarded Fermi National Accelerator Laboratory an award as part of its Building Envelope Campaign for the design of the Industrial Center Building Addition, or ICB-A. The ICB-A received recognition as a new building that performs above code because it uses emerging high-performance technology for its building envelope, which includes windows, exterior walls and roofs. In fact, its building envelope surpassed the award’s criteria of a 20% improvement over current building code, providing a 25% improvement. Oft-overlooked, building envelopes account for almost a third of consumed energy in commercial buildings. They also affect quality of life factors, such as natural light and comfort. 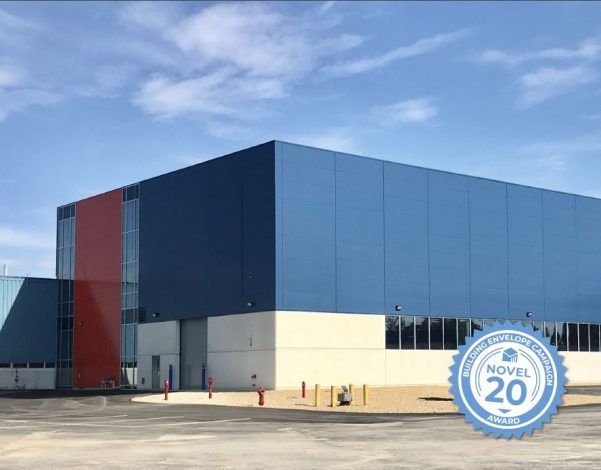 Designing a building envelope with a significant improvement over code must balance funding the energy-efficient assemblies required for federal buildings and creating a new building that satisfies the end users’ programming needs.

For ICB-A, the building envelope specifications alone would have only achieved about a 15% improvement.

Because ICB-A connects two existing facilities, the addition was strategically located to provide direct access to surrounding assembly areas while eliminating over 7,000 square feet of building envelope exposed to the outdoor environment. Placement of the roughly 25,000-square-foot addition combined with energy-efficient windows, exterior walls and roofs gave the building its performance boost.

Maintaining daily operations at the existing buildings, reinforcing those existing roofs to accommodate snowdrift during construction, and integrating systems, such as fire alarm systems, were all problems that had to be solved to make ICB-A a success.

At the time the design choices were made, the architects had no way to quantify the energy savings. It was accepted because of the presumed construction and utility savings from eliminating square footage. But the Building Envelope Campaign offered metrics that could realize the design achievement at ICB-A. Ultimately, this validated the design approach.

Many departments collaborated to coordinate construction with all other operations. These teams made sure that ICB-A met all performance requirements and was constructed with minimal operational impacts. This included the Applied Physics and Superconducting Technology Division; the Budget Office; Environment, Safety and Health; the Facilities Engineering Services Section; and Procurement.

Aside from energy and construction concerns, the project balances many needs for the lab. Its high-bay areas will be the building site for superconducting radio frequency cryomodules and superconducting magnets for accelerators at Fermilab and partner institutions. The design also accommodates a 40-ton bridge crane, low-bay workbench area, mezzanine area that could be used for future offices, and a cryostat assembly area that will service the High-Luminosity Large Hadron Collider upgrade.

ICB-A’s design aligns with the 2018 Fermilab Campus Master Plan, as it will help centralize activities and improve access and circulation in the industrial building complex.