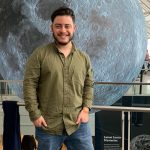 Hector Carranza Jr. of the University of Texas at Arlington has received the prestigious Department of Energy Office of Science Graduate Student Research award, or SCGSR, to conduct his research at Fermilab. DOE awarded the fellowship to 62 students from U.S. universities. He will work on light-mass dark matter searches at the ICARUS neutrino experiment.

President Donald J. Trump presides over swearing in of Dan Brouillette as 15th secretary of energy

From DOE, Dec. 11, 2019: Secretary Brouillette served in the U.S. Army and has three decades of experience in both the public and private sector, most recently as the deputy secretary of energy.

From DOE, Dec. 9, 2019: Fermilab scientist Josh Frieman writes about the search for the nature of dark energy at the national laboratories and how the Office of Science’s High Energy Physics program has been at the vanguard of a number of cosmic surveys.

Dan Brouillette confirmed by the U.S. Senate to be secretary of energy 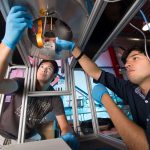 In their ongoing search for the mysterious dark matter that makes up 85% of our universe, the particle physics community turns its sights to particles of low mass. The Department of Energy announced that it is providing funding for two Fermilab initiatives to develop experimental designs for experiments that will be highly sensitive to the smallest particles of dark matter. Following the development of the experimental designs, the next phase of funding will be subject to additional reviews and approval. 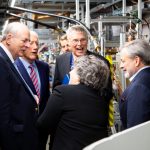 On Oct. 1, Deputy Secretary of Energy Dan Brouillette and members of the U.S. Secretary of Energy Advisory Board visited Fermilab to see first-hand its world-class facilities for exploring particle physics, accelerator science and technology, and quantum science.

What they are saying: support for DOE’s new Artificial Intelligence and Technology Office

Secretary Perry stands up Office for Artificial Intelligence and Technology

From DOE, Sept. 6, 2019: U.S. Secretary of Energy Rick Perry announces the establishment of the DOE Artificial Intelligence and Technology Office. The secretary has established the office to serve as the coordinating hub for the work being done across the DOE enterprise in artificial intelligence. This action has been taken as part of the President’s call for a national AI strategy to ensure AI technologies are developed to positively impact the lives of Americans. 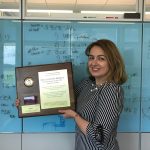 The DOE Project Leadership Institute has recognized Lari and her capstone project teammates for for their outstanding case study analysis with the 2018 Capstone Project Award.

From AIP’s FYI, May 27, 2019: The American Institute of Physics touts progress on the P5 plan with a photo of the ProtoDUNE detector and info on the international Deep Underground Neutrino Experiment, hosted by Fermilab.