When it comes to developing quantum computers and harnessing quantum information, scientists require a complete understanding of the materials that make up superconducting qubits, or quantum bits, the core component of a quantum computer that holds information. Scientists at the U.S. Department of Energy’s Fermi National Accelerator Laboratory, along with collaborators such as Rigetti Computing and the National Institute of Standards and Technology, have used a new technique to identify impurities within physical qubits that can limit the lifespan of quantum information. 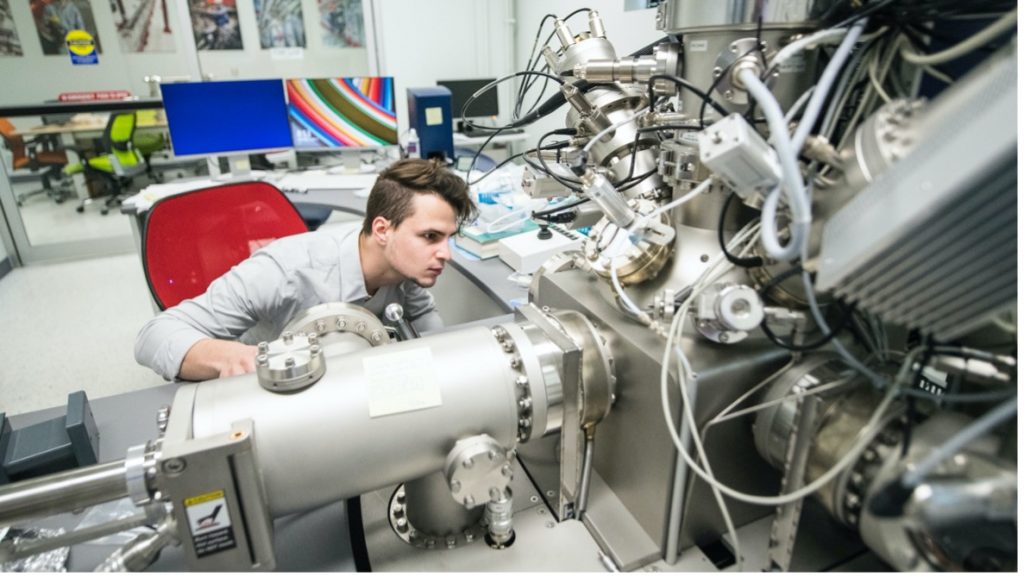 Daniel Bafia examines the TOF-SIMS equipment located in a material science laboratory at Fermilab. Use of this equipment has allowed SQMS researchers to study impurities in superconducting qubits at the part per million level. Photo: Reidar Hahn, Fermilab

Quantum decoherence is the phenomenon where noise originating from various factors can limit the lifespan over which quantum information can be stored. This phenomenon adversely affects the performance of quantum computers, which rely on quantum information to perform calculations. When scientists successfully build qubits less impacted by sources of quantum decoherence, the power of quantum computers will be unlocked, and scientists will have a new tool to perform calculations difficult or impossible for classical computers to solve.

Quantum computers are designed to solve problems that require large amounts of memory, and through the use of a quantum mechanical property called superposition, these computers will be able to analyze systems that contain large amounts of data, such as traffic patterns, weather predictions, financial modeling and much more.

“In superconducting qubits, we’ve long wondered what underlying materials properties affect the performance of quantum computers,” said Josh Mutus, director of quantum materials at Rigetti Computing. “Now SQMS researchers have been able to examine Rigetti devices with high-precision analytical equipment in order to uncover potential defect systems that we were never able to explore before.”

Impurities found within materials that comprise superconducting qubits can be attributed to causing quantum decoherence, which scientists at the Fermilab-led Superconducting Quantum Materials and Systems Center have highlighted in a paper published in the Applied Physics Letters journal.

Through a three-dimensional analysis of the qubit at the atomic level, scientists revealed impurities that include elements such as oxygen, hydrogen, carbon, chlorine, fluorine, sodium, magnesium and calcium.

To uncover these impurities, scientists use a device called the TOF-SIMS, or time-of-flight secondary ion mass spectrometer, to rapidly fire ions at a qubit and chip away at it. The ions chipped from the qubit’s surface are analyzed in a sensor in the instrument where the constituent elements can be identified with part per million accuracies.

“Our initial goal, as part of the center, was to identify precisely what is within a qubit sample in terms of impurities and defects. Once we have access to that information, we are then in a solid position to build strategies to remove these impurities and boost performance,” said Akshay Murthy, the primary author of this publication and research associate at the SQMS Center. “This is the sort of information that we need to move to the next step.”

The TOF-SIMS instrument was originally purchased for the superconducting radio frequency research program at Fermilab to identify impurities in accelerator cavities used to push particles in a particle accelerator. Now, for the very first time, the TOF-SIMS device has been used to analyze qubits. Impurities in the materials that make up accelerator cavities also impact performance, which makes this instrument applicable for SQMS scientists who are also identifying impurities in materials that compromise or help other superconducting technologies.

“Our initial goal as part of the center was to identify precisely what it is within the sample in terms of impurities and defects. Once we have access to that information, we are then in a solid position to build strategies to remove these impurities and boost performance,” said Akshay Murthy

“The tools needed to perform this characterization are not only specialized and expensive, but also require experienced scientists to acquire and analyze the data,” said Anthony McFadden, a qubit fabrication expert at NIST. “The collaborations formed within SQMS take advantage of specialized equipment and expertise in place at Fermilab and institutions around the country.”

The TOF-SIMS identifies atoms from the top level and etches away downward through the qubit, generating a three-dimensional profile of the elements and compounds that comprise the qubit and identifying where and what type of impurities are present.

“This work has illuminated some often-overlooked sources of decoherence commonly formed during device-processing,” said McFadden.

Qubits can be made by depositing a layer of superconducting niobium on silicon. Scientists vaporize the niobium into a gas, and just as water vapor forms ice on cold metal during the winter, niobium solidifies and forms a film on top of the silicon.

Murthy said that the original chamber for integrating the niobium, or the configuration of the niobium atoms on the film, might contribute to impurities on the qubit. Analysis from the TOF-SIMS can be used to refine the process for creating qubits from a materials and method point of view. 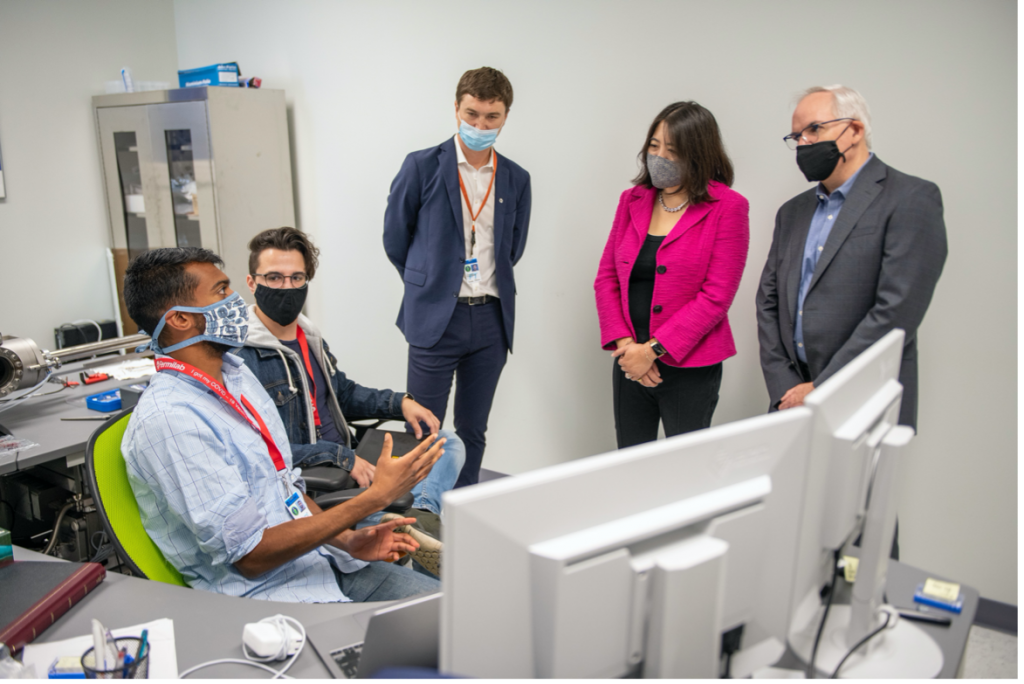 The TOF-SIMS setup at Fermilab not only identifies impurities, but it also has a treatment chamber used to heat different materials and change parameters to help scientists study the qubit’s chemical composition and furthermore, mimic fabrication processes.

“By having access to this additional treatment chamber, we can now perform a treatment and then directly analyze and assess its impact on the structure and resultant properties of the sample,” said Murthy.

The next steps are to quantify the effects of sources of decoherence and to engineer processes that avoid these effects altogether.

“Through analyzing qubits with our TOF-SIMS setup, we are now able to examine each step in the fabrication process to identify when impurities become present,” said Alexander Romanenko, Fermilab’s chief technology officer and head of the Applied Physics and Superconducting Technology Division. “Fermilab is the world expert on superconducting technologies for particle accelerators, and through sharing facilities and expertise at the lab with our SQMS partners, we hope to play an integral role in providing the world with the next leap in computing. Our facilities allow us to conduct world-class research on the materials that further the field of quantum information sciences.”

The Superconducting Quantum Materials and Systems Center is one of the five U.S. Department of Energy National Quantum Information Science Research Centers. Led by Fermi National Accelerator Laboratory, SQMS is a collaboration of 21 partner institutions—national labs, academia and industry—working together to bring transformational advances in the field of quantum information science. The center leverages Fermilab’s expertise in building complex particle accelerators to engineer multiqubit quantum processor platforms based on state-of-the-art qubits and superconducting technologies. Working hand in hand with embedded industry partners, SQMS will build a quantum computer and new quantum sensors at Fermilab, which will open unprecedented computational opportunities. For more information, please visit https://sqms.fnal.gov.