Five National Quantum Information Science Research Centers are leveraging the behavior of nature at the smallest scales to develop technologies for science’s most complex problems. Funded by the U.S. Department of Energy Office of Science, the NQISRCs have been supporting DOE’s mission since 2020 to advance the energy, economic and national security of the United States. By building a national quantum ecosystem and workforce comprising researchers at roughly 70 institutions across the United States, the centers create a rich environment for quantum innovation and co-design. 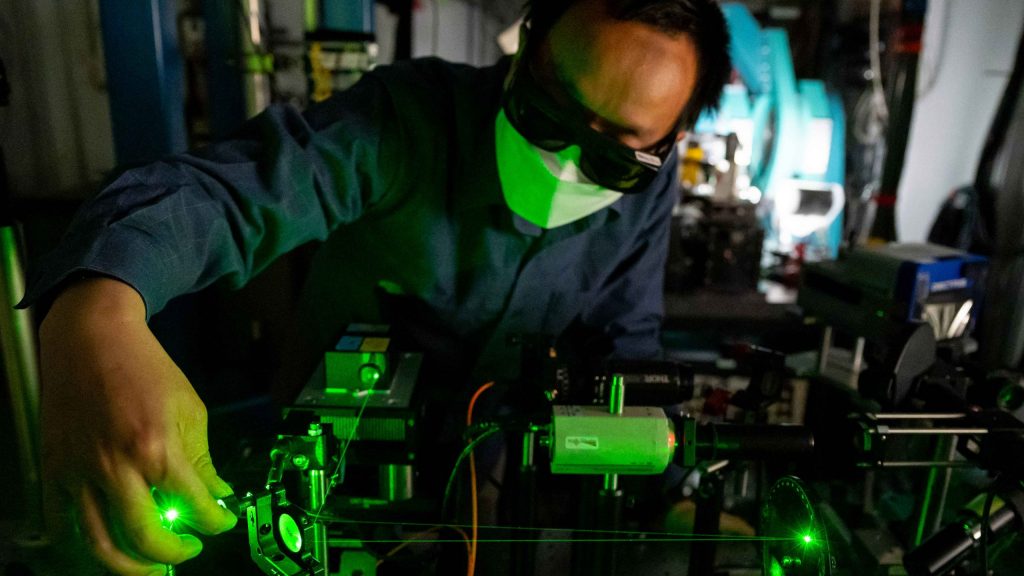 As a result, the centers are pushing the frontier of what’s possible in quantum computers, sensors, devices, materials and much more.

Each national center is led by a DOE national laboratory:

“Each center is a formidable force for quantum information science on its own, pushing the frontiers of computing, physics, chemistry and materials science to bring transformational new technologies to the nation,” said Q-NEXT Director David Awschalom. “But together, they’re a national powerhouse, elevating quantum science and engineering to special prominence in the U.S. and positioning the country to be a global leader in the field.”

To that end, the centers are working to prototype and evaluate the performance and impact of quantum computers and sensors built using various technological platforms and architectures. 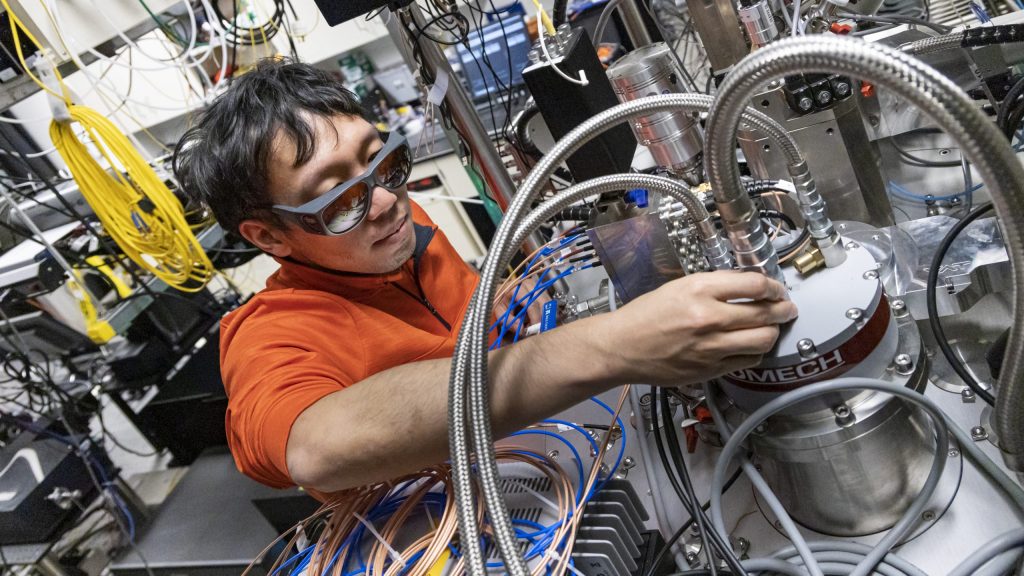 “There are many choices and opportunities to be made in the development of quantum computing, and understanding how current devices fail reveals to us the path forward,” said C2QA Director Andrew Houck. “The NQISRCs can tackle this surprisingly hard task because, despite great strides in the field, current quantum computers are still too noisy and prone to error for useful computations.”

Understanding the quantum behavior of materials is crucial for overcoming these noise limitations and for the realization of devices that will offer a quantum advantage. The national labs are uniquely positioned to offer advanced facilities and knowledge that guide the understanding and overcoming of these limitations.

“DOE has invested for years in cutting-edge technologies, tools and facilities at national labs, which offer unique opportunities to enable a leap in performance of quantum devices,” said SQMS Director Anna Grassellino. “We are excited to offer world-leading expertise to make transformational advances in QIS, especially because QIS can help advance our mission of understanding the world at its most fundamental level.”

The interdisciplinary teams at the NQISRCs co-design quantum technologies to set the stage for future scientific discoveries. Advances in QIS will bring about society-wide benefits, such as new materials and powerful quantum sensors that, when combined with medical imagers, could measure tissue at the individual cell level, bringing far greater sensitivity to today’s magnetic resonance imaging machines.

By understanding what enables and limits different quantum technologies and what tools need to be developed, the co-design effort across the NQISRCs could translate into faster drug and vaccine development, novel materials, improvements in transportation and logistics, and more secure financial networks.

“DOE has invested for years in cutting-edge technologies, tools and facilities at national labs, which offer unique opportunities to enable a leap in performance of quantum devices. We are excited to offer world-leading expertise to make transformational advances in QIS, especially because QIS can help advance our mission of understanding the world at its most fundamental level.” – SQMS Center Director Anna Grassellino

“Through the funding of these strategic quantum centers, DOE has given researchers an incredible opportunity to make impactful and world-changing discoveries in QIS,” said QSC Director Travis Humble. “Based on the first two years of operation, there is every reason to believe these centers will make tremendous progress in the coming years in advancing QIS toward real-world innovation. We will see an increasing flow of discovery science through the innovation chain.”

Similarly, laboratory and university scientists can leverage the market-driven technologies developed by their industry partners, such as test beds and simulation tools. Capitalizing on these networks, each center builds a pathway to commercializing quantum technologies and, eventually, bringing them to the public.

Preparing the quantum workforce and engaging with industry

The lasting impact of the NQISRCs co-design efforts for science and technology will depend on a quantum workforce to carry it into the future. All national centers are committed to building a workforce with a focus on diversity, equity and inclusion through institutional degree programs, cooperative training programs with industry and retraining certificate programs. This sets the stage for many more innovations and fundamental science questions to be explored.

“The centers have taken a multipronged approach to train the next generation of QIS scientists and researchers and to create new pipelines for underrepresented groups,” expressed QSA Director Irfan Siddiqi. “We’re all putting forth special efforts to support a diverse quantum workforce in a fast-growing field.” 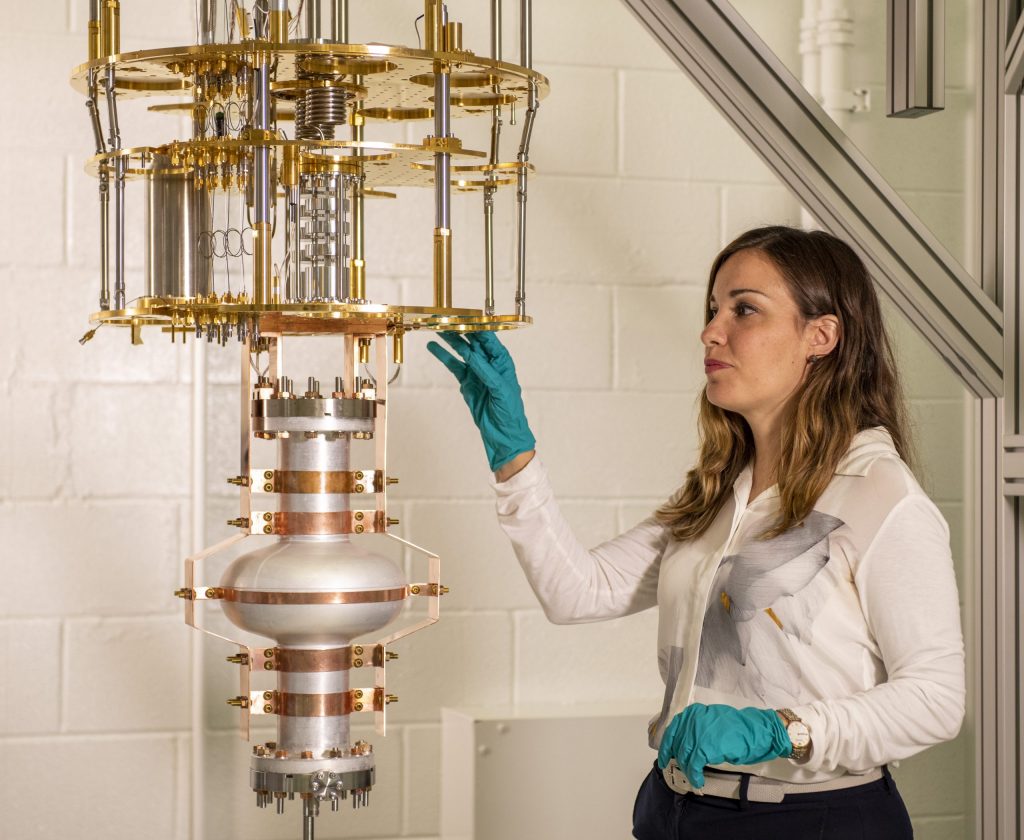 The QSC at Oak Ridge National Laboratory, for example, held its second annual quantum summer school in May, a forum for sharing QIS topics with high schoolers, college students, postdocs and professionals. The event included panels on workforce development strategies with leading industry representatives as well as networking opportunities for students and staff.

C2QA recently held its second six-week-long quantum computing summer school, QIS101, for undergraduate students this year with a focus on building fundamental and practical skills and growing a diverse quantum workforce. 40% of the participants in C2QA’s summer session were women, and nearly 44% were from communities underrepresented in QIS.

Q-NEXT partners with other quantum institutions to build a more diverse and inclusive quantum workforce through the Open Quantum Initiative, a group led by the Chicago Quantum Exchange. One key effort was the creation of an undergraduate fellowship program for underrepresented, racially minoritized quantum scientists. This summer, fellows worked side-by-side with scientists at collaborating institutions on challenging projects in QIS.

QSA works closely with several regional and international companies with strong records in diversity and inclusion programs. Furthermore, it is partnering with local economic development boards already active in the industry to establish internship and apprenticeship programs and accelerate startups. QSA hosted in 2021 its industry and investor roundtable events, attended by dozens of founders, investors, CEOs, senior scientists and engineers from across the United States and worldwide.

SQMS has announced the recipient of the first Carolyn B. Parker Fellowship, named for Carolyn Beatrice Parker, who was the first African-American woman to earn a postgraduate degree in physics. The center is currently recruiting for a second Parker fellow and is wrapping up the second annual undergraduate internship program as well as the SQMS QIS Summer School, co-hosted by INFN at the Galileo Galilei Institute in Florence, Italy.

On Sept. 14, Brookhaven National Laboratory will host the second NQISRC Virtual Quantum Career Fair. The event aims to make undergraduate, graduate and postdoc communities more aware of the DOE Office of Science’s NQISRCs and the different types of careers in QIS at the centers—from technical to non-STEM careers. The first NQISRC career fair, held in fall 2021, attracted close to 400 participants, with 12% representation from minority-serving institutions.

Advances in quantum information science have the potential to revolutionize research and society. The NQISRCs are at the forefront of this emerging field by developing technologies that go beyond what’s previously possible. Learn more about each center at DOE’s website.