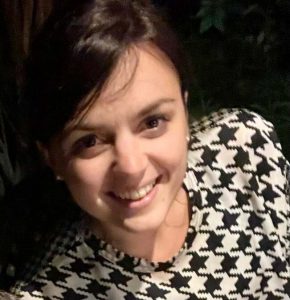 Maria Vincenzi won the 2022 URA Graduate Thesis Award for her contributions to the Dark Energy Survey through the framework she developed in her thesis, written at the University of Portsmouth. Photo: Maria Vincenzi

Researchers with the U.S. Department of Energy’s Fermi National Accelerator Laboratory’s Dark Energy Survey use multiple probes to study how dark energy affects the accelerating expansion of the universe. One of these probes involves measuring how fast the universe is expanding using a specific type of supernovae: type Ia. However, samples of type Ia supernovae can be contaminated by the presence of other supernovae that DES researchers do not use, which complicates the data and can render entire datasets unusable.

Duke University astrophysicist Maria Vincenzi sought to find a solution to this problem. She won the 2022 Graduate Thesis Award from the Universities Research Association for “her extremely thorough thesis ‘Core-collapse contamination in photometric samples of Type Ia Supernovae,’ a key step for cosmology analysis with the Dark Energy Survey.” The award, presented each year at Fermilab’s annual Users Meeting, recognizes outstanding work completed for a thesis at Fermilab or in collaboration with a Fermilab project.

“URA is pleased to recognize Maria Vincenzi and her research on core-collapse contamination and how it relates to our present understanding of dark energy,” said URA President John Mester. “It is important to acknowledge the work of innovative scientists like Duke University’s Vincenzi, which further illustrates Fermilab’s status as a truly national laboratory serving as a hub for research universities across America and the world.”

Type Ia supernovae occur in binary star systems when a white dwarf star starts to pull in the material of another star due to its high density and strong gravitational pull. This process, known as accretion, continues, and the mass of the white dwarf increases until the white dwarf’s mass reaches the Chandrasekhar limit, or 1.4 solar masses. Once it reaches this limit, the star explodes, producing an extremely bright type Ia supernova.

Because type Ia supernovae are so bright, they can be observed using high-powered telescopes and cameras like the Dark Energy Camera at the Cerro Tololo Inter-American Observatory in Chile. They also are all the same brightness, making them an ideal way to measure distances and the expansion of the universe.

“In my thesis, I tried to work on possible ways of tackling this problem without having to throw away lots of good data,” she said. “If you have a bunch of supernovae and you don’t know which are Ia supernovae and which are not, and if you don’t have a way to solve this problem, you are often forced to just not use the data.”

“Instead of throwing away the entire sample, we wanted to address the problem and model this contamination to correct for it,” she said. “All of the modeling we have done allowed us to overcome this issue, and now we are using all the tools I developed during my PhD to make the measurements using the full sample without throwing away any data.”

Studying cosmic acceleration in the future

Vincenzi received degrees in physics and astrophysics from the University of Milan before completing her doctorate at the University of Portsmouth. She said she was particularly interested in her astrophysics classes as an undergraduate student, leading her to complete her master’s degree in astrophysics where she was exposed to the different ways of measuring the expansion of the universe.

“I remember quite vividly the classes where we started talking about the evolution of the universe and how we use different kinds of probes and observations to understand how the universe is evolving,” Vincenzi said. “It was kind of love at first sight, and I was like, ‘OK, these are the kinds of things I want to study.’”

She began working with DES upon starting her PhD program. She has been involved in the collaboration for about five years and was selected as cosmology lead for the supernovae working group and is in charge of the analysis of the final supernovae sample.

“Joining this collaboration was a great opportunity because in a collaboration, your network goes beyond the boundaries of your university,” she said. “Having a large network means you learn a lot because people [who] are either at your same stage in their career or above can teach you so much.”

Vincenzi said she hopes to continue to work on future surveys, such as the Vera Rubin Observatory Large Synoptic Survey Telescope. DES set the stage for large surveys focused on studying cosmic acceleration and dark energy that will use even more advanced technologies to peer deeper into the universe.

“What makes DES exciting is that it is a precursor for experiments that are going to be significantly bigger but will have to face very similar problems and challenges,” she said. “So once DES is done, it will feel like we’re just at the beginning of understanding our universe. And the nice thing is that we won’t have to wait decades for the next big supernovae experiment.”

Because more surveys are being planned, Vincenzi’s work will help not only DES, but other astronomical surveys that rely on type Ia supernovae measurements. Their results will depend on the work Vincenzi did for her thesis, according to award committee head Chris Stoughton.

“The quality and importance of this thesis demonstrates that the future of science at Fermilab is in good hands,” he said.