From APS Physics, April 2018: Over the last five decades, Fermilab scientists have made some of the most fundamental discoveries in particle physics. But the facility may never have been built had a handful of physicists — chief among them the lab’s first director, Robert R. Wilson — not convinced the U.S. Congress of the project’s value. 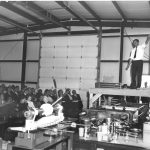 My first year at Fermilab was 1968. Our crew worked closely with Wilson. He was charismatic, friendly and outgoing.

The stair challenge at Oak Brook One day Robert Wilson decided that, instead of taking the elevator, he would climb 10 flights of stairs to work. Some of the rest of us followed his example, and then we got the idea that we’d see who could do it the fastest. Today marks the 100th anniversary of the birth of Fermilab’s first director, Robert Wilson. Here he breaks ground for the Main Ring.