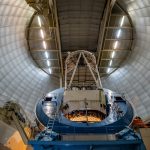 Scientists have begun operating the Dark Energy Spectroscopic Instrument, or DESI, to create a 3-D map of over 30 million galaxies and quasars that will help them understand the nature of dark energy. The new instrument is the most advanced of its kind, with 5,000 robotic positioners that will enable scientists to gather more than 20 times more data than previous surveys. Researchers at Fermilab helped develop the software that will direct these positioners to focus on galaxies several billion light-years away and are currently in the process of fine-tuning the programs used before the last round of testing later this year.