BATAVIA, Illinois – Scientists of the CDF collaboration at the Department of Energy’s Fermi National Accelerator Laboratory announced today (January 8, 2007) the world’s most precise measurement by a single experiment of the mass of the W boson, the carrier of the weak nuclear force and a key parameter of the Standard Model of particles and forces. The new W-mass value leads to an estimate for the mass of the yet-undiscovered Higgs boson that is lighter than previously predicted, in principle making observation of this elusive particle more likely by experiments at the Tevatron particle collider at Fermilab.

Scientists working at the Collider Detector at Fermilab measured the mass of the W boson to be 80,413 +/- 48 MeV/c2, determining the particle’s mass with a precision of 0.06 percent. Calculations based on the Standard Model intricately link the masses of the W boson and the top quark, a particle discovered at Fermilab in 1995, to the mass of the Higgs boson. By measuring the W-boson and top-quark masses with ever greater precision, physicists can restrict the allowable mass range of the Higgs boson, the missing keystone of the Standard Model.

“This new precision determination of the W boson mass by CDF is one of the most challenging and most important measurements from the Tevatron,” said Associate Director for High Energy Physics at DOE’s Office of Science Dr. Robin Staffin. “Together, the W-boson and top-quark masses allow us to triangulate the location of the elusive Higgs boson.”

The CDF result is now the most precise single measurement to date of the W boson mass. Combining the CDF result with other measurements worldwide leads to an average value of the W-boson mass of 80,398 +/- 25 MeV/c2.

Prior to the announcement of the CDF result, ALEPH, an experiment at CERN, the European Center for Nuclear Research, held the record for the most precise W mass measurement. ALEPH and its three sister experiments at CERN, which operated until 2001, made significant contributions to the measurement of the W’s mass. The experiments relied on electron-positron collisions produced by the LEP collider at CERN. In contrast, CDF experimenters are analyzing proton-antiproton collisions produced by Fermilab’s Tevatron, the world’s most powerful particle collider.

“Compared to the electron-positron collisions at LEP, the proton-antiproton collisions at the Tevatron result in a ‘dirty’ environment experimentally,” said Jacobo Konigsberg, University of Florida physicist and CDF cospokesperson. “Every collision produces hundreds of particles along with the W boson that need to be properly accounted for. That’s why our analysis is so challenging.”

Now, having gained a much better understanding of their detector and the processes it records, CDF scientists are optimistic that they can further improve the precision of their W-mass result by a factor of two in the next couple of years.

“You have to sweat every detail of the analysis,” said Fermilab physicist and cospokesperson Robert Roser. “Our scientists cannot take anything for granted in an environment in which composite particles such as protons and antiprotons collide. We need to understand the many different subatomic processes and take into account the capabilities of our detector for identifying the various particles.”

In a talk at Fermilab on Friday, January 5, Ashutosh Kotwal, CDF collaborator and Professor of Physics at Duke University, presented the W-mass result to the scientific community. The result will be submitted in a paper to Physical Review Letters.

This W mass measurement is yet another major result of Tevatron Run II announced by scientists in the last year, indicating the progress that experimenters have made with both the CDF and the DZero experiments at Fermilab. As the two collaborations continue to take data, collaborators press the search for the Higgs boson as well as for signs of dark matter particles and extra dimensions.

“The CDF and DZero experiments have much more data to analyze, and they are observing more and more collisions at a faster and faster rate,” said Fermilab Director Pier Oddone. “Our experimenters are now in a position to look for some of the rarest and most amazing phenomena that theorists have predicted, as well as to find the completely unexpected. This is a very exciting time.” 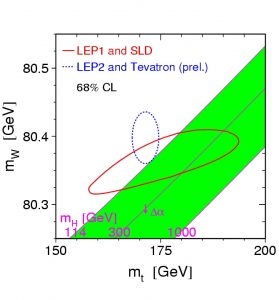 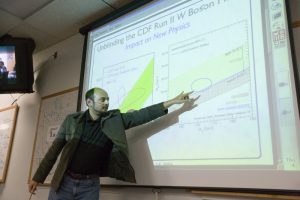 CDF scientists used a blind analysis technique to determine the mass of the W boson in an unbiased fashion. CDF physicist Ashutosh Kotwal, Duke University, unveiled the result to his CDF colleagues at an internal meeting on December 14, 2006. The CDF collaboration made the result public with a press release on January 8, 2007. 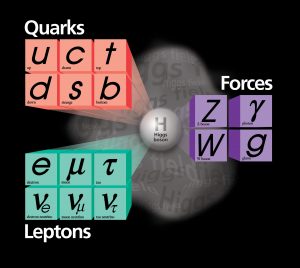 According to the Standard Model of particles and forces, the Higgs mechanism gives mass to particles. Measuring the mass of the top quark and the mass of the W boson, scientists can restrict the allowable mass range of the not-yet-observed Higgs boson. 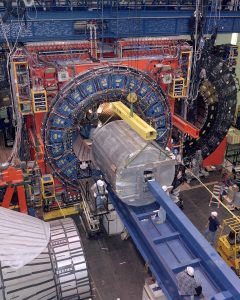 The CDF detector, about the size of a 3-story house, weighs about 6,000 tons. Its subsystems record the “debris” emerging from high-energy proton-antiproton collisions. The detector surrounds the collision point and records the path, energy and charge of the particles emerging from the collisions. This information can be used to determine, for example, the mass of the W boson, the carrier of the weak nuclear force and a key parameter of the Standard Model of particles and forces

The Fermilab accelerator complex accelerates protons and antiprotons close to the speed of light. The Tevatron, four miles in circumference, is the world’s most powerful proton-antiproton accelerator, producing collisions at the energy of 2 tera electron volts (TeV). Two experiments, CDF and DZero, record the particles emerging from billions of collisions per second. Each collision produces hundreds of particles.

Notes for editors:
Fermilab is a Department of Energy Office of Science national laboratory operated under contract by the Fermi Research Alliance, LLC. CDF is an international experiment of 700 physicists from 61 institutions and 13 countries. It is supported by the U.S. Department of Energy, the U.S. National Science Foundation and a number of international funding agencies (the full list can be found at http://www-cdf.fnal.gov/collaboration/Funding_Agencies.html). In 1995, the CDF and DZero experiments discovered the top quark, the final and most massive quark in the Standard Model.