Editor’s note: Members of the CDF collaboration will give a scientific presentation with details about their measurement on Friday, April 8, at 4 p.m. CDT. Click here for more information and registration. 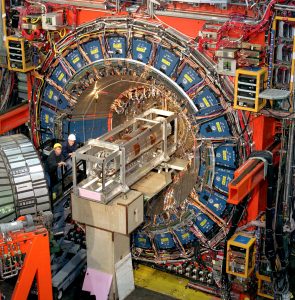 The Collider Detector at Fermilab recorded high-energy particle collisions produced by the Tevatron collider from 1985 to 2011. About 400 scientists at 54 institutions in 23 countries are still working on the wealth of data collected by the experiment. Photo: Fermilab

After 10 years of careful analysis and scrutiny, scientists of the CDF collaboration at the U.S. Department of Energy’s Fermi National Accelerator Laboratory announced today that they have achieved the most precise measurement to date of the mass of the W boson, one of nature’s force-carrying particles. Using data collected by the Collider Detector at Fermilab, or CDF, scientists have now determined the particle’s mass with a precision of 0.01% — twice as precise as the previous best measurement. It corresponds to measuring the weight of an 800-pound gorilla to 1.5 ounces.

The new precision measurement, published in the journal Science, allows scientists to test the Standard Model of particle physics, the theoretical framework that describes nature at its most fundamental level. The result: The new mass value shows tension with the value scientists obtain using experimental and theoretical inputs in the context of the Standard Model.

“The number of improvements and extra checking that went into our result is enormous,” said Ashutosh V. Kotwal of Duke University, who led this analysis and is one of the 400 scientists in the CDF collaboration. “We took into account our improved understanding of our particle detector as well as advances in the theoretical and experimental understanding of the W boson’s interactions with other particles. When we finally unveiled the result, we found that it differed from the Standard Model prediction.”

If confirmed, this measurement suggests the potential need for improvements to the Standard Model calculation or extensions to the model.

Scientists have now determined the mass of the W boson with a precision of 0.01%. This is twice as precise as the previous best measurement and shows tension with the Standard Model. 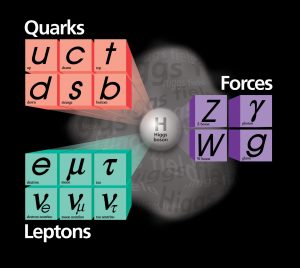 The W boson is the messenger particle of the weak nuclear force. It is responsible for the nuclear processes that make the sun shine and particles decay. CDF scientists are studying the properties of the W boson using data they collected at the Tevatron Collider at Fermilab.

The new value is in agreement with many previous W boson mass measurements, but there are also some disagreements. Future measurements will be needed to shed more light on the result.

“While this is an intriguing result, the measurement needs to be confirmed by another experiment before it can be interpreted fully,” said Fermilab Deputy Director Joe Lykken.

The W boson is a messenger particle of the weak nuclear force. It is responsible for the nuclear processes that make the sun shine and particles decay. Using high-energy particle collisions produced by the Tevatron collider at Fermilab, the CDF collaboration collected huge amounts of data containing W bosons from 1985 to 2011.

CDF physicist Chris Hays of the University of Oxford said, “The CDF measurement was performed over the course of many years, with the measured value hidden from the analyzers until the procedures were fully scrutinized. When we uncovered the value, it was a surprise.”

The mass of a W boson is about 80 times the mass of a proton, or approximately 80,000 MeV/c2. CDF researchers have worked on achieving increasingly more precise measurements of the W boson mass for more than 20 years. The central value and uncertainty of their latest mass measurement is 80,433 +/- 9 MeV/c2. This result uses the entire dataset collected from the Tevatron collider at Fermilab. It is based on the observation of 4.2 million W boson candidates, about four times the number used in the analysis the collaboration published in 2012. 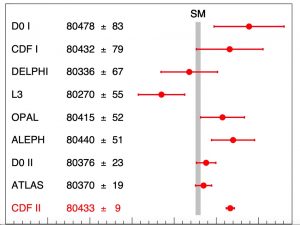 The mass of a W boson is about 80 times the mass of a proton, or approximately 80,000 MeV/c2. Scientists of the Collider Detector at Fermilab collaboration have achieved the world’s most precise measurement. The CDF value has a precision of 0.01 percent and is in agreement with many W boson mass measurements. It shows tension with the value expected based on the Standard Model of particle physics. The horizontal bars indicate the uncertainty of the measurements achieved by various experiments. The LHCb result was published after this paper was submitted and is 80354+- 32 MeV/c2. Image: CDF collaboration

“Many collider experiments have produced measurements of the W boson mass over the last 40 years,” said CDF co-spokesperson Giorgio Chiarelli, Italian National Institute for Nuclear Physics (INFN-Pisa). “These are challenging, complicated measurements, and they have achieved ever more precision. It took us many years to go through all the details and the needed checks. It is our most robust measurement to date, and the discrepancy between the measured and expected values persists.”

The collaboration also compared their result to the best value expected for the W boson mass using the Standard Model, which is 80,357 ± 6 MeV/c2. This value is based on complex Standard Model calculations that intricately link the mass of the W boson to the measurements of the masses of two other particles: the top quark, discovered at the Tevatron collider at Fermilab in 1995, and the Higgs boson, discovered at the Large Hadron Collider at CERN in 2012.

CDF co-spokesperson David Toback, Texas A&M University, stated the result is an important contribution to testing the accuracy of the Standard Model. “It’s now up to the theoretical physics community and other experiments to follow up on this and shed light on this mystery,” he added. “If the difference between the experimental and expected value is due to some kind of new particle or subatomic interaction, which is one of the possibilities, there’s a good chance it’s something that could be discovered in future experiments.”

To obtain a copy of the paper, please contact scipak@aaas.org.

The CDF collaboration comprises 400 scientists at 54 institutions in 23 countries.