Scientists working on the COUPP experiment at the Department of Energy’s Fermi National Accelerator Laboratory today (February 14) announced a new development in the quest to observe dark matter. The Chicagoland Observatory for Underground Particle Physics experiment tightened constraints on the “spin-dependent” properties of WIMPS, weakly interacting massive particles that are candidates for dark matter. Their results, combined with the findings of other dark matter searches, contradict the claims for the observation of such particles by the Dark Matter experiment (DAMA) in Italy and further restrict the hunting ground for physicists to track their dark matter quarry.

The COUPP experiment also proved that dusting off an old technology of particle physics, the bubble chamber, offers extraordinary potential as a tool in the search for dark matter.

“Our first results are extremely encouraging, and bubble-chamber technology is eminently scale-able,” said Juan Collar, a University of Chicago professor and spokesman of the COUPP collaboration, which includes 16 scientists and students from the University of Chicago; Indiana University South Bend; and DOE’s Fermilab. “We expect that COUPP will soon have a sweeping sensitivity to dark matter particles, simultaneously exploring both spin-dependent and spin-independent mechanisms for dark matter interaction. This is just one of the aspects that set our experiment apart from the competition.”

Physicists theorize that dark matter particles interact with ordinary matter via different mechanisms that are either dependent or independent of the nuclear spin of the atoms in the detector material.

Previous experiments had severely constrained the possibility that the DAMA observations result from dark matter spin-independent interactions. COUPP has now ruled out the last region of parameter space that allowed for a spin-dependent explanation. Several experiments worldwide, including DAMA itself, had been racing to prove or disprove DAMA’s initial claim to observe WIMPs. If the DAMA result had been due to spin-dependent WIMPs, then COUPP researchers should have found hundreds of WIMPs. They found none above background.

The COUPP collaboration details the results in a paper, “Improved Spin-Dependent WIMP Limits from a Bubble Chamber,” appearing in the February 15 issue of the journal Science.

WIMPs, if they exist, rarely interact with ordinary matter. COUPP uses a glass jar filled with about a liter of iodotrifluoromethane, a fire-extinguishing liquid known as CF3I, to detect a particle as it hits a nucleus, triggering evaporation of a small amount of CF3I. The resulting bubble initially is too small to see but it grows. Using digital cameras, COUPP scientists study the pictures of bubbles once they reach a millimeter in size. They look for statistical variations between photographs that signal whether bubbles were caused by background radiation or by dark matter.

“Eighty-five percent of the total matter of the universe still eludes direct detection,” said Dennis Kovar, acting associate director for high energy physics in the DOE Office of Science. “To discover the nature of dark matter will require both catching dark matter particles with innovative detectors like COUPP’s and making and studying dark matter at particle accelerators.”

The COUPP experiment is located 350 feet underground in a tunnel on the Fermilab site.

“To search for WIMPs, COUPP revived one of the oldest tools in particle physics: the bubble chamber. As other detector technology surpassed the bubble chamber in the past two decades, it became nearly extinct in high-energy physics laboratories,” said James Whitmore, NSF program manager. “Now it is making a comeback in one of the most exciting areas of particle physics, the search for dark matter.”

Other experiments, such as the Cryogenic Dark Matter Search at Fermilab, look for dark matter underground using a different technology.

“COUPP’s use of a bubble chamber is an intriguing technology. It has been improving its reach for spin-dependent research,” said Blas Cabrera, Stanford University professor and CDMS spokesman. “It is a valuable tool in the range of technology in the search for dark matter. It is important to have confirmation from radically different technologies.”

“COUPP is a new player in an extremely competitive arena, and it has already demonstrated it can contribute to the search for dark matter,” said Hugh Montgomery, Fermilab associate director for research. “Now they need to show whether or not they can take it to the next level.”

COUPP aims to increase sensitivity by increasing the amount of liquid from one liter to 30 liters in the bubble chamber. Physicists expect soon to start testing the larger chamber at Fermilab. If the larger chamber meets expectations, the experiment could move to a deeper tunnel to reduce the background from cosmic radiation even further.

“No one knows for sure if dark matter is made of WIMPs,” said Andrew Sonnenschein, COUPP collaborator. “If it is, we’ll have a chance with the new chamber to find it. That’s all we can ask for.”

The COUPP collaboration is funded by the National Science Foundation and the U.S. Department of Energy.

Fermilab is a Department of Energy Office of Science national laboratory operated under contract by the Fermi Research Alliance, LLC. The DOE Office of Science is the single largest supporter of basic research in the physical sciences in the nation.

The National Science Foundation is an independent federal agency that supports fundamental research and education across all fields of science and engineering. NSF funds reach all 50 states through grants to more than 1,700 universities and institutions. 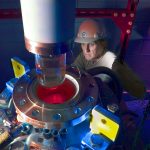 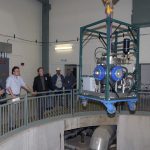 The COUPP collaboration lowered its bubble chamber into a tunnel on the Fermilab site on March 28, 2005. Moving the bubble chamber 350 feet underground significantly reduces the background due to cosmic rays. Credit: Fermilab 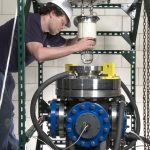 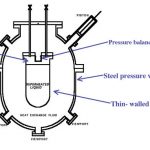 COUPP uses a glass jar filled with about a liter of iodotrifluoromethane, a fire-extinguishing liquid also known as CF3I. Credit: COUPP collaboration 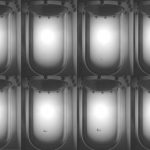 COUPP uses a glass jar filled with about a liter of iodotrifluoromethane, a fire-extinguishing liquid also known as CF3I. The jar is inside a pressure vessel that controls the formation of bubbles in the CF3I. After cameras have recorded a bubble, the chamber is compressed to collapse the bubble, then re-expanded to make it sensitive again for the next particle hitting a nucleus. Credit: COUPP collaboration 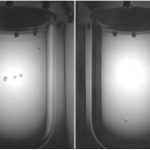 The left photo shows a sequence of bubbles created by multiple scattering of a neutron. WIMPs are expected to produce a single bubble as shown in the right photo. COUPP found no signals above background. Credit: COUPP collaboration.