The 50-foot-wide Muon g-2 electromagnet at rest inside the Fermilab building that will house the experiment. The magnet was moved into the new building on Wednesday, July 30, 2014. The magnet will allow scientists to precisely probe the properties of subatomic particles called muons. Photo: Fermilab.

One year ago, the 50-foot-wide Muon g-2 electromagnet arrived at the U.S. Department of Energy’s Fermi National Accelerator Laboratory in Illinois after traveling 3,200 miles over land and sea from Long Island, New York. This week, the magnet took the final few steps of that journey, moving across the Fermilab site and into the new building that now houses it.

The gigantic electromagnet is the centerpiece of Fermilab’s Muon g-2 experiment, which will investigate the properties of an elusive subatomic particle called the muon. Since its arrival at Fermilab on July 26, 2013, the magnet has been biding its time, waiting for the completion of the new building on site that will house the experiment.

That building was finished in April, and in a series of two moves over the past six days, the ring was transported across the Fermilab site and slowly pulled into place on huge metal tracks. A crowd of scientists and enthusiasts were on hand to cheer the magnet on, and applaud the next phase of muon physics at Fermilab.

“We’re all very excited to see this device move that last mile and be put in place,” said Chris Polly, project manager for the Muon g-2 experiment. “For those of us who have been working on this for years, it’s a great moment, and it brings us closer to taking data and having our questions answered.”

Muons are heavy cousins of electrons. The experiment will be used to study muons created in Fermilab’s particle accelerators. Muons “wobble” when placed in a magnetic field, and based on what we know about the universe, scientists have predicted the ultra-precise value of that wobble. The predecessor experiment using this magnet at Brookhaven National Laboratory in New York in the 1990s saw evidence for – though not definitive proof of – a departure from that expected value.

Scientists think that this deviation might be due to the presence of heavy, undiscovered particles or hidden subatomic forces.

Fermilab’s accelerator complex can generate a more intense and pure beam of muons, so the new experiment should be able to provide a definitive answer. Should the Muon g-2 experiment also see a deviation from the expected value, it could open the door to new mysteries of the universe.

The electromagnet was specifically designed for muon experiments like this one. To build a new one at Fermilab would have cost about $30 million, but transporting the ring from New York cost only $3 million.

“The arrival of the magnet one year ago, and the move to the newly completed building this week, are both testaments to the years of planning and work by the entire collaboration,” said David Hertzog, co-spokesperson for the Muon g-2 experiment. “It’s an important milestone, and cause for celebration.”

Once the ring is in place, it will take several months to set up the detectors for the experiment. Following that, the magnet will need to be shimmed to ensure the most precise measurement possible, and that process could take upwards of a year. The experiment is expected to start taking data in 2017.

Muon g-2 is the first of two muon experiments planned for Fermilab, both of which will enhance our knowledge about these fundamental particles. Both the Muon g-2 and the Muon-to-Electron (Mu2e) experiments were specifically recommended by the Particle Physics Project Prioritization Panel in its recent report, a document that serves as a road map for U.S. particle physics for the next 20 years. The P5 report was approved by the High Energy Physics Advisory Panel, which advises both the DOE and the National Science Foundation.

The Muon g-2 collaboration comprises 120 scientists from 26 institutions in six countries. For more information about the experiment, visit http://muon-g-2.fnal.gov. 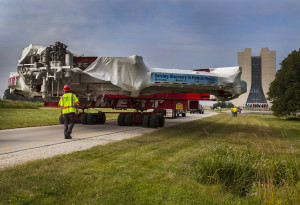 Exactly one year to the day after completing a 3,200-mile journey from Long Island, the 50-foot-wide Muon g-2 electromagnet was moved across the Fermilab site on Saturday, July 26 to the new building that will house the experiment. Photo: Fermilab. 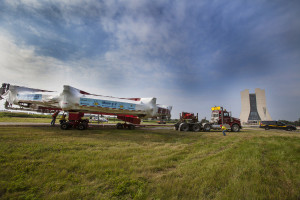 The Muon g-2 electromagnet being driven past Wilson Hall on the Fermilab site on the way to its new home. The magnet was moved to its new location on Saturday, July 26, after waiting for a year for its new building to be completed. Photo: Fermilab. 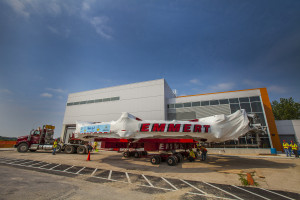 The 50-foot-wide Muon g-2 electromagnet at rest in front of the new building at Fermilab that will house the experiment. The new building was constructed over the past year, and the magnet moved to its new location on Saturday, July 26. Photo: Fermilab. 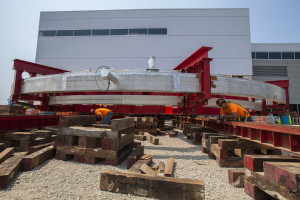 The Muon g-2 electromagnet, shorn of the white shrink wrap it wore for more than a year, sits outside the new building at Fermilab that will house the Muon g-2 experiment. The magnet was moved across the Fermilab site on Saturday, July 26, and into the building on Wednesday, July 30, 2014 . Photo: Fermilab. 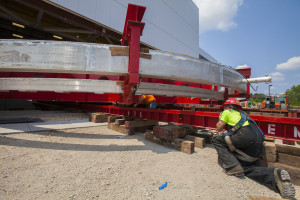 Workers slowly slide the 50-foot-wide Muon g-2 electromagnet inside the new building on the Fermilab site that will house the experiment. The magnet was moved into the building on Wednesday, July 30, 2014, while a crowd of scientists and onlookers watched. Photo: Fermilab.