The international Deep Underground Neutrino Experiment, or DUNE, hosted by Fermilab, will be huge. In fact, with more than 1,000 collaborators from over 30 countries and five continents, it’s the largest international science project ever hosted in the U.S.

To prepare for this massive endeavor, the particle physics community has been taking DUNE technologies for thorough test drives. Over the last decade, the particle detectors ICARUS, MicroBooNE and LArIAT at Fermilab and the ProtoDUNE detectors at CERN have all contributed in one way or another to compiling the deep background knowledge needed to build and operate DUNE, a neutrino detector that will use liquid argon and advanced electronics to capture the passage of the famously elusive particles.

In 2019, DUNE preparations entered a new stage as Fermilab established a new testing facility for DUNE detectors: The Integrated Cryostat and Electronics Built for Experimental Research Goals, or ICEBERG. 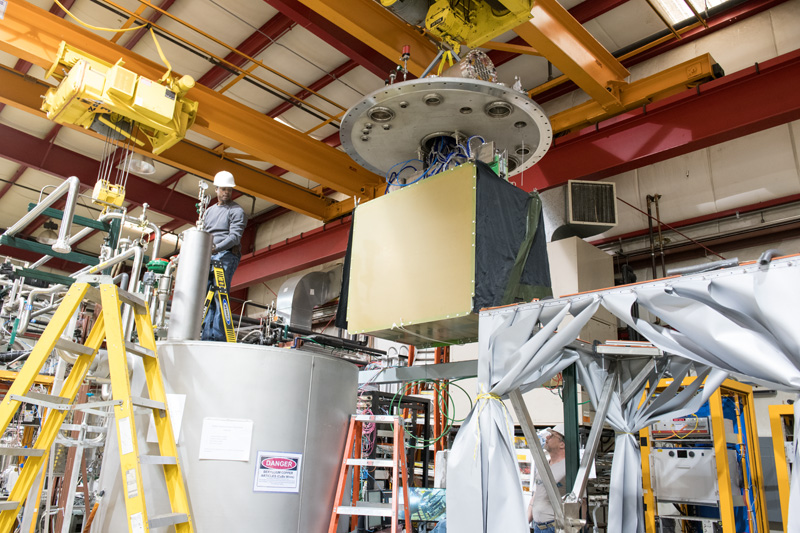 Fermilab’s ICEBERG particle detector is effectively a miniature version of component that tracks neutrinos in the international Deep Underground Neutrino Experiment, hosted by Fermilab. ICEBERG researchers confirm that the detector components for DUNE reach the specifications necessary for that experiment to be successful. Photo: Reidar Hahn, Fermilab

“DUNE’s primary goal is to measure and understand very particular properties of the neutrino, and ICEBERG is a facility where we can confirm that the detector components we’re designing reach the specifications necessary for DUNE to be successful,” said Rory Fitzpatrick, a graduate student at the University of Michigan working on ICEBERG’s photon detectors.

The most abundant matter particles in the universe, neutrinos provide a valuable testing ground for particle physics theories. They hardly interact with anything, and they oscillate between three different states as they travel.

Physics experiments such as DUNE make use of the properties of neutrinos to illuminate differences between matter and antimatter, perhaps explaining why the universe seems to be dominated by matter. Neutrinos may also teach us about the proton’s lifetime and black hole formations along the way.

Fermilab accelerators will shoot an underground beam of neutrino particles 800 miles through Earth’s crust — from Fermilab in Illinois to the Sanford Underground Research Facility in South Dakota. At each site, a detector will measure the composition of the beam and analyze how the particles have shape-shifted along their flight. Since neutrinos are so weakly interacting, the detectors have to be massive and ultrasensitive. They’re essentially giant tubs of liquid argon that get bombarded with the tiny particles. Occasionally, one of the neutrinos will interact with the argon and produce charged particles and photons, both of which are detected by various sensors in DUNE. The detector in ICEBERG is in effect a miniature version of the DUNE component that tracks these particles.

There’s no need to send highly elusive neutrinos to particle detectors while simply testing the functionality of the system. When stationed above ground, detectors can also pick up traces from cosmic rays — created when high-energy particles from outer space hit the atmosphere — much more consistently.

In many ways, ICEBERG is a crystal ball for DUNE — lending insight on its future obstacles and requirements.

The cosmic-ray signatures allow physicists to test the DUNE electronics above ground with charge-tracking and photon-detection systems. Plus, because the cosmic rays are abundant on Earth’s surface and easier to detect than neutrinos, the prototypes can be smaller and require much less precious argon.

The liquid argon used for ICEBERG would fill the bed of a pickup truck. DUNE, by comparison, requires enough argon to fill 12 Olympic-sized swimming pools. DUNE researchers are currently testing the second of several combinations of new and proven electronics with ICEBERG.

“The scientists, engineers and technical staff work together to find ways to continually improve the ICEBERG and keep all its support infrastructure running,” said Kelly Hardin, a Fermilab technician who works on all liquid-argon detectors at Fermilab.

Once this series of tests ends, the chosen electronics and photon sensors are expected to be tested in one of the ProtoDUNE detectors before being mass-produced for use in DUNE.

The process of operating and maintaining this and other prototype detectors gets scientists ready for the big league: DUNE. An international project of its magnitude requires rigorous assurance checks and thorough preparation.

“ICEBERG has given me a chance to get my hands dirty and turn some screws,” said Ivan Caro Terrazas, a graduate student at Colorado State University working on ICEBERG’s particle-tracking systems. “It amazes me how much coordination is required for a detector as small as ICEBERG, let alone DUNE itself.”

In many ways, ICEBERG is a crystal ball for DUNE — lending insight on its future obstacles and requirements.

“Even by running ICEBERG, a micro-DUNE, we’re learning a lot about what we’re going to need to build, operate and manage this massive detector,” Mishra said. “ICEBERG is a collaborative effort of laboratories and institutions around the globe. We rely on our diverse team to push through challenges and accomplish our goals.”

The ICEBERG program is supported by the Department of Energy Office of Science.