This is a version of an article originally published on Oct. 13 by the National Institute of Standards and Technology. 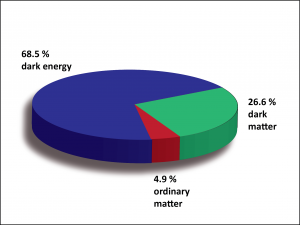 Visible matter makes up only a tiny amount of the composition of the universe. Dark energy, a mysterious entity that is accelerating the expansion of the universe, dominates, followed by dark matter, invisible material that exerts a gravitational tug.
Image: NIST

Researchers at the National Institute of Standards and Technology, or NIST, and their colleagues, including Fermilab scientists Dan Carney and Gordan Krnjaic, have proposed a novel method for finding dark matter, the cosmos’s mystery material that has eluded detection for decades. Dark matter makes up about 27% of the universe; ordinary matter, such as the stuff that builds stars and planets, accounts for just 5% of the cosmos. (A mysterious entity called dark energy, accounts for the other 68%.)

According to cosmologists, all the visible material in the universe is merely floating in a vast sea of dark matter — particles that are invisible but nonetheless have mass and exert a gravitational force. Dark matter’s gravity would provide the missing glue that keeps galaxies from falling apart and account for how matter clumped together to form the universe’s rich galactic tapestry.

The proposed experiment, in which a billion millimeter-sized pendulums would act as dark matter sensors, would be the first to hunt for dark matter solely through its gravitational interaction with visible matter. The experiment would be one of the few to search for dark matter particles with a mass as great as that of a grain of salt, a scale rarely explored and never studied by sensors capable of recording tiny gravitational forces.

Previous experiments have sought dark matter by looking for nongravitational signs of interactions between the invisible particles and certain kinds of ordinary matter. That’s been the case for searches for a hypothetical type of dark matter called the WIMP (weakly interacting massive particles), which was a leading candidate for the unseen material for more than two decades. Physicists looked for evidence that when WIMPs occasionally collide with chemical substances in a detector, they emit light or kick out electric charge.

Researchers hunting for WIMPs in this way have either come up empty-handed or garnered inconclusive results; the particles are too light (theorized to range in mass between that of an electron and a proton) to detect through their gravitational tug.

Dark matter, the hidden stuff of our universe, is notoriously difficult to detect. In search of direct evidence, NIST researchers and colleagues have proposed using a 3-D array of pendulums as force detectors, which could detect the gravitational influence of passing dark matter particles. When a dark matter particle is near a suspended pendulum, the pendulum should deflect slightly due to the attraction of both masses. However, this force is very small, and difficult to isolate from environmental noise that causes the pendulum to move. To better isolate the deflections from passing particles, NIST researchers propose using a pendulum array. Environmental noise affects each pendulum individually, causing them to move independently. However, particles passing through the array will produce correlated deflections of the pendulums. Because these movements are correlated, they can be isolated from the background noise, revealing how much force a particle delivers to each pendulum and the particle’s speed and direction, or velocity. Credit: Sean Kelley/NIST

With the search for WIMPs seemingly on its last legs, researchers at NIST and their colleagues are now considering a more direct method to look for dark matter particles that have a heftier mass and therefore wield a gravitational force large enough to be detected.

“Our proposal relies purely on the gravitational coupling, the only coupling we know for sure that exists between dark matter and ordinary luminous matter,” said study co-author Daniel Carney, a theoretical physicist jointly affiliated with NIST, the Joint Quantum Institute and the Joint Center for Quantum Information and Computer Science at the University of Maryland in College Park, and the Department of Energy’s Fermi National Accelerator Laboratory.

The researchers, who also include Jacob Taylor of NIST, JQI and QuICS; Sohitri Ghosh of JQI and QuICS; and Gordan Krnjaic of Fermi National Accelerator Laboratory, calculate that their method can search for dark matter particles with a minimum mass about half that of a grain of salt, or about a billion billion times the mass of a proton. The scientists reported their findings in Physical Review D.

Because the only unknown in the experiment is the mass of the dark matter particle, not how it couples to ordinary matter, “if someone builds the experiment we suggest, they either find dark matter or rule out all dark matter candidates over a wide range of possible masses,” Carney said.

The experiment would be sensitive to particles ranging from about 1/5,000 of a milligram to a few milligrams.

That mass scale is particularly interesting because it covers the so-called Planck mass, a quantity of mass determined solely by three fundamental constants of nature and equivalent to about 1/5,000 of a gram.

Carney, Taylor, Krnjaic and their colleagues propose two schemes for their gravitational dark matter experiment. Both involve tiny, millimeter-size mechanical devices acting as exquisitely sensitive gravitational detectors. The sensors would be cooled to temperatures just above absolute zero to minimize heat-related electrical noise and shielded from cosmic rays and other sources of radioactivity. In one scenario, a myriad of highly sensitive pendulums would each deflect slightly in response to the tug of a passing dark matter particle.

Similar devices (with much larger dimensions) have already been employed in the recent Nobel-Prize-winning detection of gravitational waves, ripples in the fabric of space-time predicted by Einstein’s theory of gravity. Carefully suspended mirrors, which act like pendulums, move less than the length of an atom in response to a passing gravitational wave.

In another strategy, the researchers propose using spheres levitated by a magnetic field or beads levitated by laser light. In this scheme, the levitation is switched off as the experiment begins, so that the spheres or beads are in free fall. The gravity of a passing dark matter particle would ever so slightly disturb the path of the free-falling objects.

“We are using the motion of objects as our signal,” said Taylor. “This is different from essentially every particle physics detector out there.”

The researchers calculate that an array of about a billion tiny mechanical sensors distributed over a cubic meter is required to differentiate a true dark matter particle from an ordinary particle or spurious random electrical signals or “noise” triggering a false alarm in the sensors. Ordinary subatomic particles such as neutrons (interacting through a nongravitational force) would stop dead in a single detector. In contrast, scientists expect a dark matter particle, whizzing past the array like a miniature asteroid, would gravitationally jiggle every detector in its path, one after the other.

To fabricate so many tiny sensors, the team suggests that researchers may want to borrow techniques that the smartphone and automotive industries already use to produce large numbers of mechanical detectors.

Thanks to the sensitivity of the individual detectors, researchers employing the technology needn’t confine themselves to the dark side. A smaller-scale version of the same experiment could detect the weak forces from distant seismic waves as well as that from the passage of ordinary subatomic particles, such as neutrinos and single, low-energy photons (particles of light).

The smaller-scale experiment could even hunt for dark matter particles — if they impart a large enough kick to the detectors through a nongravitational force, as some models predict, Carney said.

“We are setting the ambitious target of building a gravitational dark matter detector, but the R&D needed to achieve that would open the door for many other detection and metrology measurements,” Carney said.

Fermilab is supported by the U.S. Department of Energy’s Office of Science. The DOE Office of Science is the single largest supporter of basic research in the physical sciences in the United States and is working to address some of the most pressing challenges of our time. For more information, visit https://​ener​gy​.gov/​s​c​ience.