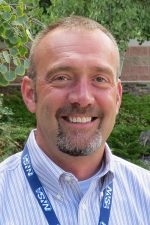 Verhaagen was most recently the deputy manager for technical operations at the DOE National Nuclear Security Administration Field Office at Los Alamos National Laboratory, following a period as NNSA senior technical safety advisor. As deputy manager, he led the federal team responsible for oversight of all laboratory operations, primarily focused on the nuclear and high-hazard facilities, as well as emergency management, engineering and operational readiness.

“I’m glad to be here, and I’m excited about learning a new scientific mission and working with a new group of people to get a different perspective on DOE science,” Verhaagen said.

As DOE Fermi Site Office manager and a liaison between the lab and the Office of Science, Verhaagen will collaborate with Fermilab to enable the lab’s mission, ensuring that the work is done safely and within Office of Science requirements.

Verhaagen has worked with DOE in some capacity for nearly 15 years. Before his time at NNSA, he worked for 10 years for the Defense Nuclear Facilities Safety Board, an independent agency in the federal executive branch that provides oversight of all DOE sites conducting work related to defense nuclear activities. His work there included a five-year period as resident inspector at Los Alamos National Laboratory.

Prior to this, Verhaagen worked for the U.S. Navy for 24 years, including 13 years as a submarine officer and eight as an electronics technician.

Verhaagen holds a bachelor’s and master’s degree in mathematics from Purdue University and a master’s in nuclear engineering from Pennsylvania State University.

He looks forward to being closer to family, who live in the area, and going to Wisconsin in the summers.

“Fermilab is a true science lab – science for the sake of science,” he said. “This is an opportunity to focus less on production, like I’m accustomed to, and more on the exciting fundamental research Fermilab is known for.”