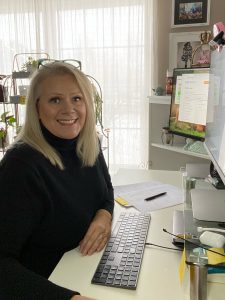 As the DUNE collaboration coordinator, what does your job entail?

What doesn’t it entail? I’m a central point of contact for the international collaboration for DUNE — the Deep Underground Neutrino Experiment — including the spokespeople and management. I do a lot of different things, including organizing meetings of all kinds: collaboration meetings, executive boards — any kind of board, any kind of committee. I take meeting minutes. We don’t have a large administrative staff for DUNE; I’m the only person. When somebody needs something, they’ll reach out to me. I’m there to help.

How long have you been with Fermilab?

My 30-year anniversary is in February. I was hired into the Fermilab directorate when John Peoples was director. I started off as the receptionist in the director’s office. At that time, I didn’t even have a computer.

How did you get from there to DUNE?

I moved to the Project Office for the building of the Main Injector accelerator in the early 1990s, and I realized that I love project work. I love seeing something go from beginning to turning on and all that goes into it, all the people that it takes.

I’ve moved around to various projects over the years. When I moved to the lab’s Particle Physics Division, I worked on the Cryogenic Dark Matter Search. I then worked with the Global Design Effort for the International Linear Collider for 15 years and stepped away from that just this year after working on it part-time for the last five years. And then in April 2015, I was asked to join DUNE, which is absolutely the right place for me.

It sounds like something everybody says, but I love working with such a diverse collaboration. We have over 1,000 people from 32 countries working on DUNE, and I interact with a lot of those people. I learn from them, and I’m hoping they’re learning from me. I like being part of the behind-the-scenes work and doing what I can to make my spokespeople’s jobs — not simpler, because it’s not a simple job — but easier.

What’s something you wish more people understood about your job?

When people think about someone working at Fermilab, immediately the scientists come to mind. But it’s not just scientists at the lab doing experiments. I think it’s really important to know that science happens because of all the people that are playing roles other than scientific roles, people like the administrative and finance and procurement people. While the scientists are doing an awesome job, their job is not possible without all those other people. The whole family of Fermilab is what makes these projects work.

I love to garden. It’s my favorite thing. I’m a flowers person; I grow perennials. I like my garden to bloom from early spring all the way to fall. It’s just very relaxing after you spend a day in your office, on your keyboard or at your computer. It feels good to walk away from something so technical and stick your hands in the dirt.

I also absolutely love true-crime podcasts. It seems to be something everybody’s doing now, but I’ve been a fan this whole time. I loved true crime before it was cool to love true crime. The gardening and the true crime are not related, though. I don’t garden to figure out where to bury the bodies.

DUNE is supported by the Department of Energy Office of Science.