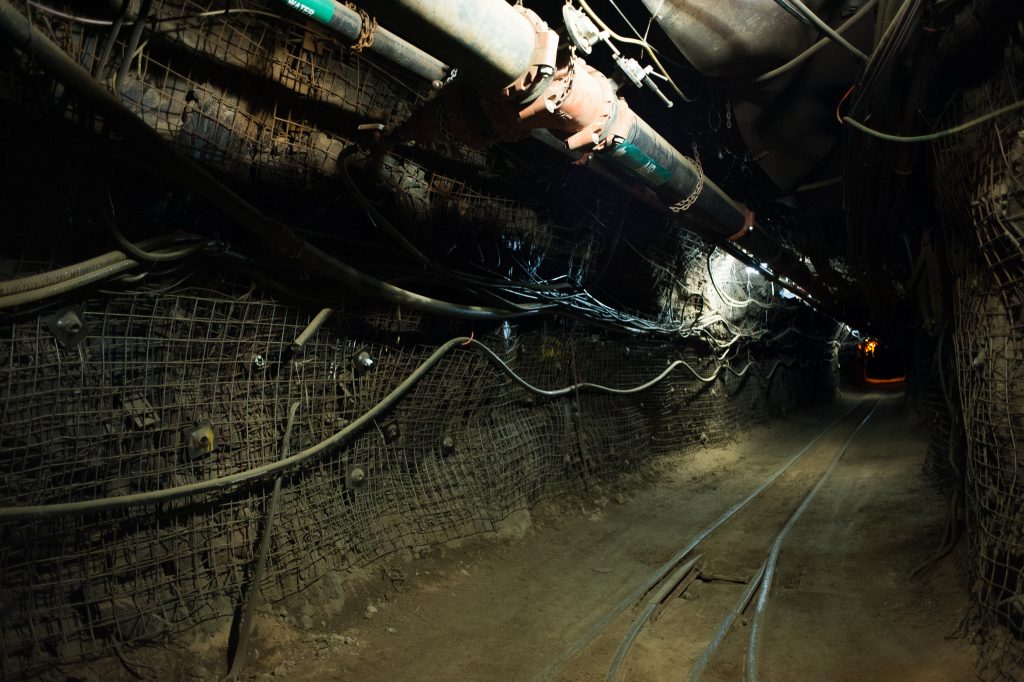 To get to SNOLAB’s cleanroom, where the SENSEI experiment is to be housed, a trip more than a mile underground inside a working mine, pictured here, is required. Photo: SNOLAB

In the search for dark matter particles, a tabletop experiment in the heart of a Canadian mine might do the trick. The SENSEI collaboration uses skipper charged-couple devices, or CCDs, which are the most sensitive sensors of their kind, dreamt up decades ago and only recently realized.

With the COVID-19 pandemic and the closure of the U.S.-Canada border, the experiment could have easily fallen behind schedule in 2020. Instead, it’s in its commissioning phase — testing with about 20% of the target material the experiment will use when the outer layers of shielding are in place. Extraordinary teamwork between physicists on both sides of the border ensured that it moved forward on schedule.

As the pandemic settled in for its third or fourth month, it dawned on Javier Tiffenberg, associate scientist at Fermilab and SENSEI collaborator, that the Fermilab team’s planned experimental installation, slated to begin in 2020, needed rethinking.

Without a way to get to the site, the SENSEI team reached out to SNOLAB to see if staff were open to installing the hyper-sensitive experiment themselves with remote guidance from Fermilab. SNOLAB staff are already familiar with the unique challenges of installing experiments in a clean lab located in a working mine. This time, they’d be performing a weeks-long installation for an experiment they weren’t originally going to be a part of.

“We will be their hands since they can’t be here,” Silvia Scorza, research scientist at SNOLAB, said of the perspective adopted for the project. She’s one of the SNOLAB employees who’ve taken on helping install projects remotely during the pandemic.

“When the people at SNOLAB said they were interested in contributing to this and then from our side the engineers and technicians said, ‘Yeah, we can do this,’ I was super excited because I really thought that this was coming together,” Tiffenberg said.

Greg Derylo, an engineer in the Particle Physics Division at Fermilab, designed the layout of SENSEI, worked with the drafting group to make drawings of all the mechanical parts, and procured parts from on- and off-site machine shops. Because of COVID-19 restrictions’ effects on access to Fermilab’s campus, he also did most of the physical assembly of the experiment.

Derylo said disassembling at Fermilab and re-assembling at SNOLAB was always part of the plan. But remote installation presented a new issue.

“The real trick comes in terms of who is doing that assembly underground,” he said. The main concern was handling the fragile (and expensive) skipper CCDs, which are “very susceptible to electrostatic damage.” Less than what a person can feel in their hand after rubbing their feet on carpet and touching a doorknob could wreck the sensors. So, the SNOLAB physicists and technicians took a special class in electronics handling.

Before the experiment could be put in SNOLAB’s hands, it had to be tested and documented.

“We tested everything at Fermilab. We assembled everything in the same way as they would do it there,” Derylo said.

The first test was mechanical — putting together the outside shell of the experiment to confirm it would hold vacuum — and a thermal performance test. SENSEI relies on cryogenics to “run cold.” To do this, the Fermilab team put on extra instrumentation to monitor temperatures and run diagnostics. Both performed as expected.

In early fall 2020, the Fermilab team installed a set of test modules into the experiment, turned it on, cooled it down, ran it cold, and operated the modules. The readout went off without a hitch. The team celebrated — each member from their own location via Zoom — with champagne.

Usually, the documentation is more a series of reminders than detailed instructions, and team members can intuit the process or rely largely on memory.

Because the team knew the installation would be remote, they took advantage of their own assembly during testing. 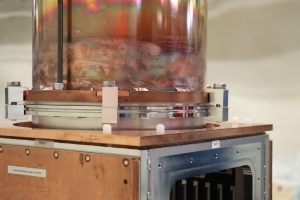 Fermilab engineer Greg Derylo’s labels are visible on SENSEI. Derylo added the labels to aid with documentation when he realized different team members had different definitions of front and back for the experiment. Photo: SNOLAB

“We took pictures of everything,” Tiffenberg said. “Having that documentation was critical.”

But coming up with it wasn’t without challenges. With multiple people documenting at different times due to the pandemic, communication within the in-group also became more important than usual. Different technicians had different perspectives — literally.

“As it turns out, we actually had opposite definitions of what was the front of the setup,” Derylo said. The remedy?  SENSEI’s newest and one of its most important components: stick-on labels.

The team also built stop points into the documentation. Once a SNOLAB pair reached one of these points, they could determine whether they had time to proceed to the next step in a shift or if they needed clarification from the Fermilab team.

The first draft was ready around the beginning of 2021. Derylo said the documentation was broken into different sections and wound up being around 70 pages. The document is akin to an outline “peppered heavily with photos.” Schematics for the vacuum system, the cooler system and electrical cabling were also provided, but weren’t part of the booklet.

“Then we took it apart but tried to keep as many pieces together as possible, and then we shipped this to SNOLAB in January,” Tiffenberg said.

An ultraclean cleanroom in a working mine

Pandemic issues aside, the process for installing experiments at SNOLAB’s underground facility was always complex. After all, it’s a clean lab that’s located more than a mile underground — inside a working mine.

“Careful planning and preparation start at the surface,” Scorza said.

There, at the beginning of the day, physicists, engineers and technicians dressed like miners (plus masks and contact tracing badges for the pandemic) wait for “the cage,” a mining elevator to take them deep underground.

The trip down takes less than five minutes. But then there is a journey that’s almost a mile through a mine tunnel with a rail track running along it.

“So, watch your step,” Scorza said. 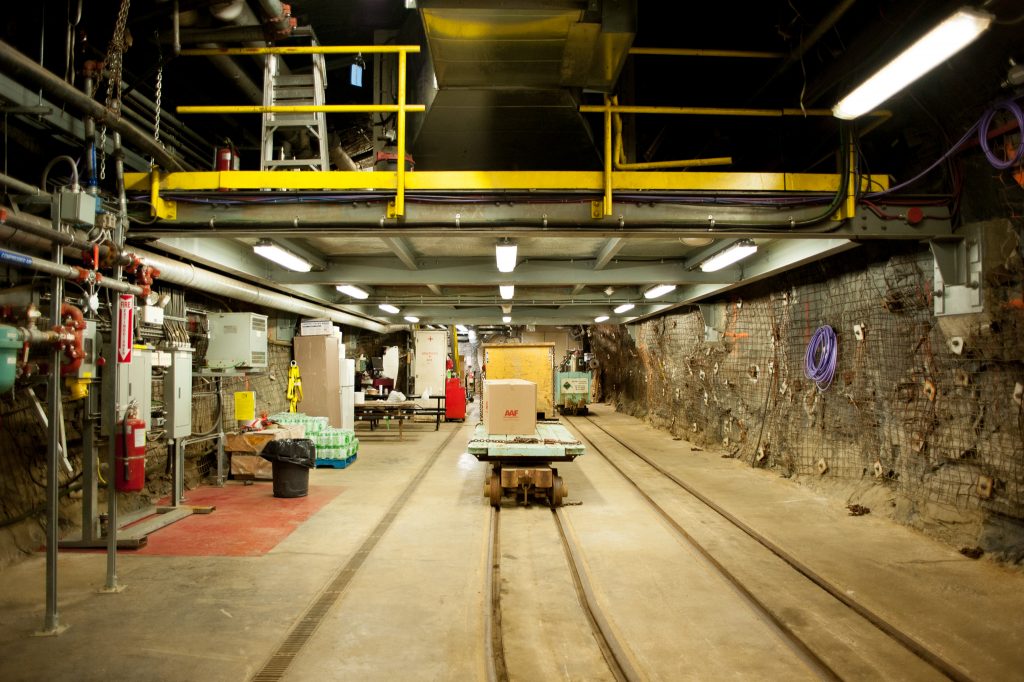 Entrance to the lab underground, looking towards the dirty side of the carwash: Every person who enters the lab on the other side must shower and change clothes. Every item that goes into the lab must go through the carwash. Photo: SNOLAB

At the end of this trek, a clean lab. Before entering, boots are washed at a special station. Clothes and boots are left on one side. People entering the clean lab strip, shower and dress with new clean garments on the other side of the shower to avoid contamination. A “lab responsible coordinator” checks that the lab is cleared for work — checking oxygen levels, among other parameters. It’s about an hour from the surface to beginning work, and the same — minus the shower — on the way back up. In a 10-hour day, this leaves about eight hours per shift to assemble the experiment.

A team of four, comprised of SNOLAB scientists and a technician, take turns and work in pairs to install. (No one can be alone underground, and there are restrictions on the maximum number of people to maintain physical distancing.)

Every piece received must go through “the underground carwash,” Scorza said. Each item is triple-bagged and double-palleted to streamline the intricate process for unbagging and wiping materials before they can enter the cleanroom laboratory. On the other side of the carwash, the clean lab. For SENSEI, parts included pipe, cable, vessel, copper pieces for the inner side, cryogenics, layers of lead and copper shielding, and the bell jar. 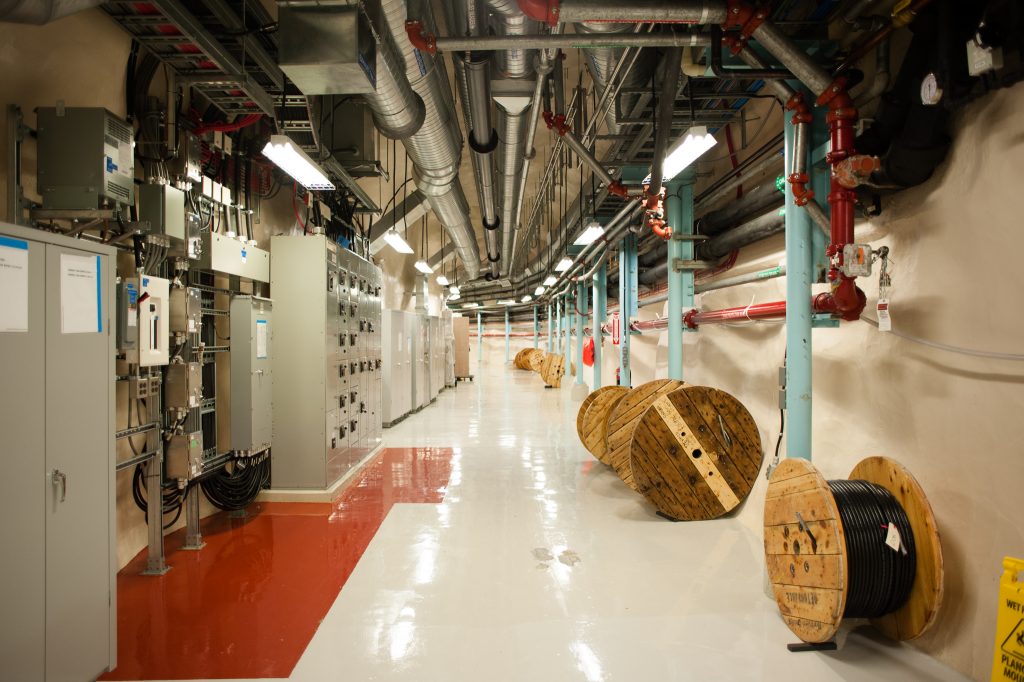 In stark contrast from the mine, on the other side of the carwash is the lab itself, an ultra clean facility. Photo: SNOLAB

“When these things were designed, of course, shipping everything assembled was not in the requirement list,” Tiffenberg said. “For the vast majority of things that we shipped, everything was perfectly fine.”

Only a few minor plastic pieces — easily replaceable — got loose and broke.

Once everything was opened and “looked good,” Tiffenberg said it was a “big, big relief.”

Installation began April 19 and was completed in late summer.

Though SNOLAB’s cleanroom is equipped with phones and Wi-Fi, communication outside of the documentation happens mainly in weekly meetings. The plan shifted from week to week, depending on whether the team could make it underground because of availability and COVID restrictions.

Some days it involved extreme care: touching those skipper CCDs. Others, it involved operating a crane to move lead shielding. Scorza said the mixture of work SNOLAB allows scientists to undertake — hands-on and analytical — gives them a more complete experience in experimental physics. “And, this is very fun. At least for me.” 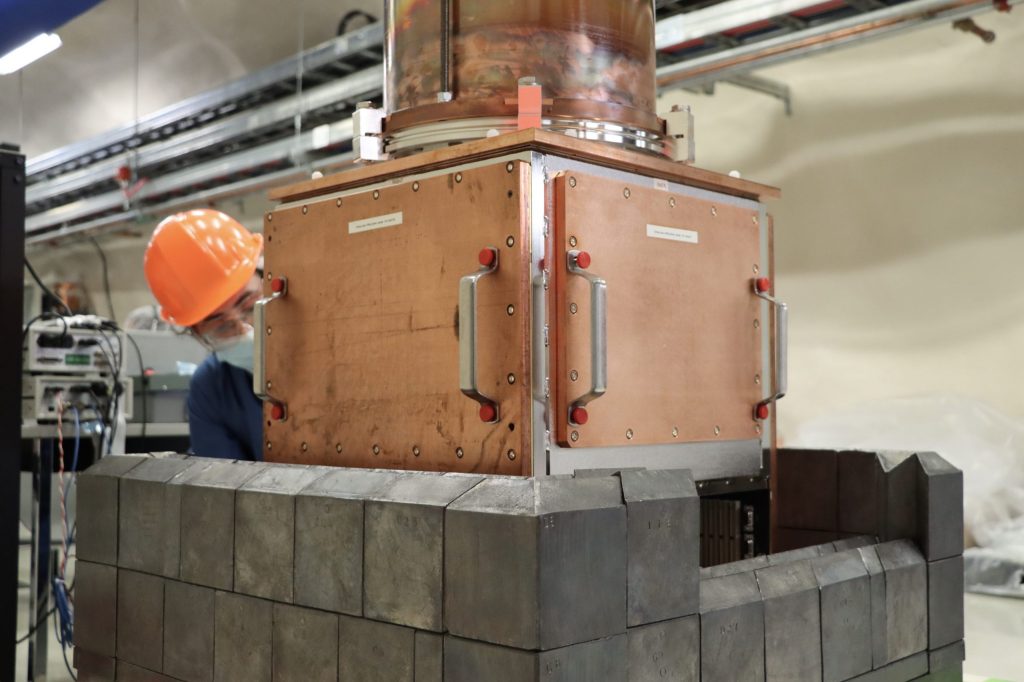 On Aug. 6, Steve Linden, a research scientist at SNOLAB, continues to assemble SENSEI in the underground cleanroom. Photo: SNOLAB

“I believe the fact that a team, a SNOLAB team of scientists, not originally very involved with the experiment, is able to progress with the underground installation shows that, first of all, physicists are very flexible,” Scorza said. “And (it’s) a testament to how robust the plan for this experiment is. Chapeau to the Fermilab team.”

Tiffenberg said he is grateful that the installation went by without any hiccups or surprises.

“It took a long time to get to this situation in which there are no surprises. At the beginning, everything felt, ‘Okay, we are spending a lot of time adjusting, coordinating, reviewing stuff.’ And that took a long time. But now that things are moving, that time that we took there we appreciate, because now everything is surprise-free.”

Though now that the experiment is taking data, a surprise in the form of a scientific discovery would be a nice reward.