On Dec. 10, U.S. Secretary of Energy Jennifer Granholm visited the Department of Energy’s Fermi National Accelerator Laboratory. She learned first-hand from the lab’s experts about the many ways Fermilab is advancing particle detector and accelerator technology for basic research to unlock the mysteries of the universe—and how those technologies can be applied to solve problems beyond physics. Granholm was accompanied by Gov. J. B. Pritzker, Sen. Dick Durbin and Reps. Lauren Underwood, Bill Foster, Sean Casten, Marie Newman and Bobby Rush. 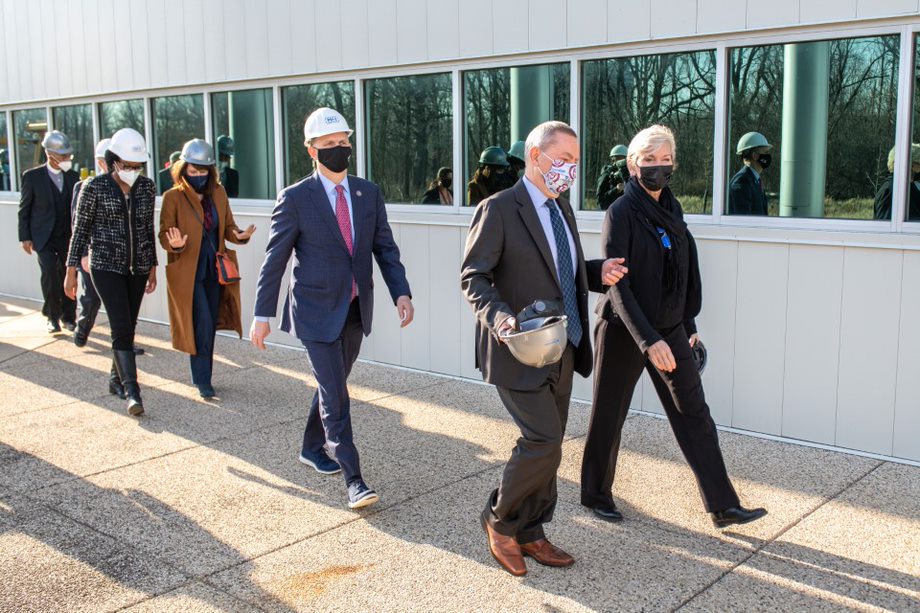 “The 17 national labs are really the Crown Jewels of the science ecosystem in the United States,” said Granholm. “The staff at Fermilab are doing incredible things—particularly with accelerator technology—to advance our understanding of matter, space, time and, of course, energy.”

Throughout the Secretary’s visit to Fermilab, she also heard many examples of how the lab is helping to enable a clean-energy infrastructure for discovery science, build a diverse workforce and talent pipeline, and inspire the next generation on what it means to work in science. 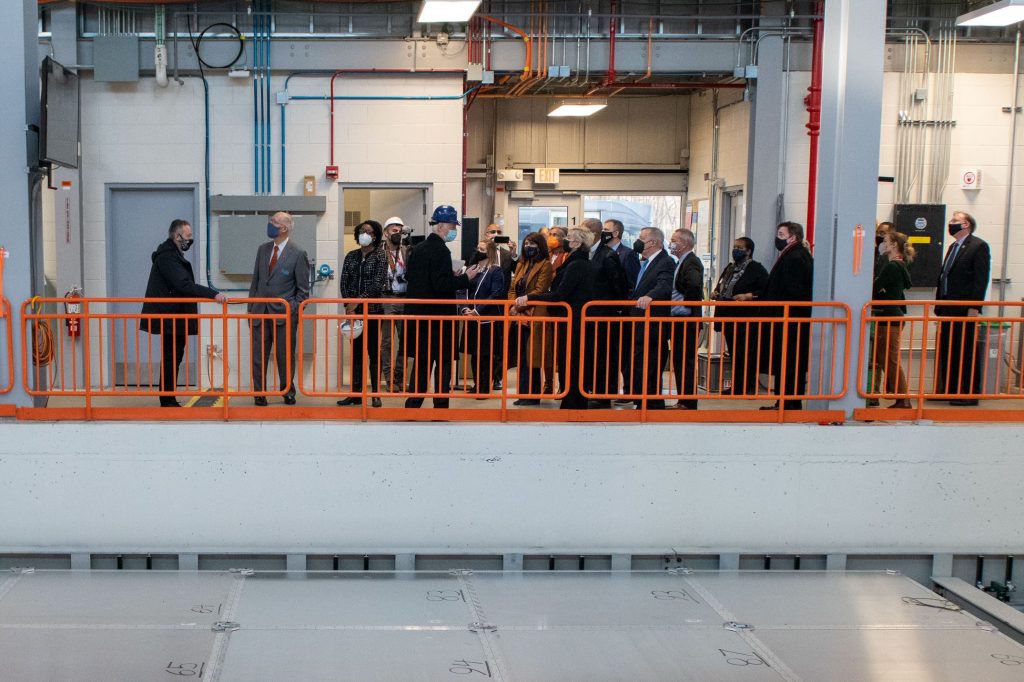 Granholm began her visit in discussion with experts on the international Deep Underground Neutrino Experiment hosted at Fermilab. DUNE brings together more than 1,400 researchers from over 200 institutions in 36 countries to study and better understand a key fundamental particle. Neutrinos could help explain some of the big remaining questions in physics, including why the universe is full of matter rather than nothing at all.

To study neutrinos, researchers are building the world’s largest neutrino detectors based on advanced liquid-argon technology. The detectors will give scientists detailed pictures of neutrino interactions. Construction crews are currently creating the space for the massive detectors one mile underground at the Sanford Underground Research Facility in South Dakota.

“It never ceases to amaze me that we have to build some of the largest detectors ever imagined to study one of the smallest things ever discovered,” said Chris Mossey, Fermilab deputy director for the LBNF/DUNE-US project. “Fermilab is a global leader in neutrino physics. Together with our international partners we’re poised to revolutionize our understanding of these particles.”

DUNE will use the world’s most intense neutrino beam, generated at Fermilab, to study these minuscule particles. An essential component is PIP-II, an ambitious upgrade to the lab’s particle accelerator complex that includes the construction of a new, leading-edge superconducting linear accelerator. PIP-II is the first particle accelerator built in the United States with significant contributions from international partners. 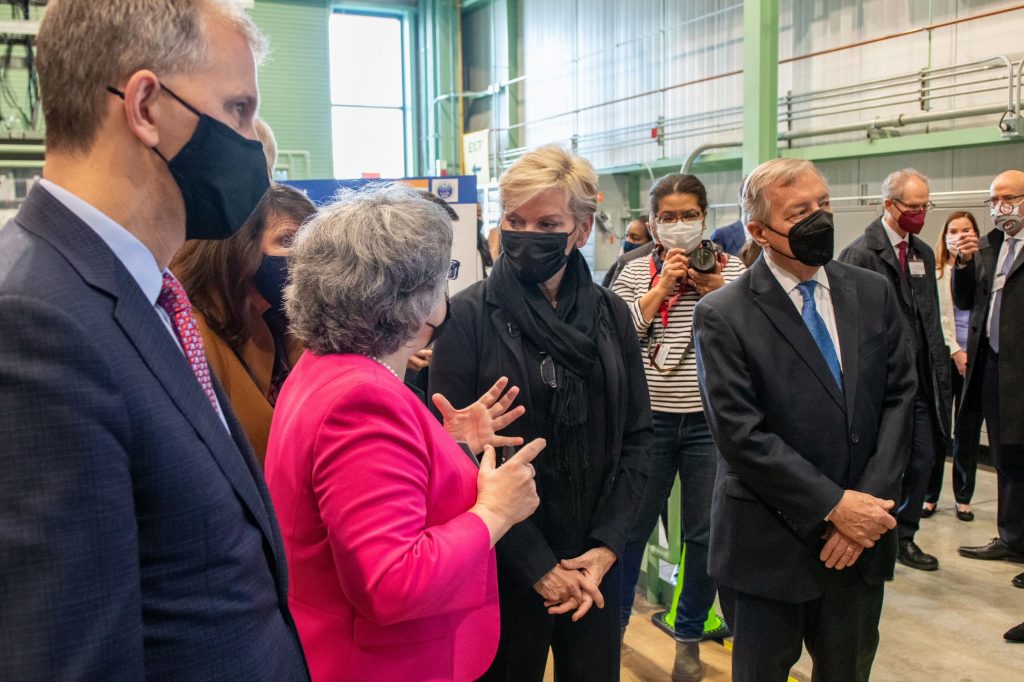 “There are only a handful of places in the world where we can perform sophisticated high-energy physics experiments, and Fermilab is one of them,” said Lia Merminga, the project director for PIP-II. Photo: Ryan Postel, Fermilab

During the tour, the secretary saw the PIP-II cryoplant building currently under construction and visited the Cryomodule Test Facility and assembly areas. PIP-II will use the latest advances in superconducting radio-frequency technologies to create a powerful proton beam traveling near the speed of light that can be tailored to power a diverse suite of experiments.

“There are only a handful of places in the world where we can perform sophisticated high-energy physics experiments, and Fermilab is one of them,” said Lia Merminga, the project director for PIP-II. “By working together with partners from around the world, we are building the equipment and sustainable infrastructure that will responsibly power the next 50 years of discovery and maintain Fermilab’s leadership as one of the world’s pre-eminent particle physics labs.”

Granholm also visited the Fermilab-hosted Superconducting Quantum Materials and Systems Center, one of five national quantum research centers chosen by the Department of Energy in 2020. The SQMS Center brings together experts from DOE national laboratories, industry and academia to make transformational advances in quantum information science. The center has 20 partners, including Rigetti Computing, Northwestern University, Ames Laboratory, NASA and the Italian National Institute for Nuclear Physics. 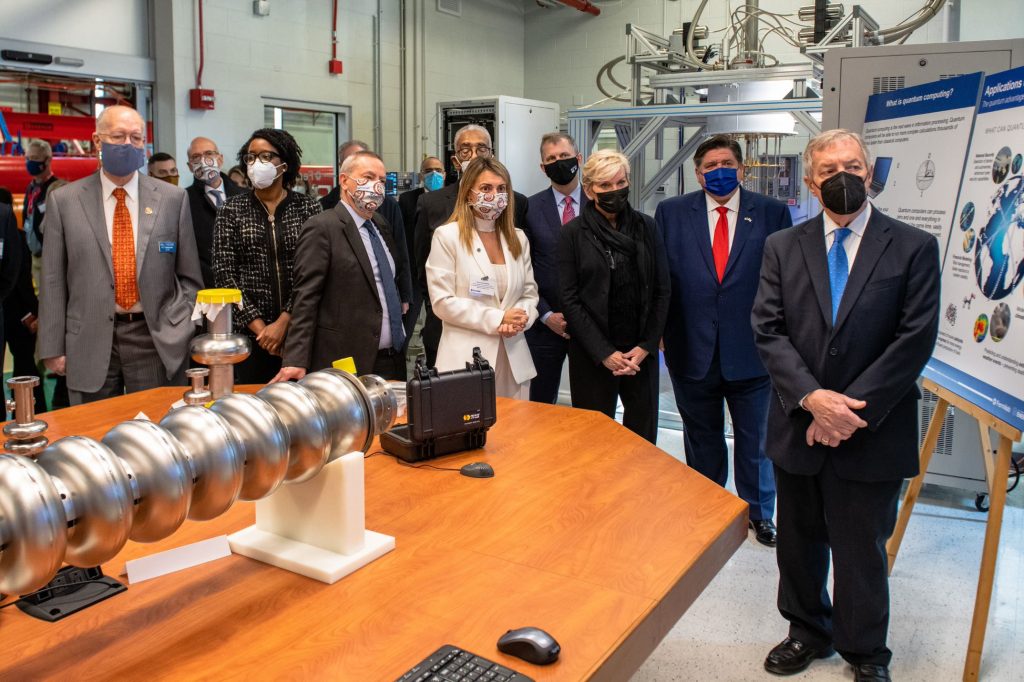 “With the Fermilab facilities and expertise in superconducting technology and cryogenics, SQMS will play a crucial role in advancing commercial quantum processors. Together with our partners, we will develop and deploy the first quantum computer prototype here at Fermilab,” said SQMS Center Director Anna Grassellino. “These quantum computers will solve important problems for science and society, with applications ranging from gaining a deeper understanding of dark matter and the subatomic world to national security, weather modeling, traffic optimization, pharmaceutical development, and finance.”

The Secretary’s tour ended with a demonstration of additional emerging technologies, including “AI on a chip,” a way to effectively process data at the source and a key enabler for a green revolution in computing. While working to make experiments more efficient, Fermilab is also investing in infrastructure improvements to make the site more efficient and sustainable. Initiatives include energy-efficient buildings, integrating renewable energy into micro- and nano-grids and exploring solar energy capabilities to support PIP-II. 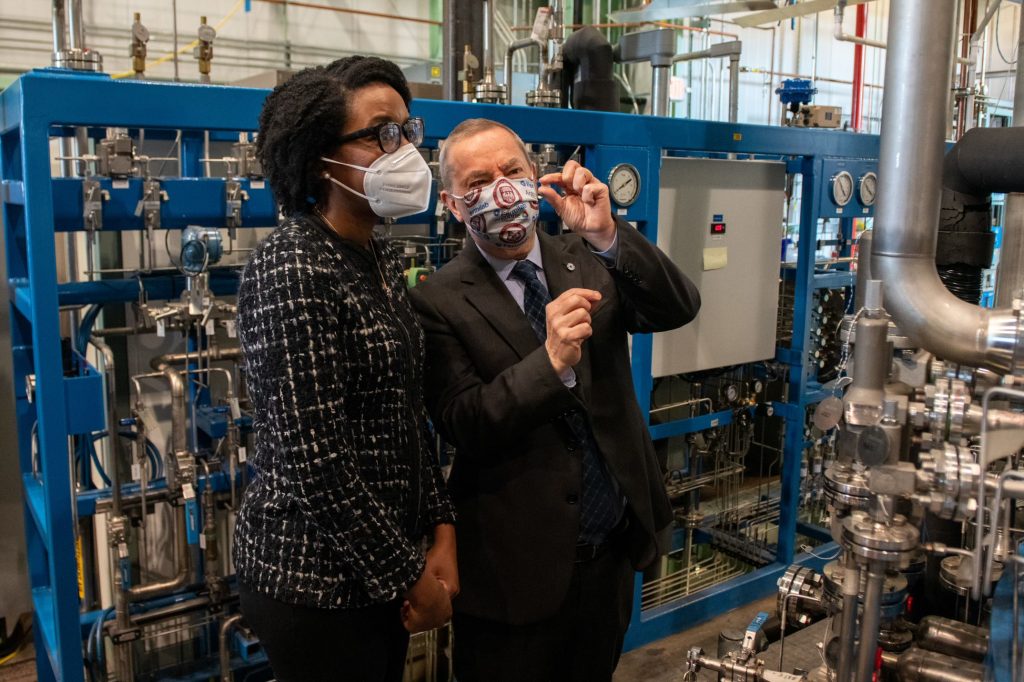 Improvements to the Fermilab site and technological advances in quantum science, scientific computing, accelerator and detector technology and data analysis will support the suite of experiments coming online or releasing new results in the coming years.

“With support from the Department of Energy, we’re pushing the technologies and the techniques underlying our research to new heights, for the benefit of humanity,” said Fermilab Director Nigel Lockyer. “International collaboration, hard work and ingenuity will lead to discoveries and applications we can’t even imagine today.”