Researchers at the U.S. Department of Energy’s Fermi National Accelerator Laboratory and their collaborators have identified a new type of nanostructural imperfection that impacts superconducting qubits, the building blocks of quantum computers.

Fermilab’s Alexander Romanenko and his colleagues describe the origin of the performance-limiting materials, known as nanohydrides, in a paper posted Aug. 23, 2021, on the arXiv.org e-Print archive.

Identifying the new precipitant and understanding what causes it provides an important step toward finding a solution and improving the qubits’ performance. One of the main opportunities to improve superconducting qubits is through extended coherence times—how long they can store quantum information.

Currently, superconducting transmon qubits can maintain coherence from between a few microseconds up to hundreds of microseconds. Nanohydride formation has now been identified as one of the factors that contribute to short coherence times. 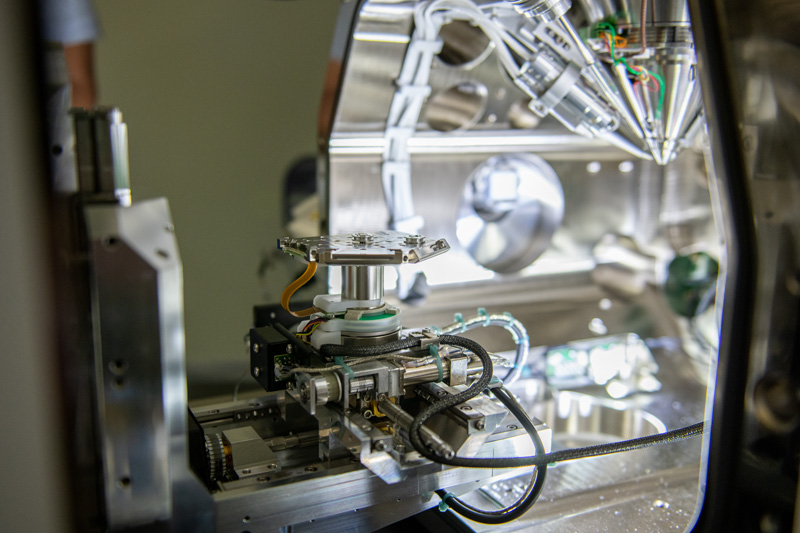 The focused ion beam instrument is a tool used to look at the surface of superconducting qubit devices and prepare thin lamellas of specific regions of the device for transmission electron microscopy analysis. Photo: Ryan Postel, Fermilab

“Now we can start to understand how these defects occur,” said Matt Reagor, director of engineering at Rigetti Computing and a co-author of the paper. “We can start to engineer them out of our systems.”

The Fermilab SQMS group discovered the evidence of this nanoscale imperfection during microscopic examinations of quantum materials conducted at ultracold temperatures. The test samples involved were qubits produced by Rigetti Computing, a leading startup building quantum computers with superconductors.

“We want these devices to act as a perfect mirror for single photons to bounce indefinitely—but foreign precipitants can act as traps where the photon can disappear,” said Anna Grassellino, director of the Fermilab-hosted SQMS Center. “Our primary goal with the SQMS Center is to identify these traps and eliminate them from the start.”

The new technological discovery is a variant of Q-disease—a strong degradation of cavity performance, which SRF scientists discovered several decades ago in niobium superconducting radio-frequency cavities built for particle accelerators. In those cavities, bulk inclusion of hydrogen in the niobium gave rise to large hydride precipitants upon cooldown to cryogenic temperatures. High-temperature heat treatments of niobium SRF cavities, also known as degassing, has become a standard way to control this hydride formation.

A few years ago, the Fermilab SRF team discovered a much smaller version of precipitant, called nanohydrides, forming in niobium SRF cavities even after applying high-temperature treatments. These precipitants are non-superconducting and cause performance degradation in the niobium resonators.

“The presence of hydrogen affects niobium in qubits the way it does in niobium SRF cavities,” said Romanenko, Fermilab’s chief technology officer. “This is why we decided to apply for the first time, cryogenic microscopy techniques to study superconducting qubits. We need to investigate the quantum devices’ nanostructure at the temperature at which they operate.”

When exposed to hydrogen or hydrogen-containing compounds, niobium absorbs them like a sponge. The niobium has an oxide coating that provides only limited protection from hydrogen absorption. “Often with the treatments employed in the fabrication of these devices, we remove this oxide,” explained Grassellino. “The naked surface niobium likes to absorb hydrogen.”

Now physicists know that even tiny quantities of hydrogen can also afflict qubits with hydrides, but of nanoscopic size. Eliminating the hydrogen gas from qubit treatment processes can help. Nevertheless, traces of the element remain within the niobium, like sugar dissolved in a cup of coffee.

Microscopic measurements taken of a superconducting qubit show that, when cooled to cryogenic temperatures, nano-sized particulates of a niobium hydride compound appear within the niobium grains. These hydrides have poor superconducting properties compared to niobium so they possibly can contribute to the decoherence of qubits. Image A shows a diffraction pattern taken from the niobium hydride precipitate, which confirms their existence in niobium grains, and the distribution of these precipitates is detailed in B and C. Photo: SQMS Center

It may be possible to identify what steps in the treatment processes expose niobium to hydrogen and then try to eliminate them. Even so, Romanenko cautioned, “Full elimination of hydrogen may not even be possible.” Romanenko, who specializes in niobium SRF cavities, more recently has worked to adapt accelerator cavities as 3D devices to store quantum information when combined with 2D qubits like Rigetti’s.

At room temperature, hydrogen exists as a gas moving fluidly throughout the niobium metal and creates no problems. But when cooled to 160 K (negative 171.7 degrees Fahrenheit), hydrogen bonds with the niobium and so niobium hydrides begin to grow. The more hydrogen the niobium absorbs, the larger the hydrides and vice versa.

Repeated tests have shown that hydrides form within minutes of cooling to temperatures of between about 80 K to 200 K (negative 316 to negative 100 degrees Fahrenheit).

“Then as the temperature drops below 77 K, hydrogen becomes almost frozen in place, and hydride formation stops,” said Romanenko. 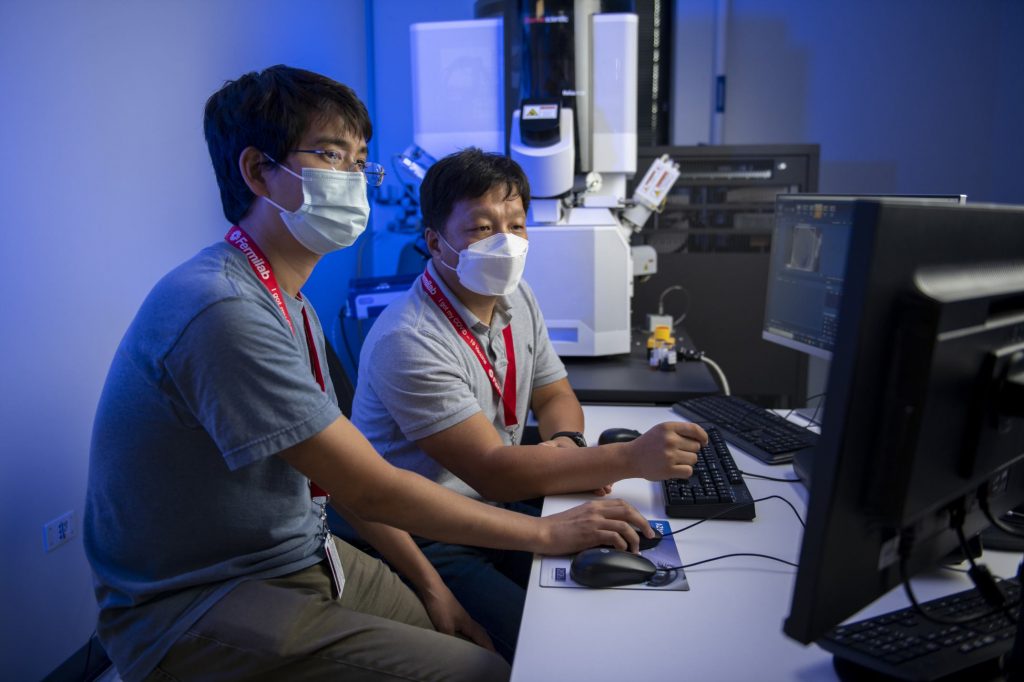 The normal heat-up, cool-down cycle common to quantum computer operations further affects nanohydride formation, but in different ways. “It’s changing the precipitation of these hydrides,” explained Romanenko. “You form these objects once when you cool down. You warm up and they disappear, but they leave behind some sort of disrupted surface. You cool down again, they form in a slightly different way.”

Fermilab and the SQMS collaboration already wield some of the most advanced tools for conducting microscopy at ultracold temperatures. SQMS also is working to establish new nanofabrication tools and facilities that will exceed today’s state-of-the-art capabilities. These tools will be specifically equipped to study and solve challenging problems, like the new nanoscale variant of Q-disease.

“From the industry perspective, that’s exciting because U.S. manufacturing, particularly in a startup in this emerging technology, requires constant innovation. This is evidence that we can tap into a broader scientific infrastructure that the U.S. has pioneered.”